10 things you need to know about goniometers and inclinometers 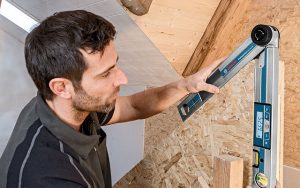 Complemented by laser levels, goniometers and inclinometers are a measuring instrument that every professional related to construction a must have in your toolbox. As the name implies, the goniometer It is used to measure the angle between two planes, and they are indispensable in any construction or repair.

There are some characteristics and uses of this Measuring instrument that you probably don’t know. We invite you to discover them in this DeMáquinasyHerram tooth article.

What are the differences between goniometers and levels?

Laser levels are used to control the horizontality or verticality of a surface. Whether they are analog or digital, their function is simply to determine if a plane is correctly leveled. Laser levels, on the other hand, offer other benefits (as we saw in a previous article): in addition to leveling, they offer the distance and angle measurement, although we will see later why it is much better to do it with a goniometer. 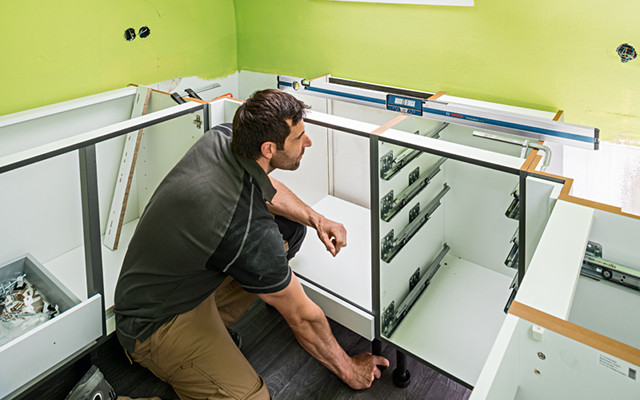 A laser level at work. Unlike goniometers, their mission is to control the level of a plane.

The goniometers in turn give us the possibility of measure acute, right and obtuse angles between two planes that can be two walls, a gabled roof, the angle between two pieces that we need to weld, and so on. Some digital goniometers They can also function as levels, and many of them incorporate a traditional bubble for this.

What kinds of jobs can be done with a goniometer? 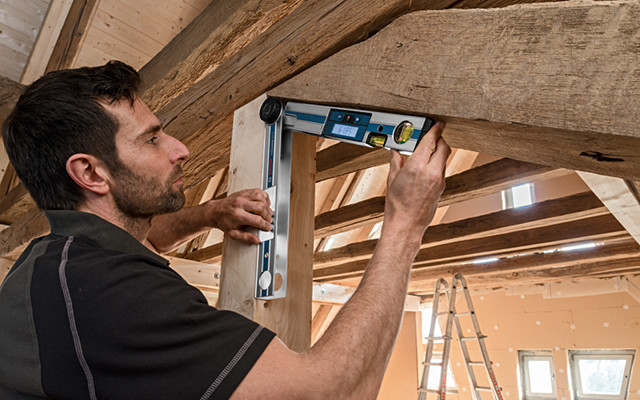 Worker checking the angle between a column and a beam. Goniometers allow these measurements to be made with surprising accuracy.

Any task that requires measure angle between two surfaces with a common edge: two walls, a ceiling (or floor) and a wall, the faces of a prism, the slope of a ramp with respect to the horizontal, and many other applications.

The digital goniometers They are especially suitable for construction tasks, although they also offer benefits in metallurgical workshops, carpentry shops and renovation and interior decoration studios.

Besides measuring angles, what else can be accomplished with a digital goniometer? 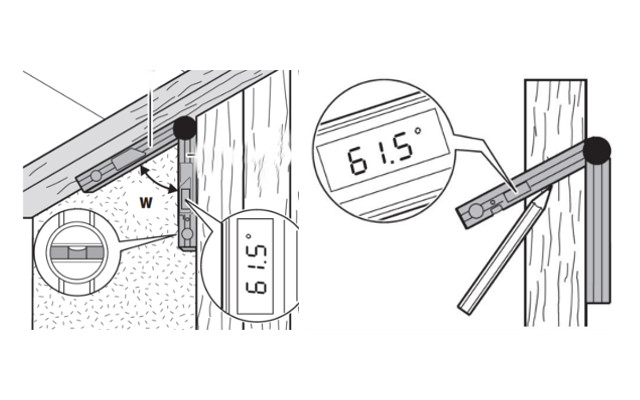 A very useful application is to transport angles to achieve a perfect fit between different parts. The operation consists of measure an angle (In the example above we see that it is the angle of a beam with respect to a wall or column) and then transport it to a rough element to make a cut that exactly adjusts to that inclination.

This is very important to make miter cuts or to fit custom furniture in a space that is false square.

What advantages do digital goniometers give me compared to the classic ones? 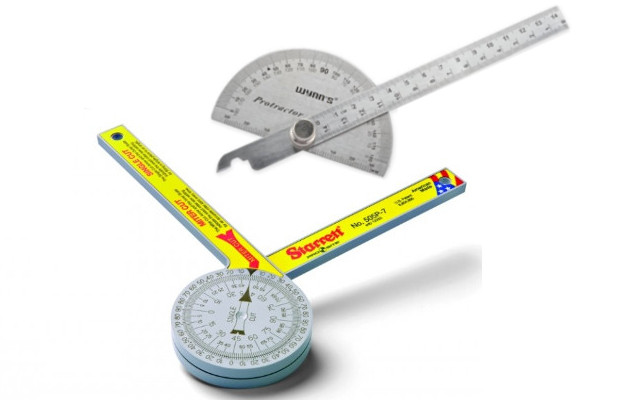 The goniometers Classics consist of a protractor with a rule attached to its center, which rotates freely from the point of attachment. The base of the protractor is applied on one of the faces, and the rule is supported on the other face. The angle can then be measured on the graduated disk.

The digital goniometers avoid having to look directly at the dial to know the measurement; in these, the angle is expressed directly on an electronic display, and in many models it is possible to convert the angle from sexagesimal degrees (the most used) to grads or radians. The most advanced models allow store measurements and then download them via Bluetooth to a computer or smartphone.

With the goniometers With classical angles, it is possible to transpose angles, but that task is cumbersome, and sometimes leads to measurement errors by inadvertently moving the ruler when drawing lines. This, with the digital goniometers, is avoided by keeping the instrument tightly adjusted. Furthermore, it is possible to request the instrument to store the measurement, so that in case of displacement the angle can be easily found.

What care is necessary when operating with the goniometers? 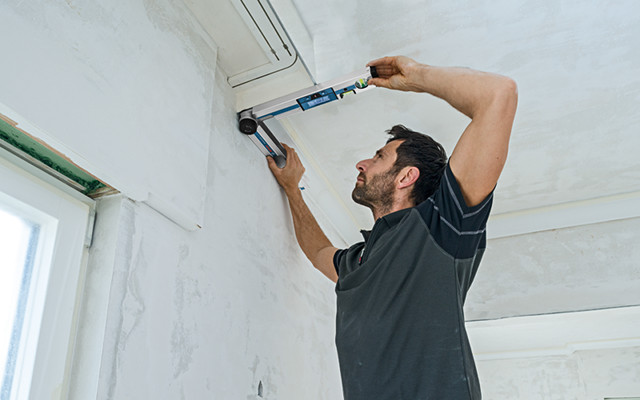 The goniometer digital it is a precision instrument. It should never be struck or forced, especially the arms and their edges, which offer a flat contact surface.

Another important factor when operating with these types of measuring tools is not to force the brake, if you have one. The goniometer must rotate freely; forcing it to rotate while the brake is applied will result in inaccurate measurements and premature wear. In addition, this could cause a kink, with which the tool it would be rendered useless.

What type of maintenance should the goniometers receive? 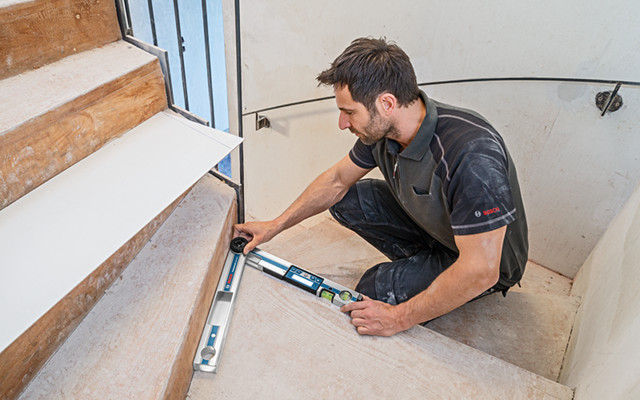 Like all precision instruments, goniometers require care both when working and when stored.

It is a precision instrument. It should be stored in a suitable case, in a dry and clean environment, away from moisture, sunlight and corrosive products. As it is generally made of aluminum, it is not necessary to apply a layer of oil to protect it from corrosion, but it is important to clean it carefully after each day, since any particle is potentially abrasive.

Every three months it is necessary to verify if they maintain the accuracy by comparing them with other goniometers. Both must have the same angle. When in doubt, always use a standard angle (whose angular opening is known).

What advantages do digital goniometers offer compared to analog ones? 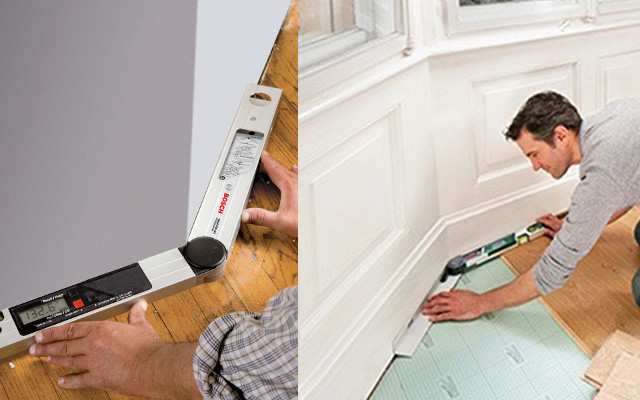 The main advantage is the speed they offer to take measurements. Simply apply them against the surfaces to be measured to instantly obtain the angle, expressed in numbers, on the electronic display.

Measurements can be stored or used as a zero for a secondary measurement or to transport the angle to other parts.

Some models allow a laser distance meter to be embedded, which makes this instrument a powerful tool combined, capable of measure angles, control the level of a surface and also measure distances.

What sizes are there for goniometers? 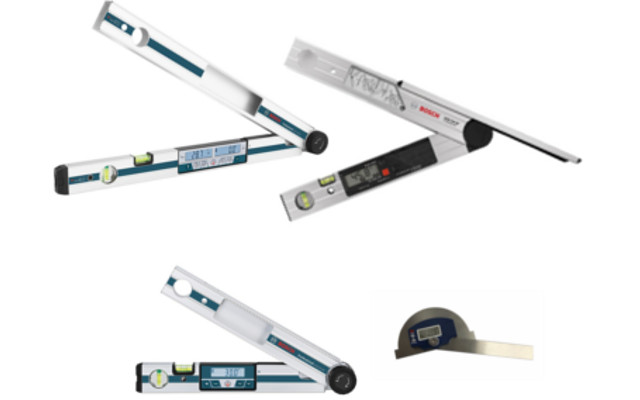 The sizes are diverse, and exist for almost every conceivable application. From the little ones goniometers designed for the adjustment of mechanical parts up to large ones, special for the construction and masonry, the range is complete and always offers the same basic functions.

How is it possible to complement digital goniometers? 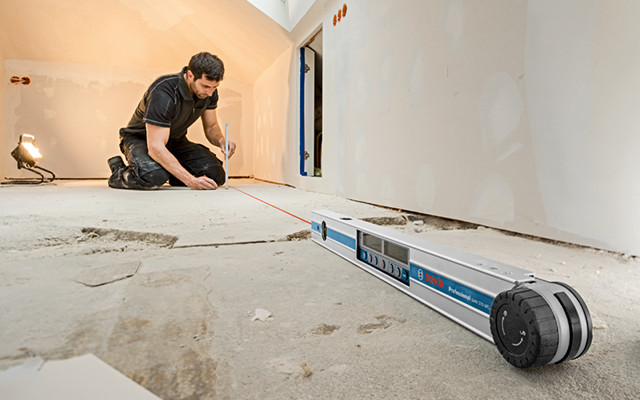 Some goniometers (especially the larger models) have an empty space in one of the arms: there it is possible to house a laser distance meter. By placing that instrument there, the goniometer is able to offer, in addition to the angle measure, the leveling of surfaces, the measurement of distances and the projection of lines.

A little known hack for this instrument is to use the laser as an infinite extension arm: the main arm is placed on the reference surface and the other arm on the surface to be measured. If you want to project the angle, simply place the laser gauge on that arm to project the red line as accurately as possible.

Which is better: a digital goniometer or an inclinometer with a laser meter? 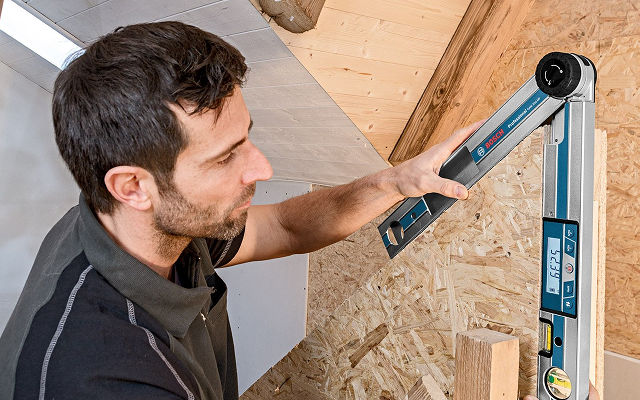 It is important to understand that there are two tools that serve different functions, and while some laser distance meters may include a inclinometer among its functions, the angle measures they offer are not as accurate as those provided by the goniometers. The goniometer provides an accurate and very reliable measurement of angles. The inclinometer it detects very well the unevenness in the surfaces.

It is possible to combine both instruments in one to achieve, as we saw before, the possibility of measuring angles, level and distance in a single tool.

What are Cup Saws and how do they work?

What are Threading Dies?