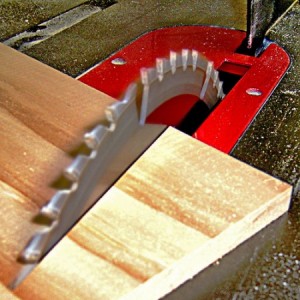 The circular saw It is one of the most used tools in carpentry, and can also be applied to cut materials such as plastics, non-ferrous metals, plaster, or even concrete. It consists of a toothed disc that, at spin quickly, allows cutting of materials.

The basic structure of a circular saw is made up of:

Disc of a circular saw

• A metallic disc, the saw itself, which has sharp teeth on its edge. They are usually made of stainless steel. Some models incorporate carbide tipped teeth that make them more resistant. The size of the disc determines the depth of the cut that can be made, while the size and arrangement of the teeth varies according to the material and the type of cut with which you want to work.
• A motor, which operates the mechanism that allows the saw to rotate to effect the cutting movement. Generally, electric motors are used, although there are some models driven by gasoline engines, and large saws in water-powered sawmills, using the same principle that was used in the mills.
• A structure that allows to manipulate the tool, access its controls, and protects the user from the most common dangers.

The different types of circular saws differ mainly in their structure and shape, since they all operate on the principle of rotating a toothed metal disk at high speeds.

The manual circular saws are tools that allow you to carry out straight and fast cuts. They are equipped with a electric motor whose power can range from 500 to 1400 W, reaching speeds of more than 4500 revolutions per minute and allow cuts of up to 75mm thick in different types of materials, of which the most common is wood. Around the sierra there is a protective casing that allows handling the saw without taking excessive risks, since it covers the edge of the same and allows to dispose of sawdust waste in a controlled way. They are equipped with a lock or safety switch that prevents the tool from being activated by accident, a guide that helps us move it straight, and a base that allows the inclination of the saw to be controlled. Some models come equipped with bags that allow the sawdust to be collected.

These woodworking tools use the same principle as large sawmill saws, the machinery remains fixed and the operator is the one who must bring the wood closer to the edge to make the cut. The toothed disc protrudes above the worktable surface, which serves as a support and guide for the material. Some models have movable supports that allow you to regulate the depth of the cut in the wood, or adjust the cutting angle. It is used to achieve quick cuts in large pieces.

It is a circular saw mounted on a structure that keeps it elevated with respect to the work table. This structure allows the movement of the saw from top to bottom, by using a crank on which the operator must exert pressure. This type of machinery for wood allows to carry out fast and accurate cross cuts on a piece of material. They are commonly used for split long pieces of wood, allowing you to make multiple precise cuts in a matter of seconds. Miter saws typically operate at a 90 ° angle with respect to the workbench, although this angle can be varied according to the needs of the operator.

Radial Bow Saws: This type of saw, like the miter saws, is also mounted on a structure that keeps them elevated with respect to the work plane. The structure has an arm that allows a circular movement with the saw. The radius of this turn can be adjusted by the operator, as well as the depth of cut that is done. They were originally designed to be able to cut long pieces of wood and make circular cuts, before the appearance of the saws that are used today.

Sawmill saw: These tools are made up of large toothed metal discs that are mobilized through the use of large engines. The saw remains stationary, and the wooden pieces Large size are mobilized by using a conveyor belt. This method is used to cut long boards, even from whole logs.

Panel saws: In this case, the saw is mounted on a structure with rails that allows to control the movement of the same. Some mechanized models allow the movement of the machinery to be controlled by means of a computer program, ensuring precise cuts. Panel saws, depending on their design, can be horizontal or vertical.

What is SMAW Welding?

What are pipe or tube benders?