Digital angle meters and their applications 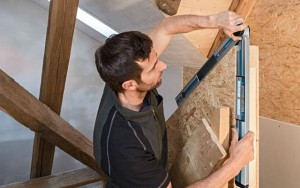 The measurement of angles and even the transfer of their value to other elements has always been a task that requires great precision and dexterity in any field of the construction industry and related applications.

To this end, technology has created various tools specifically designed for this function. This is how the rudimentary protractors that we have all used at some time in elementary school began to compete with versatile combination squares capable of providing multiple functions and aluminum or plastic analog rulers like the ones in the figure below, which not only measure angles, but that also transfer them.

However, progress has continued without pauses, as today the market also offers sophisticated digital angle gauges that can store measurements in its built-in memory and therefore fulfill the functions of its analog and other peers at a more than reasonable price. Fittingly, in this article we present some of the simplest models of digital angle gauges. By having an illuminated screen where the results are displayed, the measurements are not only much more precise, but also provide greater user comfort without adding complexity to the handling of the instrument. In fact, there are more complex models that incorporate several functions in the same tool, since in addition to angle gauges there are bubble levels and inclinometers with projection of a laser beam.

The usefulness of digital angle gauges extends to a variety of activities. Consider, for example, the installation of doors and windows, as well as the construction of roofs and stairs. These instruments will allow us to measure and transfer angles of frames of doors, windows and beams, and even equalize the bars between the railing and the staircase. If we apply them in a commercial premises, for example, we can measure angles and inclinations to adjust the objects on display.

But there is more. For example, if our activity is related to the wood industry, has it ever occurred to us to have a good precision cut measuring instrument to use in combination with our miter saw or miter saw? If so, then it will be useful to find out that the current market has such an instrument.

Next we will present two of the most recent models of digital angle meters that we can purchase according to our needs and budget. Constructed of aluminum, both are very similar in appearance, they present a robust and compact design, resistant to dust and splashes of water, they have many features in common, of which the precise measurement of angles stands out. at the push of a button and memory function to retain frequent measurements, and can be used both indoors and outdoors.

These meters are basically powered by regular AA batteries, and have a base arm and a swing arm. An extension (usually supplied by the manufacturer) can be attached to the latter to use the instrument in places that are difficult to access or when the length of the support surface is less than that of the folding arm.

The most economical, which we will call Model “A”, is the one in the following figure, a digital miter angle gauge (function “Miter”) and bezel (function “Bevel”) provided with horizontal and vertical bubble levels, and does not require prior calibration. 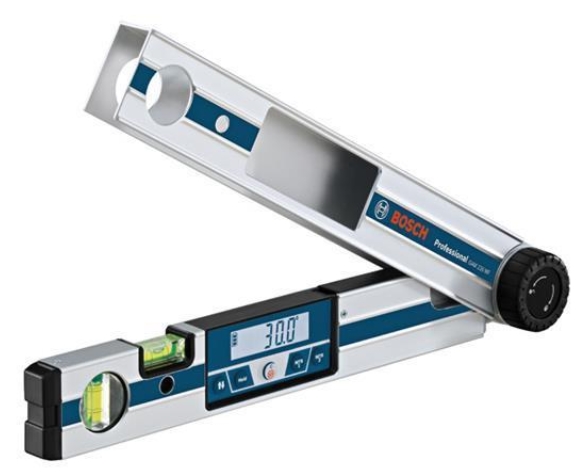 If we want greater versatility, we can acquire a somewhat more complete design, which we will call “Model B”, with a double screen, as we can see below, which also incorporates the functions of the previous meter and the inclinometer and laser beam to transfer inclinations. This means that this model combines four tools in one: digital measurement of angles and inclination, miter function and laser point. 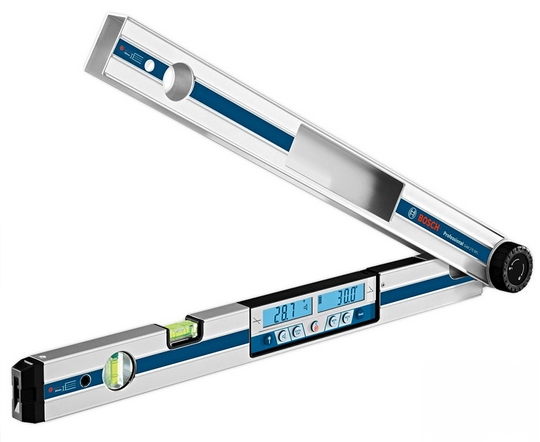 On both models, the display is backlit and rotatable, making it easy to read from any position. The instruments also have a hold function (“Hold”) to save and transfer measurement results at the touch of a key, as well as a mechanical locking function by means of a screw, which allows the precise transfer of the measured angle.

Now let’s briefly examine a detail of the screen of each model, to check the functions of each one and see some applications to understand how they work.

The figure above presents an image of the screen of this model, which allows to visualize the effect of rotating the screen and the keys. “Hold ” Y “Miter”.

Applications of Model “A”

Every time we turn on the meter, it defaults to operating mode “Measuring angles”. 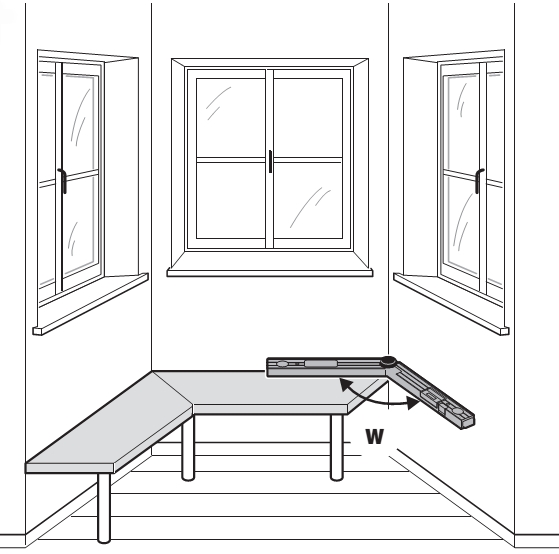 How to measure Angles?

Therefore, to measure an angle as for example shown in the previous figure, we simply support the folding arm and the base arm on the surfaces to be measured. The value shown on the screen will correspond to the interior angle “w” (see figure above) formed by the base arm and the folding arm. This measurement value will remain indicated on the screen until a new measurement. 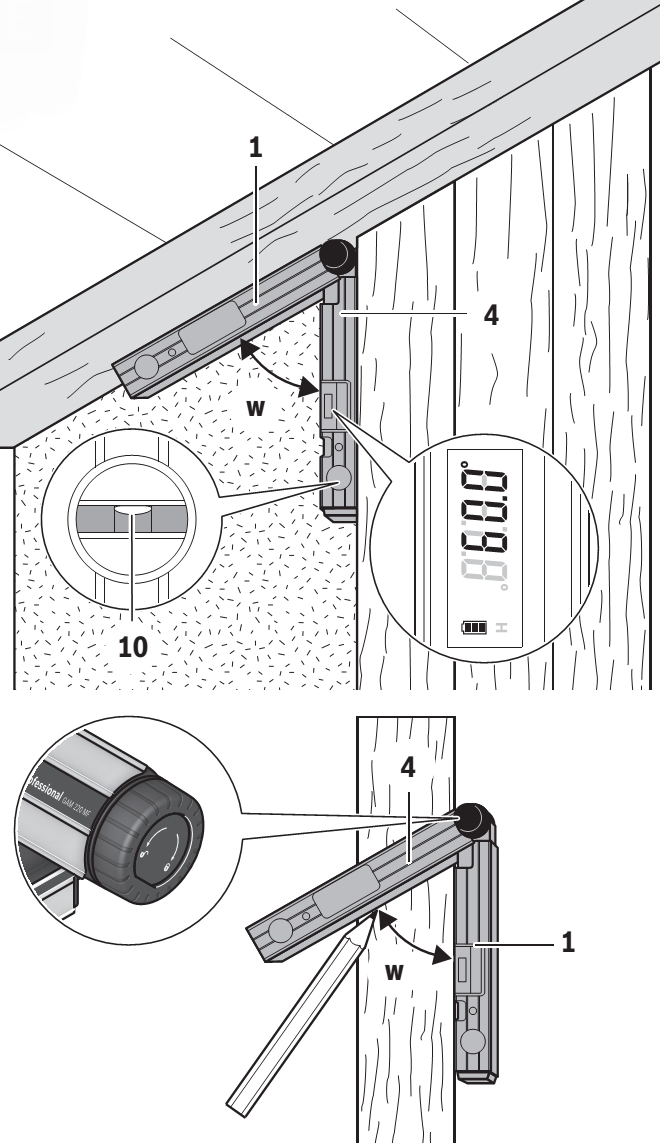 How to transfer Angles?

First we measure the angle to be transferred as we proceeded in part “a”. Then we adjust the fixing wheel 3 (see figure above) to mechanically secure the position of the arm. The indicated value is not memorized. Finally we seat the gauge in the desired position on the workpiece and use the arms as a ruler to draw the angle.

How to save the measurement values?

To memorize the current measurement value, briefly press the key “Hold”, after which the corresponding value will flash on the display and will not be changed by movement of the arm. If we press the key again “Hold”, the value will be permanently displayed on the screen and will change according to the movement of the arm, but it will be stored in the memory, unless the batteries are exhausted.

As indicated above, the arm extender makes it possible to measure angles when the support surface is shorter than the folding arm.

This mode, which is activated by pressing the key “MTR1”, is used to calculate the cutting angle for two pieces that together form an exterior angle “x” less than 180 ° (for example, baseboards, stair railings or picture frames).

To do this, we first measure the angle “x” in the usual way (see figure below). 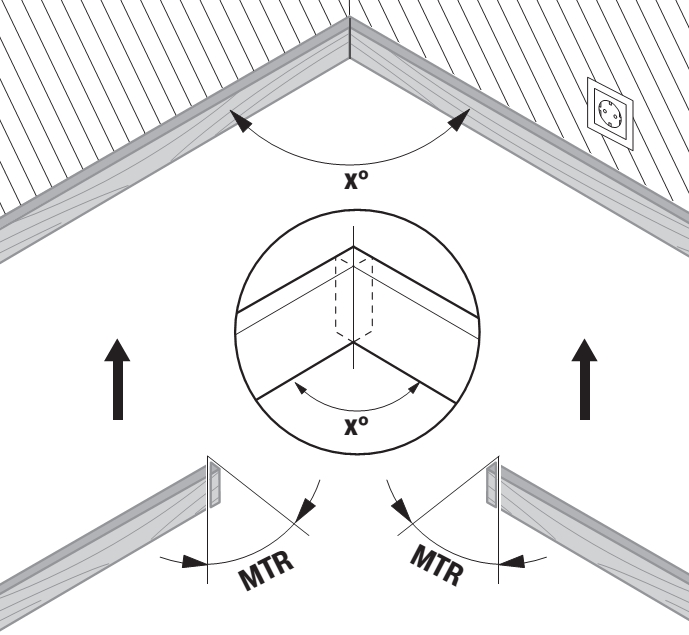 Then we press the key “MTR1” and the screen will display the calculated horizontal miter angle to be adjusted on the miter saw, as well as the indicator “MTR”. In this type of miter cut, the saw blade must be positioned perpendicular to the workpiece (0 ° vertical miter angle).

This mode, which is activated by pressing the key “MTR2”, is used to calculate the horizontal and vertical miter angles needed to exactly fit two pieces that form compound angles (for example, in ceiling molding).

To do this, we must follow a series of steps in the order indicated and illustrated in the table below: 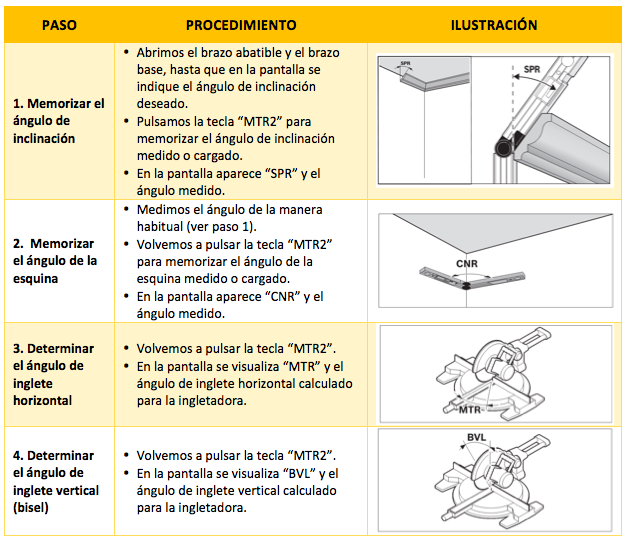 The double screen of the Model “B” allows us to visualize the additional functions with respect to the Model “A”.

In principle, we observe on the screen of the angle meter the common functions “Hold”, “Miter1” Y “Miter2” identical to the previous model. However, there are new features, such as laser, sound and unit calibration, which are functions of the inclinometer.

Applications of Model “B”

f) Measurement or transfer of inclinations

The laser enables non-contact measurement or transfer of inclinations up to a distance of 30 meters indoors, with a vertical leveling accuracy of 0.5 mm / m.

The attributes of the laser “Model B” are indicated by the following pictograms:

Both types of calibration follow a series of simple steps detailed and illustrated in the user manual supplied with the tool.

In conclusion, the following video summarizes the main functions of the Model “B” and we see practical applications that will help us understand how it works in a real environment.

What to consider when joining plates with a woven tape

What are the accessories for drills and what to consider when choosing them?