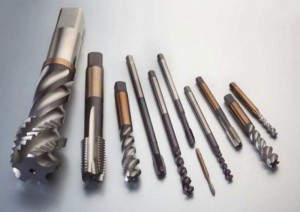 The bits or bits are cutting tools to be used with a drill or lathe. These tools perform a mode of machining called drilling, which consists of creating holes in different metallic materials. exist diamond drill bits used for cutting materials such as ceramics, porcelain tiles, etc.
A characteristic of the bits is that they have a helical body through which the chip comes out.

It should be noted that this tool is used with lubricants of machining to maintain its useful life. Chip formation is determined by the material of the workpiece to be drilled, the geometry of the drill, the cutting speed and to a certain extent by the type of lubricant used. Chip shape and length are acceptable as long as they allow effective chip removal.

The drill bit helix Its objective is to evacuate the chip, but it also has another function, which is to cut and dismember the residues from the drilling of metallic materials into smaller pieces. Due to the physical characteristics of the metal, the chip tends to come out of the helix in loops, which, if not segmented by it, would increase the friction of the tool against the piece to be drilled, producing the following undesired effects:

For the reasons stated, the importance of efficient chip evacuation and the preponderant use of coolant are highlighted.

Constituent elements of a drill

There are countless bits or bits with different applications but they are differentiated by their technical characteristics, which arise to be able to drill in different materials.

overall length of the drill: There are extra short bits, short, normal, long and extra long. These last ones are used with a drill press in order to drill deep into a surface and that the drill bit is not damaged or spoil the hole.

Cutting Length: It is the maximum depth that can be drill with a wick and is defined by the useful length, which is determined by the extension of the propeller.

Cutting Diameter: is the diameter of the hole obtained with the drill.

Cutting Angle: The normal cutting angle in a drill is 118º at the tip, but there are also drill bits of 135º so that the greater the contact with the material, the wick self-centers and does not slip on the surface.

Handle diameter and shape: The handle of a drill can be cylindrical, triangular or conical. The cylindrical shank It is the most common, but it should be noted that there is a subtype that is the reduced shank, which consists of a reduction in the size of the shank in drills whose diameter exceeds 10 mm or 13 mm, so that the drill can be used in mandrels of the mentioned measures. As for the triangle handle, it is a bit with notches on the surface that are in contact with the chuck so that the tool does not slip; It is customary to make this modification in bits intended for drilling very hard metals, such as alloy steels, dies, etc. Por last are those of tapered shank, that have the peculiarity of being positioned on a special drill chuck, they are usually used to drill deep and thick holes.

helix angle: Depending on the material to be drilled, the wick it can have a particular angle to cut the chip and evacuate it. There is a series of letters to identify the application and the angle of the bit: N is the 30º helix angle for general use, W corresponds to the 40º/45º angle intended for machining Aluminum and long-chipping materials. Lto type H, is known as the slow helixDue to its long helical pitch at an angle of 15º/20º, it is ideal for bronze and other materials with large-volume chips. Finally, there is the helix type yes with an angle of 35º and standing out at first sight the quality of having a dense groove for rapid chip removal; This type is used for stainless steels.

Constituent Material of the Wick: Mecha can be built with the following materials:

Laminated Drills: its preparation is carried out from a metal piece that on one side has a cylindrical sector (which will later be the end of the drill) and on the other side there is a flat part, whose thickness is less than the other sector. Then through a rolling machine (hence its name) the flat part is taken and the helical shape is given by twisting it. They are very cheap bits, therefore their performance is very low. The cutting tip is not self-centering (split point).

Rectified Drills: these bits are made from a cylindrical metal piece, whose helices are achieved by grinding the metal with a stone. The grinding process is more exact than the rolling process and gives this drill a higher quality than the previous one, with higher performance. It also does not have a self-centering cutting tip (split point).

Milled and Ground Drills: they are produced from a cylindrical piece whose helices are achieved by grinding the metal with a stone and then a milling cutter is used to make recesses in the helix, facilitating chip evacuation and at the same time providing an aid to drilling progress. The quality of these bits allows you to give the user a higher performance than the other two and a better finish. The cutting tip is self-centering with an angle of 135º. All wicks for professional use are built in this way.

Finish: Depending on the use and application of the wick, a layer of black oxide or nickel coating is applied from the cutting point to the handle. Usually these finishes are to prevent tool rust and the choice of one or the other is a cultural issue in the markets. In some countries the wick with a shiny finish enjoys a higher quality status than those with a black finish, in others the opposite happens.

There are also coatings that are usually partial but their function is to give a drill greater durability, give it better performance, avoiding premature wear, facilitate the separation between the material to be machined and the cutting tool, and lastly, thermal insulation. These include titanium nitride-coated bits, with their characteristic yellow color, and TiAlN (titanium aluminum) bits for dry drilling on computer-controlled machining centers. It should be noted that a disadvantage of the coating is the impossibility of sharpening the bit once the edge has been lost, because by doing so, the performance of the tool decreases.

chilled drills: They are hollow drills in which the cooling liquid passes through their interior and goes directly to the cutting point. They are used to quickly evacuate the chip and in conditions where it is necessary to drastically lower the temperature that arises from machining.

Center Drill: This drill is used to drill a piece that is going to be used in a lathe, if the piece to be machined is of little weight, it is usually left as a tailstock. If the piece is heavy, the function of the drill will be to make the hole for a tailstock to enter.

Magnetic Base Drill Bit: These bits have a double cutting geometry for perfect centering of the tool. Heat treatment gives them a longer useful life. In addition, they are capable of drilling with superior performance to high speed steel drill bits and Morse taper bits.

Its operation is detailed below:

3) The pilot guide ejects the excess cylinder. At the end of the operation, the core of material is expelled by a pin driven by the force of a spring. This pin also serves as a centering point when starting the operation and as a lubricating oil bypass valve.

Conical blades for plates: Its function is characterized by making holes of exact diameter in metal sheets . The most used are the stepped ones, since they have in their body the measurements of the holes to be produced.

What is brushless technology (without carbon) and what are its advantages?