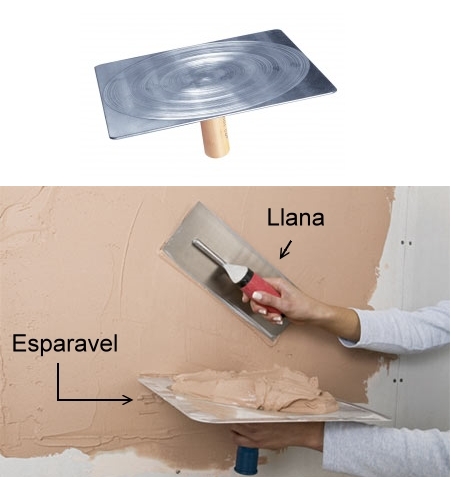 Since ancient times, the finishing of surfaces with and without formwork, such as facades, walls, ceilings, floors and slabs, has required the use of various continuous coatings, either for protection and embellishment or to prepare the surface for subsequent treatment (for example, laying ceramics, tiles, etc.).

These continuous coatings can be done both manually and mechanically through the use of cement mortar, lime, And that, synthetic resins and others. Depending on the material used, different types of coatings arise, such as, for example, the plastered (which uses mortar with a cement binder or a mixture of lime and cement), the revoked (plaster or lime mortar that is applied in successive layers until the desired appearance is achieved) and the stuccoed (which uses several layers of lime mortar) among others.

All these types of coatings involve the use of various tools. Among the hand tools is a group that has survived centuries of use and is still widely used today. The best known tools of this group are: casting net, float, trout, trowel Y spatula.

It is important to note that the names and uses of these surface finishing tools may vary by country or region, and even the skill of the worker, so we will describe them in the widest possible context.

The casting net (not to be confused with the utensil of the same name used in fishing) or pastry plate it is simply a lightweight square platform, with or without a side rim, that has a central vertical handle. Its size varies from approximately 20 x 20 cm to 35 x 35 cm and it is usually constructed of aluminum, magnesium, plastic or wood, although it can be improvised on the job site from many different materials.

The functions of the casting net There are basically two: a) transport the mortar from the place where it is obtained to the place where it is going to be applied, and b) once in the workplace, it is held with the less skilled hand, while with the other it is taken, with the application tool, the portion of mortar necessary to throw it and spread it on the desired surface.

In some cases the casting net is usually replaced by a float to perform exactly the same function. In any case, it is clear that, although it is possible to use the float to spread the mortar, the casting net it does not serve this purpose, but only to hold the mortar as a “tray”.

Unlike casting net, the float it is a rather rectangular (or pointed) rather than square platform, and instead of having a vertical handle it has a transverse handle. It is narrow but relatively long, about 50-60 cm and can be made of wood or plastic.

Frequently, the float and the trout they are considered synonyms and are used for the same purpose, which is to spread the mortar on the surface and equalize the planes. However, many users do not consider the use of the float for this purpose, since due to its size it is difficult to impose enough force with the arms to satisfactorily press and adhere the mortar against the wall. Therefore, in many cases, the float ends up fulfilling the same “tray” function as the casting net. 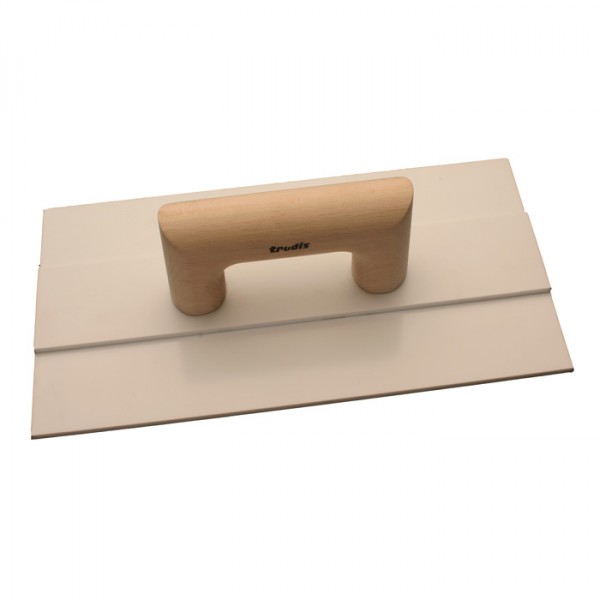 The trout (or fray, fleet or trowel) is very similar to float, although smaller, and it is not only the indicated tool to spread the mortar on plastered or stuccoed surfaces and not wall and floor formwork, but also gives the name to the operation of “floated”. Troweling consists of pressing a surface in a circular motion or in swirls (hence this tool is also known by the name of “swirler”) above the coating, but without exerting too much pressure, but rubbing and applying water on the surface to achieve better compaction. This operation is carried out with fresh mortar and before it begins to set.

With the trout it is possible to fill voids and hollows, level out protuberances left by previous operations and impart a texture to the surfaces, which remain perfectly flat, but coarse and rough, with the necessary grip to receive successive layers, although they can be left as they are, according to the need . The action of trout has the peculiarity of leaving the open pores, which contributes to a significant decrease in the shrinkage of the mortar once it dries.

There are several types of trout and are made of various materials. These materials can be:

Also common is angular trowel, which is aluminum or stainless steel, has flat surfaces that bend at an angle, and is used for finishing inside corners of plastered walls. 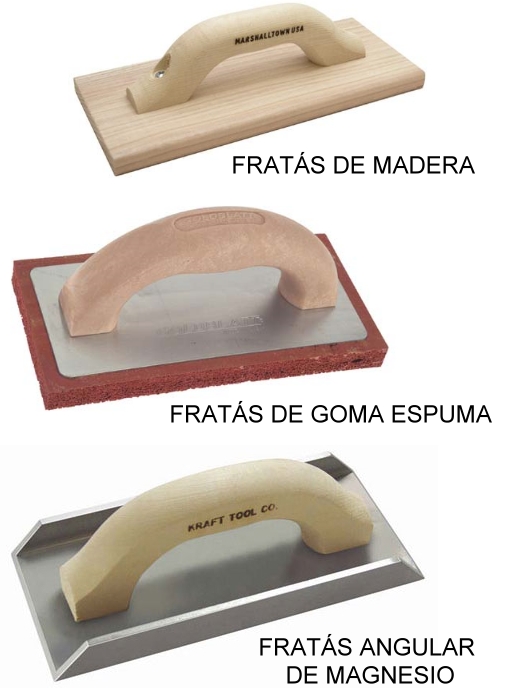 a special kind of trowel for floors, called bulldozers, are rectangular flat pieces, made of wood, aluminum or magnesium, and much longer (from 1 to 2.5 meters) that are used in the first operations of leveling the concrete or plaster, before applying the trowel and do the finishing. They can even include a handle for ease of use when smoothing unformed fresh concrete surfaces. 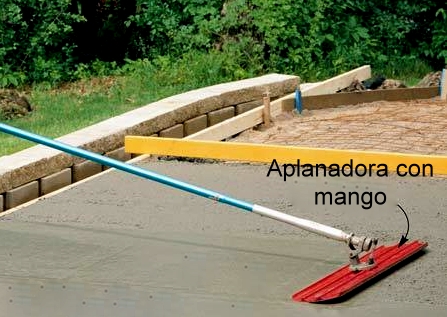 The trowel differs from the other tools we have seen because it is made exclusively of metal, in particular, iron O well stainless steel. It is a perfectly flat sheet similar to trout and has a wooden or plastic handle that can be opened or closed.

The trowel it is used both on walls and floors, mainly to apply, distribute and smooth render and plaster; also to hold a small amount of plaster mortar that is being applied with the trowel. Some are covered with felt on the side opposite the handle and are used to moisten and smooth the surface to be plastered. Since it has the peculiarity of attracting water and binder closing the pores, the trowel you can only spread very thin layers (otherwise the mortar could crack) on plaster and with very fine aggregate mortars.

The shape and size of the leaf trowel they are determined by the purpose for which the tool is used and the manner in which it is used. For this reason there are different types of trowels, as we see in the following figure, where the numbers correspond to the description that follows. 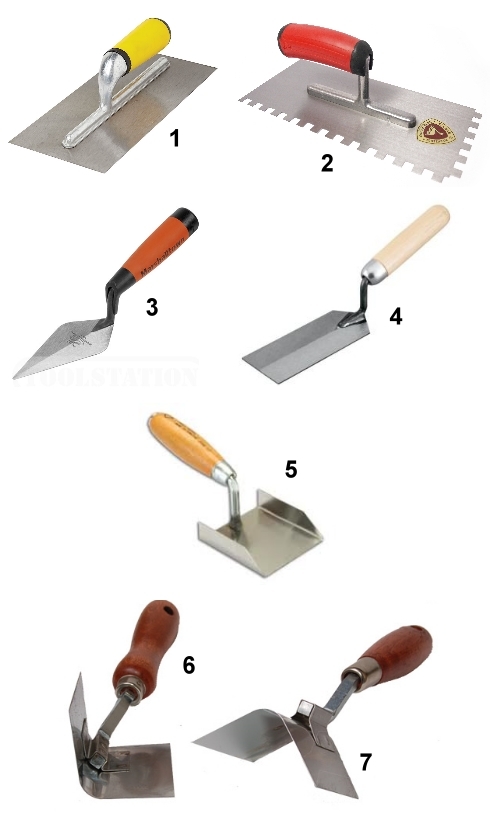 1 – Rectangular smooth: with a blade approximately 10 cm wide by 25-30 cm long, it serves as the main carrier and manipulator of the mortar.

2 – Rectangular toothed: It can have two types of blades that come in different sizes: a) one with small «V» notches around its perimeter, b) another with deep «U» or square notches on one side and one end, while the others two edges are straight as in a smooth rectangular trowel. It is used to apply the setting material mortar or other types of adhesive used to install natural stone and ceramic tiles. The kind of operation performed with notched trowels is called “hairstyle”. The figure below shows the different types of toothing. 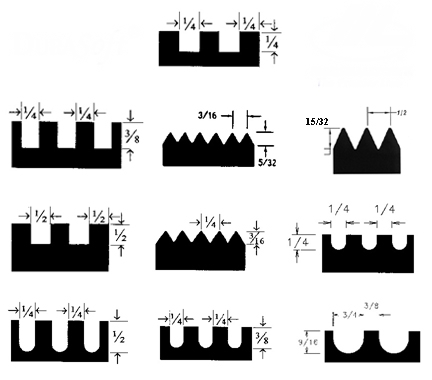 Types of notches (measured in inches)

3 – Pointed: about 5 cm wide x 25 cm long, it is used to finish the mortar joints between bricks and to apply new mortar to a joint whose mortar has deteriorated.

4 – Flat: is smaller, similar to the pointed trowel, but with a square end instead of a point. It is used to apply and smooth material in areas where a larger trowel would be inconvenient.

5 – Angle: is very similar to angular trowel and is used for finishing the angles of corners formed by adjacent surfaces at right angles.

6 and 7 – For inside and outside corners: they consist of a sheet of steel bent to form a 90° inside (6) or outside (7) corner. Depending on the required finish, the edge between the two halves of the sheet generates a radial or square edge.

How to maximize the use of a pressure washer? Recommended uses and applications.

How to choose a chain saw sharpener?