How are Construction Plumb bobs used?

Every time you want “plumb” an element, that is, give it the condition of verticality, verification instruments are used. Both the spirit level and the plumb They fulfill this function, and have wide application in construction, carpentry, blacksmithing and surveying.

The plumb -not to be confused with those used in fishing- it is one of the oldest tools in construction. Evidence suggests that Egyptian architects used plumb lines to establish verticals in the construction of the pyramids. Not only plumb bobs have survived to this day, but their employment is vital and although technology has advanced with the sophisticated laser plummet available today, the instrument as it is known in its primitive form is a must on any construction site.

The plumb it uses the law of gravity to establish what is truly “vertical.” The underlying principle is easy to understand: a suspended rope containing a weight at the bottom will be vertical and perpendicular to whatever level plane it passes through. In fact, it can be considered plumb as the vertical equivalent of the spirit level.

Parts that make up a plumb bob

The basic tool consists of:

TO. A weight made of lead (or aluminum, steel, brass, other metal, or even plastic) that is cylindrical, conical, or a combination of both. The plumb bobs Machined and balanced, they have a tapered or pointed end.

B. A spool-like piece called nut, which can be made of wood, metal or magnetized metal, which is the same thickness as the weight TO and that has a hole in the center.

C. A rope, string or thread made of cotton or nylon that, passing through the hole in the nut, joins both pieces. Nylon ropes are preferred for masonry because they have greater resistance to moisture.

In addition to its application in the construction industry and others, the plumb it is also useful in the home. When a door is installed it is used to check the verticality of the frame. If you want to place accessories or decorative items in relation to a surface or other object, insert a tube into another, or establish the verticality of a chimney or a storm drain, the plumb line it will be of great help.

Parts of a plumb bob

How to use a plumb bob

For the correct use of the plumb and obtaining accurate readings should be followed these simple steps:

Depending on the application and the material in which they are built, there are plumb bobs small that do not weigh more than 30 grams and other more robust that oscillate between 400 and 600 grams. In all cases, its cost is extremely affordable. In models with pointed ends, it must be checked that said point is not bent or misaligned due to use. If so, the plumb it will need to be replaced.

Today the laser plummet They have become popular, although they cost almost 10 times more than conventional ones. They are small, common battery-powered, tape-measure-like instruments that project a laser beam in the spectral region around 600 nm, directed vertically and also (on some models) horizontally. The advantages over plumb bobs Common are the high precision and speed of the measurement, as well as the versatility, since they are not affected by environmental conditions such as wind and can be mounted on the ground, on the wall or on a tripod for easy use, freeing both hands from the operator. 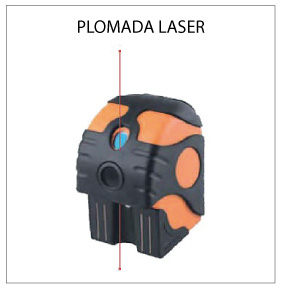 The following video shows some applications of a plumb provided with both vertical and horizontal projection of the laser beam.

What to consider when choosing a plasma cutting table? Part IV

What are the accessories for a welder?

Digital angle meters and their applications