How do Ammeters work? 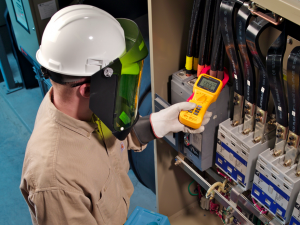 The current detection and measurement has been the function of a widely applicable instrument for more than a century: the galvanometer. However, the galvanometer generally supports intensities fairly weak highs. To allow the measurement of currents higher than those that could withstand without destroying the windings and mechanical elements of the apparatus, a resistance of very low value known as “Shunt” (shunt) arranged in parallel with the winding so that only a fraction of the main current passes through it. This coupling galvanometer + shunt has given rise to another instrument known as ammeter, which specifically measures electric current intensities.

What is achieved with ammeter, then, is that most of the current passes through the resistance of the shunt, but that the small amount that flows through the meter is still proportional to the total intensity. The ammeter owes its name to amp (A), which is the unit of measure you use. When the electrical currents to be measured are below 1 ampere, these instruments are called milli, micro, nano or picoammeters, depending on the magnitude involved.

The operation of the ammeter It is based on a principle of electromagnetism that in its simplest form tells us that any electric current that passes through a conductive wire produces a magnetic field around it, the strength of which depends on the intensity of the current that circulates.

The ammeter always installs serially with the element whose intensity you want to know. Being in series with the electrical circuit it is necessary, so that its influence is minimal, that its internal voltage drop is very small, so its resistance will also be very small.

The aforementioned foundation has been the origin of the first analog ammeters, still widely used today, that measure and present the value of the current by means of a needle which is located in the number or fraction of the value presented in an indication panel.

Within the analog ammeters We distinguish two groups that differ in the mechanism that causes the movement of the indicator needle:

While the thermal ammeters have practically fallen into disuse, electromechanical represent a large subgroup that includes various types of ammeters. Let’s look at this in more detail.

Generally speaking, these devices are based on the mechanical interaction between currents, between a current and a magnetic field or between electrified conductors. They are essentially composed of a fixed member and a mobile member attached to a needle that indicates the value of the magnitude to be measured on a scale. The movement is rotational and is caused by a motor coupling which is a function of the parameter to be measured. This movement is counteracted by an opposing torque and to avoid oscillations the moving part is provided with some damping device. The value of the input current is therefore given by reading the displacement of the needle on a graduated scale.

Like all electromechanical devices, this type of ammeters it is bulky and is subject not only to component wear, but also to misreading. However, the reading is fast and therefore they are useful as fixed measuring elements on boards.

Between the electromechanical ammeters we can mention the following.

They consist of a fixed permanent magnet and a frame or moving coil that rotates under the effect of the Ampère force when current flows through it. The spiral on the axis of the frame tends to prevent the frame from rotating. The greater the current through the frame, the greater the angle it rotates. The box is attached to a needle whose end is moved by a ladder. The instruments magnetoelectric are distinguished by high precision and high sensitivity, but they only work in circuits of direct current (DC).

b) Electromagnetic or moving magnet ammeters

These instruments consist of a needle attached to a magnet housed inside a coil. When the current circulates through the latter, a magnetic field that, depending on its sense, produces an attraction or repulsion of the magnet that is proportional to the intensity of said current.

They consist of a fixed coil, inside which is housed and welded a sheet curved soft iron. The moving part is a second sheet of soft iron, which is attached to the steel shaft of the indicator needle. When current flows through the coil, both iron sheets they become magnets by the magnetic effect of the current and mutually repel each other, obtaining a force proportional to the intensity of the current. The magnitude of the repulsive force, and consequently the amplitude of the needle’s motion, depends on the amount of current flowing through the coil. These devices have the advantage of serving both for direct current (DC) as alternating (AC).

They consist of two coils, a fixed and another mobile that produce magnetic fields, each of which carries a current that is a function of the current to be measured. The reaction between the fields of the fixed coil and the voice coil provides the deflecting torque of the mobile system, which is compensated by spiral springs that are also used to carry current to the voice coil. They are mainly used with alternating current (AC), but they also serve to DC (DC).

The appearance of all the ammeters we’ve seen so far is similar, as the following images show.

But there is a symbology printed in a corner of the display of each instrument that allows to differentiate, for example, a moving iron ammeter one’s electrodynamic or one that works for DC from another that works for both DC and AC, etc. In future installments we will address in more detail the symbols used in electrical measurement devices.

These instruments are based on the principle that all drivers they dilate when they get hot. This expansion is proportional to heat and, according to the joule’s law, the heat is proportional to the square of the current, regardless of the direction of the current and its nature, so these ammeters they serve for alternating current or keep going. The current passes through a resistor, which heats up as the current passes through and is in contact with a thermoelectric couple, which is connected to a galvanometer. This indirect method is used mainly to measure High frequency ac.

The advantage of thermal ammeters is that they are not affected by external magnetic fields. However, the high consumption required to heat the conductor, which will experience expansion due to the current flowing through it, and the high cost of these devices mean that they are rarely used.

Technological advances have imposed on the market digital measuring instruments, of great versatility and performance. With digital instruments, reading errors are eliminated, as measurements are displayed on a screen Through a number and as moving mechanical parts have been replaced by electronic circuits, wear and tear is also minimized. The quality of an instrument digital It will therefore be subject to the quality of the circuits used.

In the case of digital ammeters, you get exact intensity measurements so much for DC What alternate with selectable scales depending on the model. 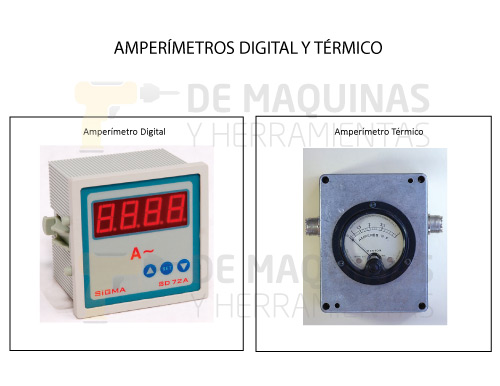 Today digital technology has not only provided more reliable direct measurements through permanently installed instruments, but has also enabled the early acceptance of portable instruments.

Two of the most widely used portable electrical measurement instruments are the Multimeter and the amperometric clamp. Both are available in the market in their versions analog Y digital, although the latter is the one that has been imposed the most. Both the multimeter and how to use it have already been described in DMYH, so we will briefly deal with the clamp meter.

This is a kind of ammeter (also know as clamp ammeter or from hook, by its shape) very useful because Instantly measures the intensity of alternating or direct current without opening or interrupting the circuit. The amperometric clamp is driven entirely by the magnetic field created by the current and, as it does not have electrical windings, it cannot burn. The jaws are opened by moderate pressure of a finger on the trigger and close automatically, requiring only one hand. They can measure both in alternating current What keep going.

In fact, amperometric clamps have also evolved into multimetersHowever, its use as ammeter it is extremely broad in the field of electricity in general, including in the automotive industry. The videos that follow show in detail the use of a amperometric clamp.