How does autogenous welding work?

Often the terms autogenous welding Y oxyacetylene welding they are considered synonyms and are used interchangeably. Actually, this is an error, since both denominations do not describe exactly identical processes.

Welding is a discipline that involves multiple classifications and from there arise the various types of welding that we previously mentioned in other technical articles.

However, if we take into account the characteristics on which welding is based We can establish a basic classification into two large groups:

In the following table we mention the main differences between both groups and we can clearly see what the so-called autogenous welding.

Based on the information in the table above, the autogenous welding It is simply a type of homogeneous welding that is carried out without filler metal.

It is worth saying that any welding process that is carried out on equal metals (base metal) by melting them without using filler metal or rod and that when cooled form a continuous trace of metal receives the general name of autogenous welding.

In order to clarify the confusion that we raised at the beginning, we can appreciate that the oxyacetylene welding can only be considered autogenous if done in the absence of filler metal.

Once the clarification has been made, we will now briefly describe the process of oxyacetylene welding without filler metal, which is the most widespread type of autogenous welding and that, therefore, from now on we will call simply autogenous.

The foundation of autogenous welding It consists of joining equal metals by melting them with the heat of a flame produced by the combustion of a mixture of gases that is generated and projected through a blowtorch. Usually these gases are oxygen (oxidant) and acetylene (fuel), although they can also be oxygen and propane or others.

The basic equipment of autogenous welding It is the one described in the following figure. 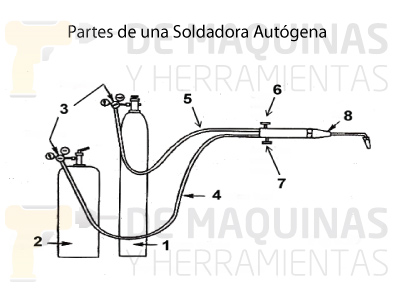 Parts of an Autogenous Welder

2 – Acetylene cylinder: contains porous material saturated with acetone. Since free acetylene cannot be safely compressed above 15 psi, it is dissolved in acetone, which keeps it stable and allows a pressure of 250 psi.

3 – Pressure regulators: They maintain the constant pressure of the gases, ensuring a stable volume and equal quality of the flame. Most regulators are two-grading and have two gauges: one indicates the pressure in the cylinder and the other the pressure entering the hose.

4 and 5 – Hoses: although the figure shows them separate, they can be joined or taped to prevent them from becoming entangled. They have different colors, being green or blue for oxygen and red or orange for acetylene. Oxygen connectors have right-hand threads and acetylene connectors have left-hand threads.

6 and 7 – Control valves: They are of the needle type with a butterfly screw and control the flow of gases entering the mixing chamber.

The main parts of the torch are: opening and closing valves, the mixing chamber and the nozzle.

The nozzles are detachable parts and of different types and sizes, since when welding different thicknesses of material a corresponding heat supply from the oxyacetylene flame is necessary. They are usually made of copper alloys and the measurements are determined by the diameter of the orifice hole at its end. Normal equipment has three or more nozzles. Too small a nozzle will excessively delay or make it impossible to melt the base metal. Too large a nozzle can result in burning of the base metal.

From the mouthpiece comes a call, the call oxyacetylene flame, in which clearly differentiated areas are distinguished. Depending on the gaseous proportion, there are three types of flames, as we see in the following figure. 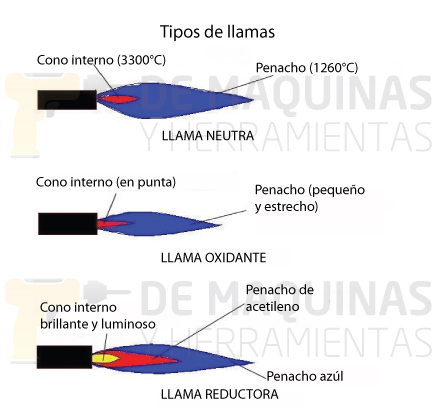 neutral flame: It is the most used, since it is the one that is achieved when enough oxygen is supplied to carry out the combustion of all the acetylene present. It is also the most advisable to preserve the properties of the material. It is used to weld cast iron, malleable steel, mild steel, bronze, stainless steel, and 12% chrome steel.

oxidizing flame: the proportion of oxygen in the mixture is greater than that of acetylene. It is recognized by its shorter inner cone and plume, as well as its higher-pitched sound. It is used for brass with large percentages of zinc and bronze alloys.

reducing flame: with excess acetylene, it is recognized by an intermediate reducing zone (acetylene plume) that appears between the cone and the blue plume. It is used only in particular cases to weld carbon steels, cast steels and their alloys, cast aluminum and special steels.

Once we have the equipment ready and we have selected the appropriate nozzle for the thickness of materials we want to weld, we must follow a series of steps to carry out welding correctly and safely. The order of these steps is as follows:

The advantages of autogenous welding They are to bring together a portable and economical equipment, to be able to be used in the four welding positions (flat, vertical, horizontal and overhead) and to weld all kinds of thin metals, both ferrous and non-ferrous. Its main disadvantages are that it is uneconomical to weld thick thicknesses and has low productivity and difficult automation. In addition, the high concentration of heat causes warping and the process itself introduces a large number of impurities into the weld puddle.

For these reasons, the autogenous welding is losing ground to arc welding. However, it is still frequently used in the area of ​​maintenance, repair, welding of small diameter pipes and light manufacturing.