How does the Belt Sander work? 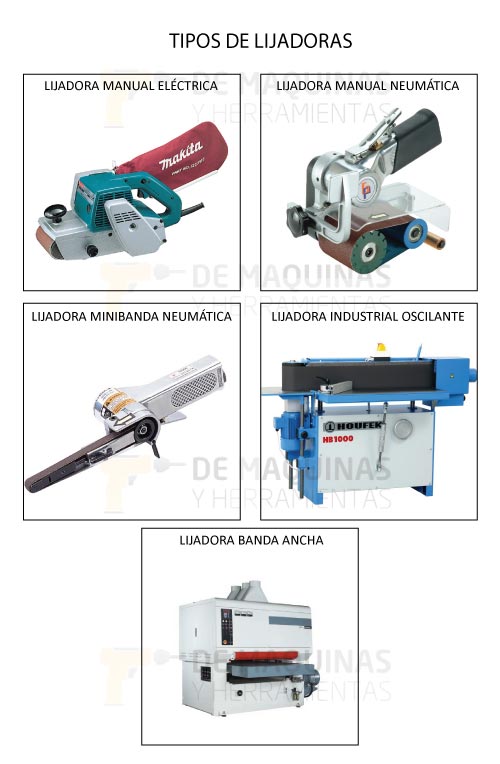 Although there are different types and sizes, all belt sanders work in the same way and that is why they are named: they are simply a band, headband or belt of abrasive material (sandpaper) that rotates continuously on two rollers to level surfaces by removing large amounts of material in a short time. The materials used are hard and soft woods, plastic, metal (stainless steel, aluminum, etc.), cement, plaster, old paint, varnished surfaces and even, in some cases, glass and ceramic.

The removal rate of the material and the quality of the surface that produces a belt sander They are primarily determined by the grade and type of the sanding belt, as well as the preselected speed of the belt. The higher the speed, the more material is removed and the finer the sanded surface remains.

The sizes of the belt sanders They are established by the dimensions of the band they support. That is why, in principle, we can classify these tools into three types according to the increasing order of size:

The hand sanders they use belts that generally range from 75mm to 100mm in width, with lengths in the order of 450-600mm, depending on the model. In this group there are also very narrow belt sanders, commonly known as mini-belt sanders or narrow band. These variants include a belt typically between 9mm and 30mm wide, and are designed to sand the same materials as their larger peers, but in narrow or difficult-to-access applications. As the name implies, hand sanders are used on static surfaces such as floors, gates, furniture, etc. where the sander should approach the material.

In return, the bench sanders Y horizontal with pedestal work the other way around, that is, the workpiece is the one that is transported and approaches the static machine, so it follows that the size of these pieces should be much smaller than that which can be processed in the hand sanders. However, the quality of finish that static machines deliver is much higher. The size of the sandpaper band in these machines it is also larger, being able to vary, for example, from 102 mm x 920 mm in bench sanders about 150mm x 2200mm in the horizontal sanders and even reaching up to 1500 mm wide in calls wide belt sanders, which are powerful and expensive machines used mainly in the wood industry.

Some models of hand sanders are sold with a frame for your mounting over a work bench and other models include a pedestal to transform them into horizontals. However, all three types offer, by means of the appropriate accessories and / or mechanisms, the possibility of tilting the machine to the desired angle, from 0 to 90 degrees.

Because they are the cheapest and the most used by beginners or DIYers, we are going to delve a little more about the hand sanders, although we will also provide some details of the bench and horizontal ones.

As with many other tools, belt sanders (traditional or narrow) can be of two types, depending on their energy source:

The basic difference between the two is that pneumatic sanders They do not have a motor and, therefore, do not require electricity. However, for its operation it is necessary to have a air compressor, whose power must be in accordance with the use that is going to be given to the sander. Many workshops equipped with air compressors preferably use the pneumatic belt sanders due to its lower cost and weight, as well as greater safety for the worker, since they do not have components and electrical cables, which can be dangerous.

Although the design and layout vary by manufacturer, the hand sanders traditional have the following main components: 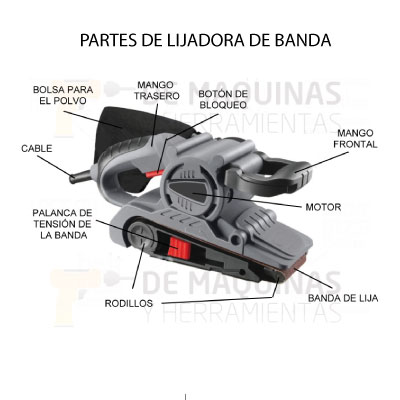 Many manual belt sanders incorporate a speed control. The operating speed of these tools varies by model, but is between approximately 150 and 500 meters per minute. The speed adjustment is made depending on the application by means of the control usually located on the rear handle. Low speeds are indicated for light sanding of fine belts, while higher speeds provide a more aggressive sanding using rougher belts. The low speed also prevents excessive wear and overheating when removing paint with the tool.

The rollers of these tools allow the belt rotation at the speed determined by the user. In older designs, both rollers were the same diameter, but in most newer models the diameter of the front roller it is smaller to allow horizontal sanding closer to a vertical face.

The belt tension It is adjusted between the two rollers by means of a lever, which is also used to allow the belt to be changed. It is important that the band is perfectly aligned to your seat (platen or sanding shoe), which is achieved by adjustment / alignment button generally located on the opposite side of the tension lever. The role of band adjustment button is to move the front roller laterally, so that during operation at no time does the belt come into contact with the carcass, producing the consequent deterioration of both the belt and the sander, depending on the high belt rotation speed. Some newer sanders incorporate an electronic adjustment device, which relieves us of this task.

The platen where the band sits is a smooth polished steel base, covered by a thin pad of cork or graphite. These pads are also subject to wear and tear, as the sandpaper rotates on them, but the frequency of replacement is highly dependent on the circumstances of use.

Another essential component of belt sanders (of any kind) is the dust extraction port produced during operation. This port connects to a dust bag or cartridge (usually supplied with hand sanders) or a vacuum cleaner / dust extraction unit.

As we already indicated, some models of manual belt sanders They include, either with the machine or as an optional accessory, a component that transforms them into stationary tools. It’s about a mounting frame that fits the Case of the sander and attached to a work bench through clamps. It is a very useful accessory that should be purchased if we are going to choose one portable sander, since it will allow us to use the machine in different positions as indicated in the figures below, multiplying its potential use and increasing its value and versatility. Also, using an accessory like this is the only safe way to operate a manual belt sander as a bench sander. 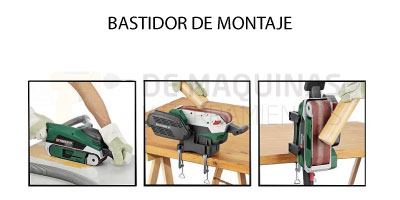 The manual belt sanders They are ideal for removing paint from surfaces, stains on wood and renovating old furniture. They can also be used to smooth the corners of furniture for rounded edges. However, they tend to leave marks and scratches, so it is advisable to finish the finishing work with other types of tools, such as orbital sanders.

In addition to those already mentioned mini-belt sanders also belong to this manual category the belt sanders for pipes, with a slightly different design, but effective for its function, as we can see in the following video.

For those users who have more physical space and want a better finish on their material, the bench sanders are indicated. These tools generally have, in addition to the band, a sanding disc which is ideal for curved surfaces and, since they do not move like portable sanders, they come equipped with a small work table or desk to support the material to be sanded with the disc. The following figure outlines a bench sander typical with its main parts. 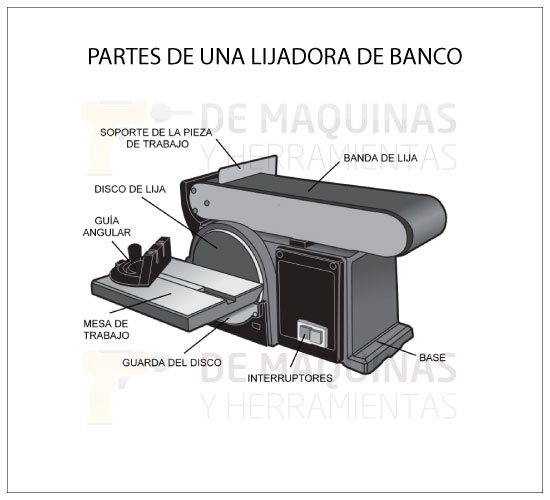 Parts of a bench sander

For professional and industrial jobs, horizontal sanders are the indicated ones, both for metal and wood. They have great capacity for deburring the edges and cleaning the weld beads. The figure shows a schematic stationary belt sander typical and its parts. 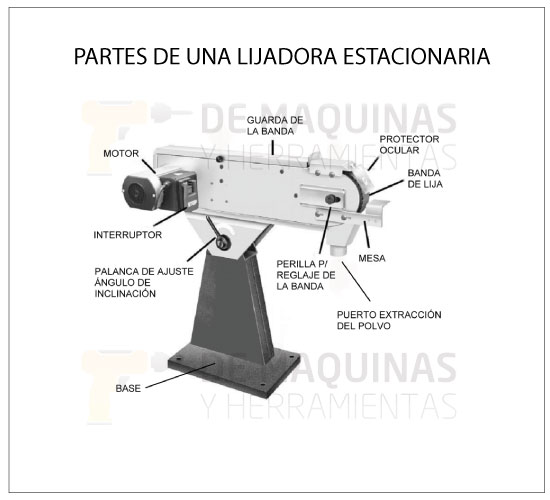 Within this type the oscillating belt sanders, which have many advantages, as the oscillation allows a scratch-free finish and reduces heating of the sandpaper band. A band of sandpaper of about 150 x 2200 mmm is used, being able to work horizontally and vertically, or at any angle between the two. The sanding table It is cast and can be scrolled up or down to use the full width of the sandpaper. The following video shows the operation of a oscillating belt sander with a wooden slat.

Since all these sanders have in common the sandpaper band, choosing the right belt is an extremely important step, in which we must take into account not only the material to be sanded but also the type of tool that we have or that we are going to acquire. There are a lot of sandpaper bands available in the market, built with various raw materials, and the offer of belt sanders it is extremely broad. Making the correct selection is key to obtaining the best results, but we will deal with these topics in future articles.

Introduction to pipe or tube wrenches

Water pumps. How to choose it based on the work to be done?