How to choose a laser receiver according to the work to be done?

The help provided by laser levels not only for the professional of the construction, but also for the worker and the home user it is extremely valuable. Traditional tools such as the meter, tape measure, spirit level and plumb line are lagging behind as laser levels take over the market and gain more and more followers.

In the articles we offer at On Machines and Tools we have already covered in detail line lasers and rotary laser levels that project red lines, as well as those that project green lines.

Thus, we have learned that, for example, when we use a laser level In areas where distance or lighting conditions are not favorable, the uptake of the laser beam is impeded. Typical situations in which this occurs are when we measure in large areas (for example, an institutional building, an airport or a commercial hall) and / or in direct sunlight.

In those cases, the solution is to use a small accessory that we have already described in time: a receiver. or laser beam detector. These devices are built to withstand harsh environments, which means that they are highly versatile and also provide high precision so that the user can rely on them.

The question that arises then is, how do we choose a laser receiver that specifically meets our needs?

To answer this question, we must be very clear that the first thing the seller is going to ask us when we go to our trusted business to acquire a laser receiver is what type of laser level will we use it with. A laser receiver By itself it is not useful, in the same way that a conventional printer will be an ornament in our home or office if we do not have a computer or a computer network to connect it.

This means that we must first obtain the laser level and then, if necessary, acquire the laser receiver. Just as a computer can work perfectly without a connected printer, the laser level can also do without the laser receiver. However, the opposite is not true, since a single printer or a printer will be of no use to us. receiver only. But, just as surely sooner or later we will need a printer for our computer, we will also need a receiver with our laser level, simply because our work demands it.

Attributes to look for in a laser receiver

Regardless of the laser level we have, the laser receivers they offer a number of characteristics of their own that are important to consider.

Compatibility: as we have been expressing, the laser receivers They are specific for the wavelength of light they can detect: red, green, and in a few cases, infrared. While some manufacturers offer universal receivers, it is primordial make sure that the receiver that we are going to acquire is compatible with our laser level. Otherwise, we will waste our money.

Accuracy: it is common for laser receivers incorporate at least two levels to measure the detection accuracy of the laser beam: one ‘normal’ and one ‘fine’. However, some manufacturers incorporate up to 7 levels, from approximate to very exact, which better suit the needs of the user, but which, as you might imagine, increase the cost of the device.

Screen type: all the laser receivers They offer an LCD screen where you can view the bright LED indicators. This screen, usually backlit, can be on the front of the device only, or also on the back. The dual display function, as shown in the figure below, allows the results to be read from both sides of the receiver, which is a practical feature when, for example, we are located behind the device.

Detection range: One of the most important factors to consider when buying a receiver is its detection range of the laser beam, which will be associated with the range that the receiver has. laser level with which we will use the receiver. That is, the more powerful the laser levelThe better we will get with a laser receiver that has the greatest possible detection range, being able to reach, in some compatible models for rotating levels, up to 200 meters and more.

Build quality: Some laser receivers They are much more resistant than others, so we must pay attention to the material with which they are built, since in our work environment these devices will undoubtedly be exposed to falls and subject to the action of water, mud or cement. Generally, receivers from trusted brands feature a robust rubberized plastic housing that offers protection against dust and weather conditions, as well as long life under heavy use.

Mounting systems: for accurate and stable measurements, laser receivers They include different types of mounting systems. Magnets or magnet strips built into the housing hold the receiver securely to metal surfaces for ease of use over long distances and ceiling applications, for example for suspended ceiling installation. On the other hand, many come with a heavy duty clamp (see figures below) for mounting on staffs, which will be of great benefit if we are going to use the receiver outdoors. 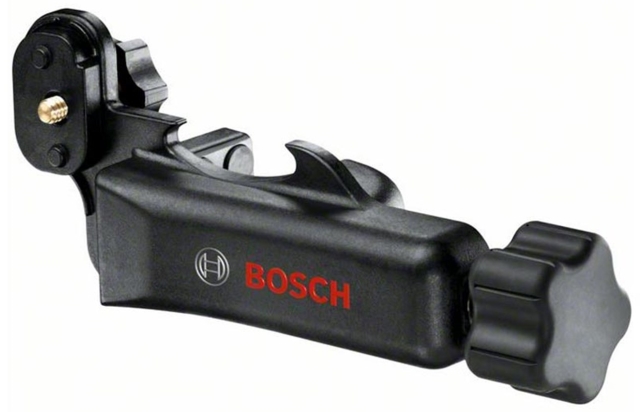 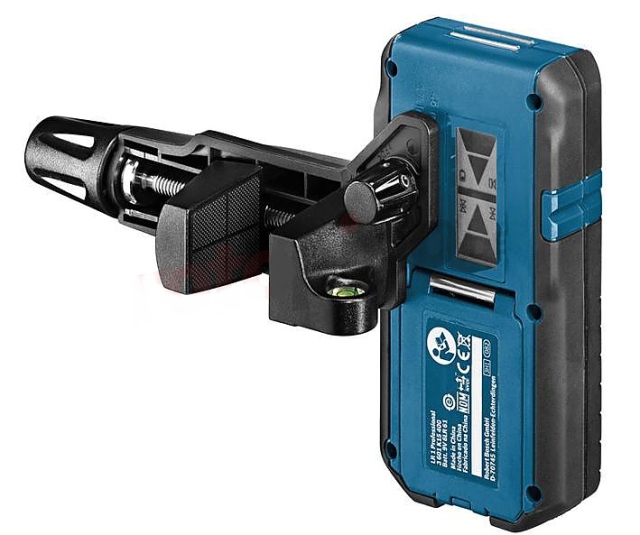 Autonomy: depending on the manufacturer, laser receivers They are powered by AA batteries or a 9V battery, and the life of these varies by makes and models. It is convenient that, before a high frequency of use, we choose the receiver that grants the greatest possible autonomy, in order to forget about changing batteries for a while.

Once we have examined the most relevant characteristics that a laser receiver, Let’s see how to select it correctly.

Since distance and direct sunlight are decisive factors in purchasing a laser receiver, in a first approximation let us imagine then the two key situations in which we could use our laser level. The following figure gives us an idea of ​​some applications of laser levels both indoors and outdoors.

Although not all is said regarding the recommendation of a specific type of level, it is generally accepted that indoors and for distances up to 50 meters, line laser levels are more suitable, While for distances greater than 60 meters rotary laser levels are preferred, which also offer excellent performance outdoors.

Therefore, depending on our usual work, we can already orient ourselves a priori about laser level that can be better suited to such work. For example, professionals in the constructionAs engineers, architects, surveyors, surveyors, land surveyors, excavators, etc., they are generally the ones doing outdoor tasks, so they are good candidates for the use of a rotary laser level. For their part, the most likely candidates for a laser level of lines are those that carry out their activities mainly indoors, such as electricians, plumbers, gas operators, carpenters, HVAC technicians, drywall installers, carpet and siding installers, etc.

Taking into account that the vast majority of laser receivers They work with a mechanism that differs according to the type of laser projected from the level and within a limited range of wavelengths, we must distinguish several possibilities of choosing a laser receiver.

In this framework and as we stated above, a rotating laser level is the most recommended device. Regarding the wavelength, the red or green laser beams do not present great differences when viewing them outdoors, so the choice of a rotary laser level A red color or a green color will be largely left to our preference and budget, since green diodes are somewhat more expensive.

Once again, all outdoor activities indicate the convenience of working with a rotary laser level. However, in this case, since we will also use the rotary laser level For indoor tasks, then it is preferable to purchase a green laser level, which will provide a much sharper and clearly visible beam without using a receiver, even in unfavorable lighting conditions, such as bright environments. If we had to work over long distances, such as a supermarket salon, for example, we would have to purchase a laser receiver compatible with rotary green laser levels.

The following figure summarizes everything discussed in this article, where the most appropriate option is highlighted in red. 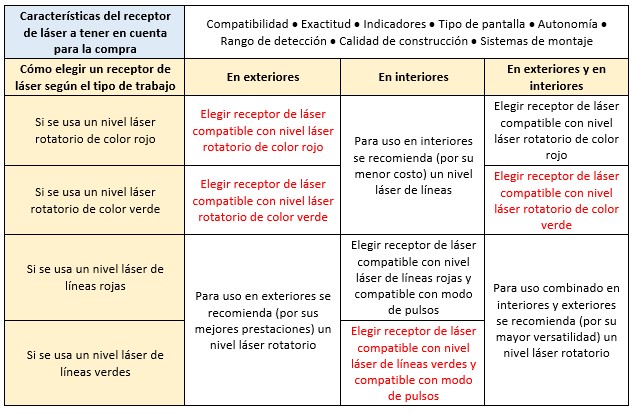 As a final recommendation for all the cases that we have just pointed out, it is very convenient, in order to avoid any type of incompatibility, acquire the receiver of the same brand as our laser level. This will always be possible if we entrust our choice to manufacturers recognized in the market for their quality and after-sales service.

How does the Belt Sander work?

How to use anti-filling sandpaper for wood correctly?