How to choose a Rotary Laser Level? 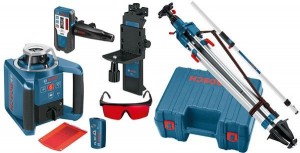 Although until a while ago its use was sporadic, mainly in the erection of suspended ceilings, nowadays the rotary laser levels They are widely used in the construction industry. Improved technology put at the service of engineers, architects, designers, contractors and workers has made possible the increasing use of this measurement tool, which facilitates work with an excellent margin of precision. In addition to the installation of suspended ceilings, some of the current applications of the rotary laser level They encompass ground leveling, foundation excavation, concrete or slab pouring operations, fencing and trim installation of all kinds, underground pruning and maintenance work, slope determination, and many others.

To know what we should consider when choosing a rotary laser level, we first have to understand how it works. As we can see in the figure below, these devices are slightly larger than the levels used in construction, since their size is closer to that of the topographic levels and generally, although not necessarily, they are mounted on tripods or wall supports.

Parts of a Rotating Laser Level

The level head is equipped with a laser diode that emits a point, which rotates at a speed that, depending on the model, can vary between 150 and 600 rpm, thanks to the impulse of an electric motor powered by batteries. This rotation of the laser spot allows the human eye to be able to view a continuous 360º horizontal line, or horizontal plane, around the entire perimeter of a room. Also, the laser can be tilted sideways, so it also projects a vertical plane between a ceiling and a floor. The more complex models even allow the manual inclination of the laser beam to a certain angle; in this case, we obtain an oblique plane.

All rotating lasers must be level before starting operation, and this leveling can be done manually or automatically. Most of these devices work very well indoors, but if you want to work outdoors they require the use of accessories, such as a laser detector or receiver, as we will see later.

The market has a wide variety of rotating laser levels that offer varying degrees of precision and many useful features; It also markets a number of accessories that will improve the efficiency and performance of these useful tools.

In addition to the characteristics of durability, autonomy and ease of use that we describe in time to choose a laser distance meter, let’s see what other factors we must take into account to select the rotary laser level that meets our needs.

Self-leveling or self-leveling ability: As stated above, for a rotating laser level to provide a reference level, it must be level. Older models require user intervention to level the appliance using a spirit level. However, the accuracy of this methodology depends on the spirit level itself and the user’s ability. Although there are still rotary lasers with manual leveling, the vast majority have self-leveling capacity, supplied by servo motors that automatically level the instrument within a range defined by the manufacturer (generally, between ± 5 and 8 degrees), which improves, by hence its accuracy.

Plumb beam: rotary laser levels can consist of one or two beams. The cheapest models have a single beam emitted horizontally. Models equipped with two beams add a second beam emitted from the upper part of the apparatus to be used in determining the plumb line, both in an upward and downward direction. This feature adds one more functionality to the rotary level, making it a laser plummet as well.

Shake alarm: This is an important function, because if at the time of measurement the device is accidentally bumped or experiences any type of vibration, the level or height of the laser line can change. Self-leveling units can automatically correct for changes in level (provided the self-leveling range defined by the manufacturer is not exceeded), but cannot compensate for changes in height. Therefore, a shake alarm alerts the user that the laser has been hit and may not be measuring correctly. This alarm can be a flashing light or a function that turns off the laser itself. Importantly, even self-leveling lasers turn off when they receive a large impact or sudden movement is detected in the apparatus that causes a greater difference than self-leveling ability.

Slope equalization: The more sophisticated models of rotating laser levels also provide the function of manually controlling the inclination of the laser in order to equalize a given slope, for example, that of a sloping stair, pipe or floor, etc., up to a range of approximately ± 10%. Slope equalization works with automatic disconnection of the rotary level self-leveling function and can be done in two ways, depending on the device (s): a) simple slope, that is, the laser head can be tilted in the direction of the X axis in order to apply a level to control a slope; and b) double slope, where the laser can alternatively be tilted in the X and Y axis directions to provide, for example, two different slopes in one area.

Manual entry of slopes: This feature is similar to slope matching, with the additional benefit that instead of tilting the laser to align with the existing slope (s), the user can enter the angle of the slope (s) directly on the rotary level keypad.

Laser Color: the visibility of the light beam depends on the lighting conditions. Hence, most modern rotary laser levels come with a green laser, instead of the traditional red, as it is four times more visible than red, but has a shorter range. It is generally advised to use green lasers indoors, where lighting conditions require a brighter beam. However, if you work outdoors, or both outdoors and indoors, it may be advisable to purchase a device with a red laser, although it has less brightness.

Accessories: the optimal use and exploitation of a rotary laser level depends on a series of accessories that, sometimes and according to the manufacturer, are included in the kit of the device, and other times they must be purchased separately. These accessories are mainly the following (see figure): 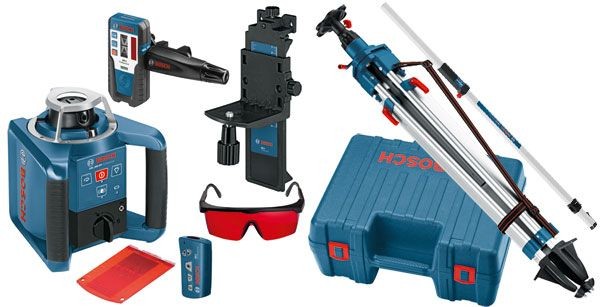 a) Laser receiver: in outdoor jobs in sunlight or indoors involving long distances (eg shopping malls, gymnasiums or indoor auditoriums, etc.) it is difficult to see the laser. That is why the use of a small laser detector or receiver is highly recommended, which quadruples the range of the rotary level. This device is mounted on staffs or graduated rulers by means of a magnet and detects the laser beam emerging from the level up to distances of between 50 and 250 meters, depending on the model. Most laser receivers are provided with both acoustic and light signals that indicate to the user the correct location of the laser, or whether, on the contrary, the receiver must move up or down to correctly locate the laser. If the rotary level is equipped with a green laser, the receiver can be dispensed with indoors; however, regardless of the color of the laser, the use of the receiver outdoors is essential.

b) Tripod: This is another essential accessory for those who work outdoors or in large and spacious environments. Manufacturers sell various types of tripods that are adapted by the corresponding thread that includes the various devices.

c) Wall or wall bracket: For indoor work, this accessory is extremely useful because it allows you to fix the rotating level to the wall during the installation of, for example, suspended ceilings, as well as when working at a height higher than that of a tripod or on unstable surfaces .

Other equally useful accessories are the remote control, which facilitates remote control of the rotary level, and the laser glasses, which filter the light from the environment, allowing you to appreciate the laser light with greater intensity.

Here is a video with a Rotating Laser Level in use:

How to use a Woodworking Planer?

What are the IP Standards?

How to weld with MIG/MAG?