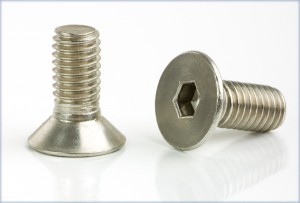 From the operator of a workshop, whether mechanical, wood or bicycle, to the DIY enthusiast who wants to assemble a piece of furniture purchased in a hypermarket, everyone has used Allen wrenches ever.

However, we know that the keys were designed to spin the multiple types of screws offered in the market. Therefore, the Allen wrenches would not exist if the wide assortment offered by modern hardware did not include screws whose head contains an axial hole, which receives the name of hollow hex head or callen head.

By virtue of their hollowness, these types of screws cannot be turned with a nut wrench common, but with a male key named precisely Allen wrench.

Apparently, the appearance of the Allen screws at the beginning of the 20th century was due to reasons of industrial safety, given the need for the pulleys and shafts of the transmission lines, commonly used in the factories of the time, to have screws of headless restraints, which would be less likely to catch workers’ clothing and thus lead to accidents.

Allen screws were first adopted by tool and die makers, and later spread to other areas involved in the manufacture of military aircraft, tanks and submarines, civil aircraft, automobiles, motorcycles, bicycles, furniture, and others.

The placement or removal of the Allen screws led to the invention of a small, light, economical manual wrench with an extremely simple design, since it consists of a hexagonal bar with an angled “L” shape, whose external measurement coincides with the distance between opposite faces of the screw to be turned. The short side of the “L” fits snugly on screws that contain a hexagon socket, and the long side serves as a lever for turning. 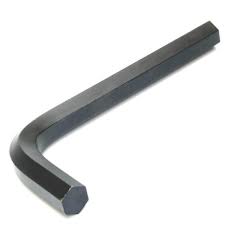 Today, the Allen wrenches they are made of galvanized steel with or without nickel-plated chrome-vanadium alloy, they are available in various sizes (both metric and imperial measurements) determined by DIN 911, ISO 2936 and ANSI B18.3.2M standards, and their dimensions between opposite faces They range from 0.9mm to 36mm. The largest sizes include keys with a total length of between 20 and 35 cm, and a weight between 1 and 5 kg.

Usually the Allen wrenches They can be purchased individually or in sets containing several pieces of various sizes, either with short arm or long. These games can be purchased at key chain, in case or cash register, or in a razor, as shown in the following figure. 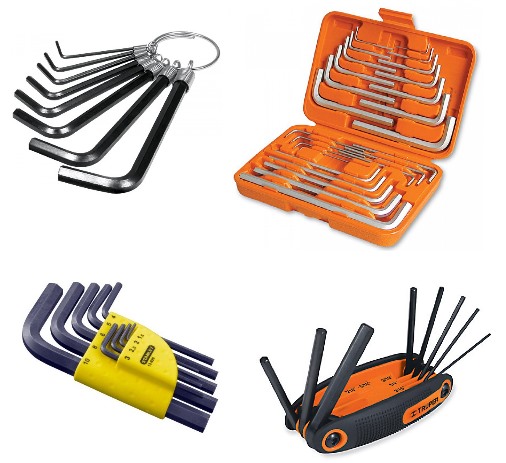 The knives feature a convenient pocket design and rubber body, which holds 7 or 8 piece sets in both metric and imperial sizes. The advantage offered by razor designs is that they allow you to have all the keys together without losing them.

Also available Allen wrenches with ergonomic “T” handle or vertical (like an ordinary screwdriver). These designs provide extremely comfortable handling, utilizing full torque. Some manufacturers incorporate a hole in the handle to hang the tool and keep order in the workplace. 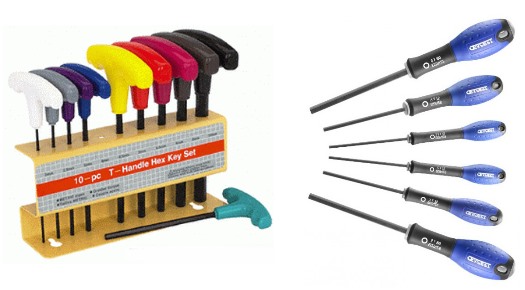 The keys that we will see next have a characteristic in common with the Allen wrenches, that is, they are designed to rotate screws whose head contains an axial hole. Therefore, we can consider them as Allen key variants, since they are manufactured with the same materials and marketed in the same forms and presentations that we have just seen.

These tools have a tip pseudo-sphere or hexagonal ball, which is simply and exactly inserted into the inner profile of the screw, allowing it to be rotated with the wrench in an off-axis position, as shown in the figure below.

This design is indicated for places that are difficult to access and, depending on its size, the key can swing up to an angle of 30º with respect to the axis.

The ball end allen keys or ball They are made of high-alloy chrome vanadium steel, which guarantees great durability and very favorable torques.

The bristol screw, created by the Bristol Wrench Company, features a ribbed structure with four or six grooves, which are not necessarily tamper-proof and are cut by a square corner broach, giving a slight undercut towards the outer corners of the key. The main advantage of this system is that almost all of the turning force is applied at right angles to the grooved face of the screw, which reduces the possibility of the screw “stripping”. For this reason Bristol keys are often used on soft non-ferrous metals. Compared to a Allen wrench and for the same torque, the bristol keys they are less prone to stripping, but they are not much stronger than a torx key.

This type of wrench is commonly used in avionics, high-end communication equipment, cameras, air brakes, and machinery for construction, agriculture, defense, and astronomy. Variants with a center pin are frequently found on video game systems such as PlayStations, Xbox consoles, and others.

They are commonly used in automobiles, automated equipment and computer components, as they are resistant to the effect cam-out (ie the screwdriver blade unintentionally slips or slides off the screw) and therefore suitable for use on the type of power tools used on production assembly lines.

By design, the torx head screws resist the effect cam-out better than Phillips head or slotted head. While Phillips heads were designed to cause the effect cam-out In order to avoid over-tightening, the torx heads They were designed to prevent it. The reason for this was the development of better torque-limiting automatic industrial screwdrivers. Instead of waiting for the tool to slip off the screw head when a torque level is reached, which can damage the driver tip, screw head and/or the work piece, the design of the torx key consistently achieves a desired torque, and manufacturers claim this design can extend tool tip life tenfold.

Unlike the Allen wrenches, the torx keys have:

Both bristol keys What torx They can also incorporate a ball at the tip for access to difficult places.

How to choose a Manual Saw or Bow Saw?

How do Heat Guns work?