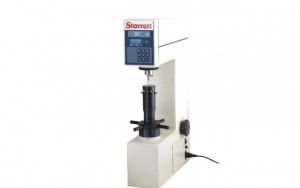 The Durometer is a measuring device to determine the hardness of a material. There are different types of durometers according to the different families of materials, with the possibility of measuring hardness of both rubber and steel. Although the word “durometer” in the Anglo-Saxon world is only used to refer to the equipment to measure Shore hardness, in Latin America it is widely used to identify all the hardness test benches that exist.

Hardness is a property of materials. Most encyclopedias define it as the resistance to permanent penetration under static or dynamic load that a material has, after carrying out several tests. In general, good hardness means that the material is resistant to scratches and wear, which is very important in the case of tooling used in manufacturing. There is a close correlation between the hardness and the strength of a material.

The first hardness tests were based on the behavior of the minerals according to their ability to scratch a softer one. For this, a scale called Mohs, whose values ​​range from 1 to 10, where 1 represents talc and 10 represents diamond.

Over the years, new quantitative hardness techniques were developed, based on a small penetrator that is forced onto a surface of the specimen of the material to be tested under controlled conditions of load and speed. The depth or size of the resulting imprint is related to a hardness number. The softer the material, the deeper and deeper the footprint, and the lower the hardness number. The hardnesses obtained have a relative and not an absolute meaning, so caution must be exercised when comparing the measurements obtained by different techniques on the same material.

Since there are different types of durometers according to the material to be indented, below is a table with the main methods and their respective application:

[table caption=»Aplicaciones de los Durómetros» width=»585″ colwidth=»100|100|100|100|100|100″ colalign=»center|center|center|center|center|center»]
Shore, Rockwell, Brinell, Vickers, Knoop, Leeb
Elastomeric polymers and rubbers., Heat treated steels., Metals and alloys such as brass, tempered and annealed steels. Nitrided iron castings. As an alternative to the Brinell method, it measures hardness in all metals including stainless steels; carbon steels; martensitic steels and others., Brittle materials; ceramics and thin sheets., Same materials as Rockwell Vickers and Brinell but the Leeb device is portable and is used for parts that cannot be brought to a test bench.
[/table]

The scale of this durometer was defined by Albert shore around 1920, although it was not the first device invented in history to measure hardness. 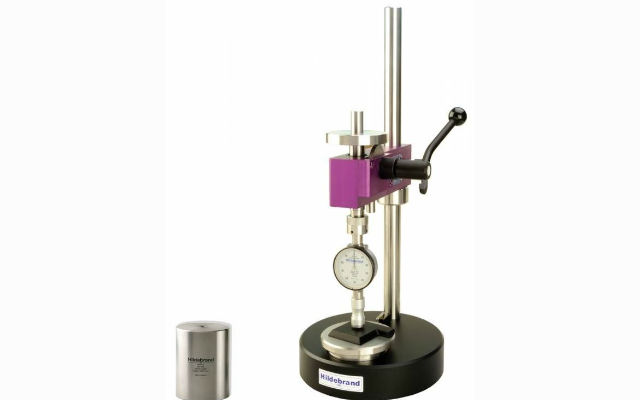 There are several defined scales according to the different properties of the materials, but for this device the most common are the A and D scales, the first for soft plastics and the D for the harder ones. In total, and according to the ASTM D2240-00 standard, there are 12 scales (A, B, C, D, DO, E, M, O, OO, OOO, OOO-S, and R), whose values ​​range from 0 to 100 indicating the hardness of the material.

The measurement method consists of generating a deep indentation or imprint in the material with a normalized force through a penetrator. The depth depends on the hardness of the material, its viscoelastic properties, the shape of the pressure penetrator and the duration of the test. When the imprint is being made on the material, the depth measurement is transmitted to an internal spring of a dial gauge, which can be analog or digital, giving a certain value of hardness.

Shore A and D hardness scale for different applications

The Differential Depth Durometer Rockwell It was invented by the brothers Hugh and Stanley Rockwell, in 1914, in the USA. They both worked at the New Departure Manufacturing Co bearing factory, which would later become a General Motors group company. The reason this device was developed was to measure the effects of heat treatment on deep groove ball bearing raceways.

The scales used with this technique are varied according to the different combinations of penetrators and loads used, being able to test any metal or alloy, both hard and soft. There are two classes of penetrators, the spherical ball hardened steel with standard diameters and the tapered diamond. The hardness measurement method involves first applying a small initial load, which increases the accuracy of the measurement, and then a higher load. Based on the magnitude of the major and minor loads, there are two types of tests: Rockwell and Shallow Rockwell. The following table specifies the loads used for both tests:

Types of penetrators and loads in Rockwell and superficial Rockwell tests

Modern equipment for the measurement of Rockwell hardness is automated and even allows the variation of the time of application of the load. However, mechanical equipment is still widely used in industry. 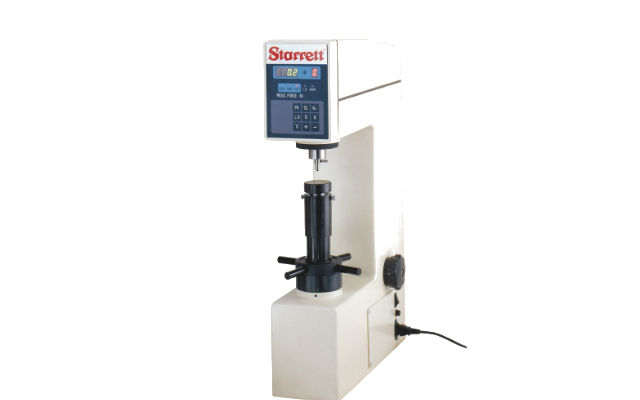 This method of hardness measurement was proposed in 1900 by the Swedish engineer Johan brinell and it was one of the first hardness tests that existed in the world.

In Brinell hardness tests, as in Rockwell tests, a hard spherical penetrator is forced on the surface of the material to be tested. The indenter is a 10mm diameter hardened steel or tungsten carbide ball. The normalized loads are defined between 500 and 3000 kg, increasing to 500 kg. During the test, the load remains constant for a time ranging from 10 to 30 seconds. The number of Brinell hardness it is denoted HB (HBW if the indenter is made of tungsten carbide) and is a function of the magnitude of the load and the diameter of the resulting footprint. This diameter is measured under a microscope and converted to a specific HB number using the following formula:

There are semi-automatic techniques to measure Brinell hardness that use an optical scanner attached to a digital camera mounted on a flexible probe. This allows the camera to be positioned over the indentation. The information from the camera is sent to a computer to analyze the imprint, define its size, and calculate the HB number. To use this technology, the finished surface of the sample must be more careful than that used in manual measurements. 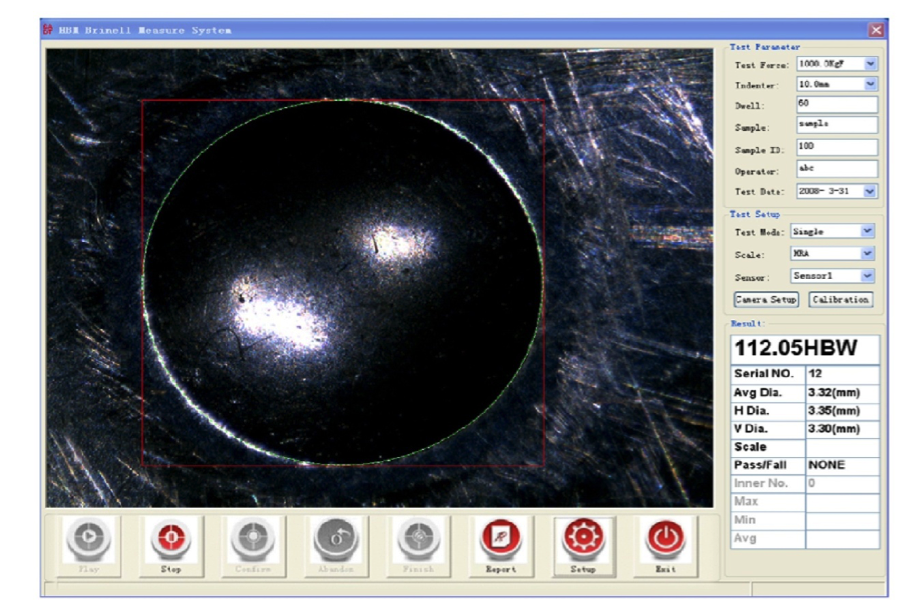 This system was developed in 1921 by Robert Smith and George Sandland at Vickers Ltd. In the Vickers trial the indenter is made up of a very small pyramidal diamond. The main principle is to observe the ability of the indented material to resist plastic deformation. The applied loads range from 1 to 1000 g, therefore this test is considered microhardness. The resulting mark is observed under the microscope and measured, this measurement is converted to a hardness number that is identified with HV (Vickers Pyramid Number) or DPH (Vickers Diamond Pyramid Number). It is necessary that the surface of the sample has been prepared by roughing and polishing.

The Vickers hardness testers The current ones consist, in addition to the automatic penetrating device, of image analyzers with a computer and their respective program. The latter controls important system functions including indentation location, gap, calculation of hardness values and graphics of the information obtained. 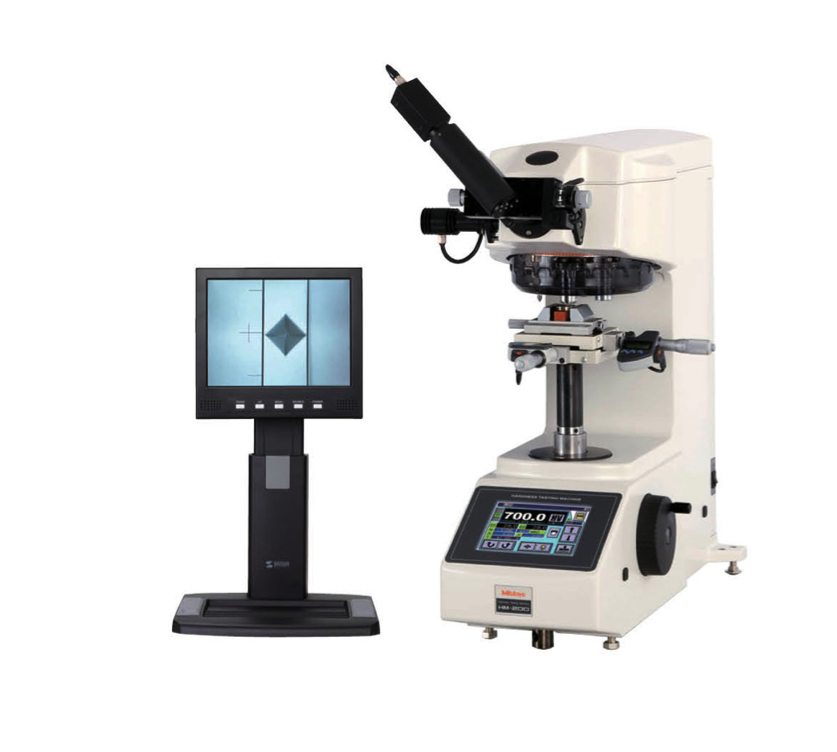 This system of hardness measurement was developed by Frederick knoop in 1939, in response to the Vickers method. Basically the indenter is also a diamond pyramid, but in a somewhat different shape. The Knoop method responds very well to brittle materials, such as ceramics.

In the Knoop durometer the resulting indentation is also measured by a microscope. Knoop hardness number is noted with HK. The advantage of this test is that only a very small sample of the material is necessary to perform it. As the sample is so small, and when testing mainly thin metal sheets, great control must be had over the load and ambient temperature as they can affect the results of the procedure. 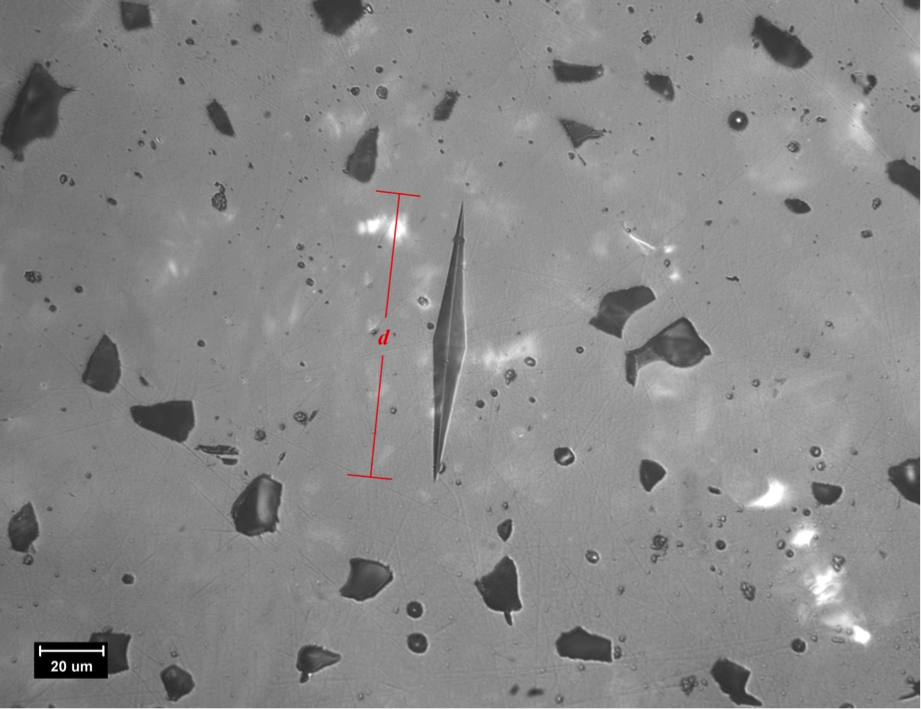 Regarding the equipment used, they are similar to those mentioned for the Vickers system.

After having seen all the previous hardness test benches, it is valid not to leave out Leeb’s portable method. Developed in 1975 by Leeb and Brandestini, it is an alternative device that can yield statistical conclusions from entire batches tested without destroying samples. 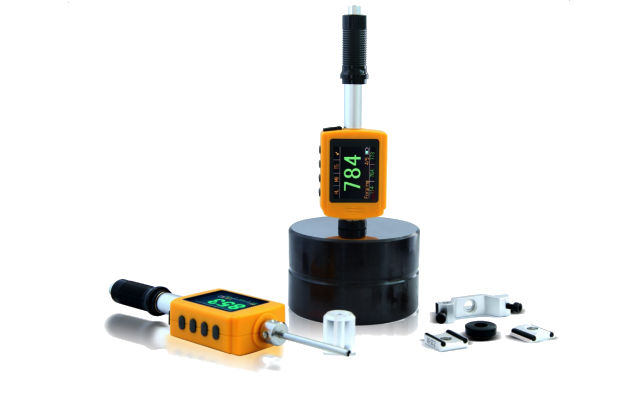 According to Leeb’s dynamic principle, the hardness value it can be derived from the loss of energy from a defined impact after striking a metal sample, similar to the principle employed by Shore.

The indentations left by this method are smaller (around 0.5mm in diameter in steel samples, compared to the 3mm that a Brinell test would produce).

Depending on the specimen and the indenter, which varies in geometry, size, weight, material and spring force, there are several impact devices (called Equotip) and hardness units: Equotip D devices with hardness number HLD, and G with HLG number. The hardness results obtained in Leeb or HL hardness can be converted to the traditional HRC, HB and HV hardness scales, in order to have a better appreciation of the tested samples.

How does the Pneumatic Riveter work?

What is an LED lamp like and how many types are there?