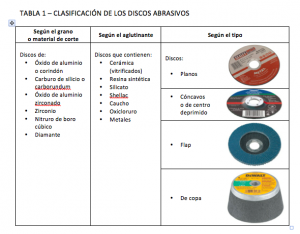 Throughout various articles in Of Machines and ToolsWe have already mentioned discs as the main tool of electric machines such as grinders, miter saws, circular saws, grinders, grinders and others.

Such is the existing variety of discs for power tools that, frequently, the perspective of its use generates confusion or leads to wrong choices by the inexperienced user. In a series of articles dedicated to these discs, we are going to delve into details to know at least the main types currently offered on the market, as well as their applications.

In this first article we will look at the characteristics and the various ways in which the discs for power tools, depending on a set of fundamental parameters when making the correct selection.

To begin with, and before providing specifications, we must make a couple of distinctions that will open the complex panorama. The hundreds of discs for power tools that we can find in specialized stores must necessarily be classified in two broad general categories which details the following graphic:

The toothless discs are commonly known as “Abrasive discs” and are constructed of abrasive grains and one layer series of elements that we will see next. They are used for all kinds of materials and are available in a wide variety of models, whose design and composition depend on the use.

The essential materials that make up an abrasive disc are three:

The following illustrative video will show us more interesting details about abrasive discs, as well as the information we find on a disc label and its meaning.

On the other hand, toothed discs They are made of steel and have, as their name indicates, a row of teeth of various shapes, with widia or diamond tip, and are used for all kinds of wood and soft materials such as metals (aluminum and bronze), plastic, plaster and laminates, among others.

Regarding the functions that meet the discs for power toolsThese are very different and cannot use the same discs, unless they are specially designed for more than one function.

The main functions of the discs for power tools there are two and we see them in the following graph:

There is also a variety of discs specially designed for other functions other than cut Y roughing, such as tool sharpening, sanding, polished, removal of welding residues, burr removal, cleaning, finish, etc. These functions use discs whose shapes, compositions and conditions of use are completely different from each other and vary according to the application.

Taking into account these two large categories that we have just seen, the diversity of subcategories that emerges from both is numerous. Let’s know what other sets of discs for power tools we can distinguish.

The abrasive discs, for example, make up a vast group that will justify a forthcoming article in Machine and Tools. For the moment, we will detail three of the parameters presented in the previous video that serve to distinguish them. 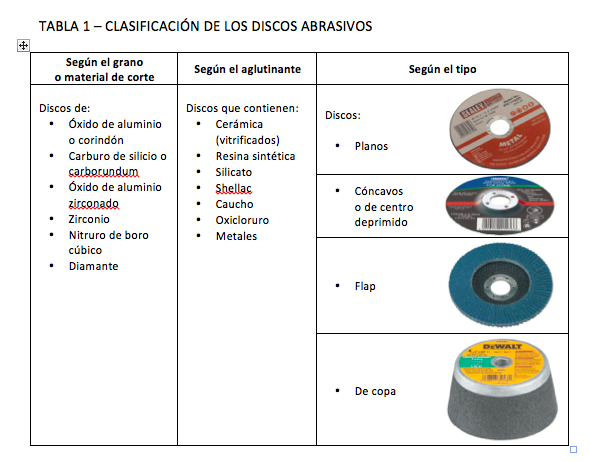 The correct combination of cutting material Y binder allow the existence of abrasive discs that cover the most demanding needs. Thus, for example, the discs of aluminum oxide with ceramic binder They are very common and inexpensive, although they have low resistance to mechanical and thermal shock. In contrast, discs containing resin they are more flexible due to the elastic nature of the binder and are therefore more resistant.

The concave or depressed center type discs are mainly used for roughing and, unlike the blueprints, used both for cut As for roughing, they have the advantage of hiding the part of the shaft and the clamping nut of the grinder so that they do not interfere with the operation that is being carried out.

The flap discs They feature a set of multiple blades of abrasive cloth, located radially and mounted on a plastic or fiberglass base, with great grinding power and a smooth surface finish.

From what we have seen so far, it is clear that the same blade cannot be used, for example, to cut aluminum or cast iron, or marble and ceramic. Each material or group of materials requires the use of a particular disc, and based on this we can make further distinctions as shown in the table below. 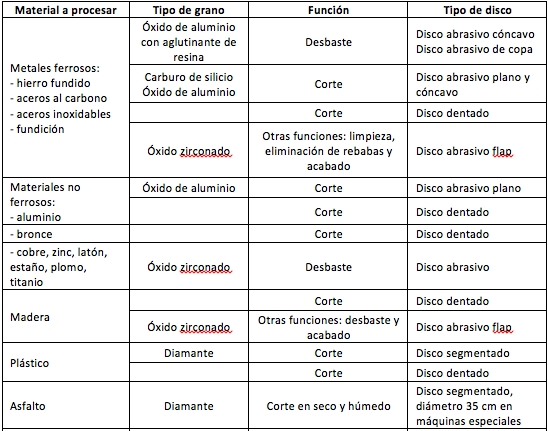 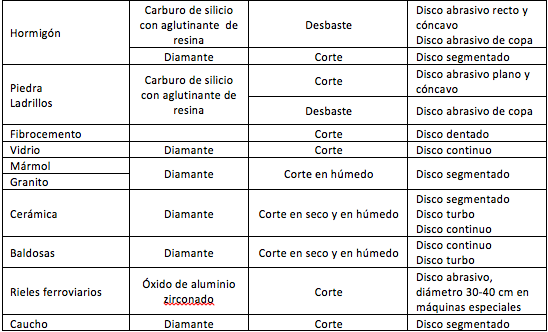 Other characteristics that establish different categories among the wheels for power tools take into account the diameter of the same, which, in turn, is related to the machine type in which they will be used.

Thus, for example, both the abrasive discs and the toothed discs to be used in both cutting and grinding operations or others, come of different types, diameters and compositions depending on their use in stationary machines or fixed, portable machines Y sensitive machines (manuals). The following table shows some examples. 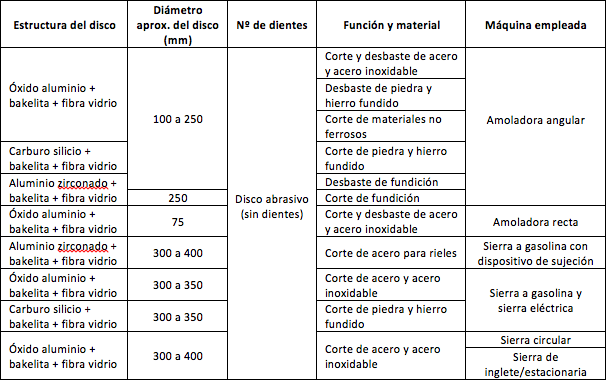 Power tool users can get the most out of their machines when they have the right information, and the same goes for accessories for those tools. Even what are apparently considered minor items, such as disks, have their own terminology, dimensions, applications, and identification systems that become critical when it comes to obtaining the best performance.

Later, in future articles, we will expand the information provided on this page with more details that will enable the correct choice of our discs for power tools.