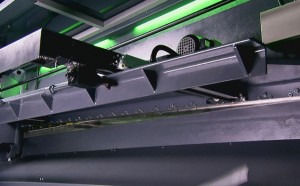 What is a Press Brake?

Throughout history, there has been an increase in man’s effort to invent and build tools that facilitate the use of available resources in the environment. It was not until the nineteenth century that society began to have the need to use industrial machinery to meet the demand for material goods. In this process a very valuable tool called press brake; that machinery designed to manipulate metal, either with heat or cold.

Also known as folding machine, is specially manufactured to mold and bend sheets, plates or metal parts. Originally, the first press brakes they worked through a system of gears driven by a crank. Later these models were replaced by those driven by transmission; that not only allow better handling of the metal, but also provide an unbeatable finish.

There are different types of press brakes; they are classified according to basic parameters, such as width, length and working height, distance to the square, tonnage or force, and distance between the frame masts.

Among them, we can mention the mechanical, pneumatic, and hydraulic presses. They all fulfill the same function; however, they are distinguished by the application of force they exert against the metal.

The press brakes They have two very important advantages: speed and precision. They use an electric motor to power a flywheel, which, adjusted to a clutch, mobilizes the crank that drives the piston up and down.

Unlike the mechanical press brakes, Pneumatics exert force on the cylinder with air pressure. This type is often used for jobs that require less tonnage or force.

For a long time, the mechanical presses They were the most widely used worldwide. However, starting in the 1950s, with the advent of new computer controlled systems, they were superseded by hydraulic presses.

the presses hydraulic press brakes They work with two synchronized cylinders located on the machine frames to move the main beam. It is recommended to use this type of presses, because they produce exact and high quality products. In addition, they consume less energy; they are safer and more reliable.

These types of presses were designed for faster manufacturing; because the time you need to operate is basically the time you spend on a ram run and material placement. For this reason, it is the ideal tool to keep production costs low.

Parts and components of press brakes

All press brake It is made up of certain basic elements, such as the tamper, the sides and the clamp. However, depending on the type of press, will be equipped with punches or dies designed to perform specific operations.

In technical terms, the press is made up of a frame that supports a pedestal and a ram or beam; that when subjected to a strong tonnage, it moves at right angles, linearly in relation to the pedestal or bench.

Its structure is composed of a work table, fasteners and the back gauge. In turn, the work table is composed of a plate and the support. The latter has three parts: coverage, coil and the base. During its operation, the press brake it is connected to the clamping plate through a joint or hinge. Inside the base the coil is placed, loaded by a cable; in this way the plate has a greater gravity and facilitates the retention of thinner plates. Electromagnetic suspension enables the press brake to handle a greater variety of materials, lengths, thicknesses and metal parts, including those with adjoining walls, more accurately and easily.

Currently there have been improvements in the rear bumper, responsible for positioning the metal parts accurately so that the curve is made in the right place. And it is that now it is possible to program the rear stop so that it moves between the curves; in this way, it is possible to repeat the process and form complex parts.

Most processes of molded and curved They can be made on any type of press brake, as long as the proper punches and dies are used.

What are the functions and applications of the press brake?

There are several advantages to using press brakes, especially hydraulic ones. And they have a great capacity for mass production. Its application is mainly focused on the metallurgy and industrial sectors. It is for this reason that they are used to manufacture objects of hardware store, toys, kitchen utensils, and even automobile and airplane parts.

Through the press brakes, different molds and parts of stainless steel, iron, aluminum, copper and a variety of different metals are shaped into plates or sheets. In addition, they allow forging all kinds of material, such as rods, flat bars, tubes, among other profiles.

Thanks to its extensive applications, versatility and ease of use, it is considered a indispensable tool within the world of metallurgy.

How to use a press brake?

The procedure depends on each manufacturer and before getting down to work it is advisable to have appropriate training.

It is very common to mention press brakes when referring to the handling and shaping of metal. However, although they are very useful, it is necessary to know how to handle them correctly to avoid accidents; Because they are designed to bend metal through enormous amounts of pressure, they can be dangerous.

First of all, the important thing is to make sure that the press brake works properly, and is not under repair. For that, it is very useful to carry out an inspection record; in this way it is known if a recent review has been carried out. Because you are machines they work with many pieces and exact amounts of pressure and liquid, it is important to verify that all the conditions are in order; otherwise, avoid using the press until future checks.

Parts must be free of dents. If for any reason they show signs of wear, it is imperative that they be evaluated, reconditioned or replaced.

Then you need to clean the machine from foreign objects before connecting to electrical power. Never attempt to tamper with the press surface when it is on.

In addition to that, use all the necessary protective equipment; plus any safety instrument that the case requires, such as glasses and gloves. In case they do not have this equipment, it is preferable that the press is not used.

Finally, operate the machine according to the usage specifications. If it is used to perform functions for which it was not designed, the press brake could be damaged; or what is worse, bring negative, dangerous and serious consequences for the operator.

In conclusion, press brakes are tools used in the metallurgy industry to mold parts and plates of any type of metal. To learn more about the use of the press brake, here is the following video.

What are they, how do they work and what is the scope of hydropneumatic or domestic systems?

Introduction to the Tap