Every workshop requires the use of hand tools to assemble and disassemble various parts held by nuts or bolts, whether motors, devices, components, equipment, etc. Among these tools, keys They are an essential element.

There is a wide variety of keys They can be grouped into two broad categories:

to) Wrenches with fixed or calibrated measure: they fit on the head of screws and on nuts to tighten or loosen (as appropriate) by means of a rotational movement. The parameter used to determine its measure is the distance between faces of the nut or bolt, as shown in the figure below.

This distance is determined by a number engraved on the key itself and expressed in millimeters or inches. This means that, for example, if the key shows the number 16, it means that the width between flats of that key is 16 mm and it should be used only with hexagonal nuts or bolts whose distance between opposite faces is 16 mm. The predetermined size keys that are most frequently used in the disassembly and assembly operations of the elements and assemblies mentioned above are: fixed keys, star keys, mixed keys, socket wrenches, socket wrenches, Allen wrenches, pipe wrenches Y cross keys.

Within the first category of keys with fixed or calibrated measure, the socket wrenches They deserve a special mention for two reasons. First of all, the socket wrenches they are hollow tools ideal for removing or mounting hex head or multi-toothed nuts or bolts that are in deep locations that other types of wrenches, such as open-end or ring wrenches, cannot access. Second, the name “pipe wrench” It comprises, in various countries and regions, tools with similar function but different appearance.

Therefore, in order to clear up confusion, in this article we are going to detail the various types of keys that, depending on the region, can be purchased commercially under the generic name “pipe wrench”, but they are not actually identical to each other.

To begin with, the tool that strictly responds to the name pipe wrench It is the one that presents a body, generally made of high quality carbon steel, which has precisely the shape of a tube with a hexagonal profile and two piercings close to the ends. These ends end in two hexagonal heads with different distance between faces.

Two methods can be used to turn this key:

A variety of socket wrenches are the calls “pipe keys”, whose only differences are two:

They are made of forged chrome-vanadium steel. Its two mouths are the same and are generally 6-sided (although they also come with 12 sides, like the one in the figure) with metric measurements ranging from 6×6 to 32×32 mm, offering two possibilities of use depending on accessibility. of the bolt or nut. The upper part of the short mouth contains a hole that allows the insertion of a type wrench. Allen or torx. The pipe wrenches They are not as common as the previous ones, although on certain occasions they are very useful.

These tools are also known as keyholes, socket wrenches, from dices or of plinth, or cup tools or hub. These are closed cylindrical keys with 6, 8 or 12 internal faces (see figure below) of variable size and height, so they have a marked number that indicates the distance measurement, either in mm or inches, between the keys. opposite faces of the nut or bolt.

At the top of the socket wrenches there’s a square hole on which fits a drive element What can be: rattle or ratchet, articulated and movable handle, brace, extension or extension cord, joint Y reducer coupling. Square hole measurements are in inches, per ISO 1174, and are 1/4, 3/8, 1/2, 3/4 and 1 inch.

The socket wrenches They also have different standardized profiles (slotted, Phillips, Torx, XZN, etc.) that are inserted inside the screw heads.

Usually the socket wrenches They are manufactured in two different qualities:

The socket wrenches They are very useful in the application on screws that are difficult to access. Normally, these keys are sold in sets in cases or briefcases that include the set of keys themselves, actuating element(s) and a series of adapters, as shown in the following figure. 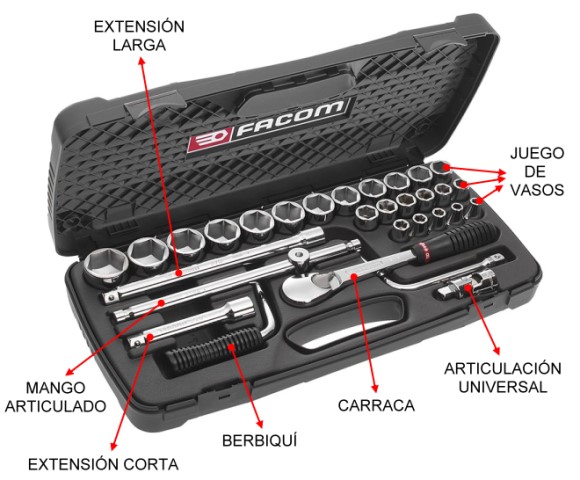 within the socket wrenches There are other simpler designs that do not require an actuating element, but only the strength of the hand. These simple socket wrenches are widely used in all types of vehicles, typical examples of which are spark plug wrenches and the cross keys or of cross-piece for tightening or loosening car wheel bolts. The basic types of these keys are: 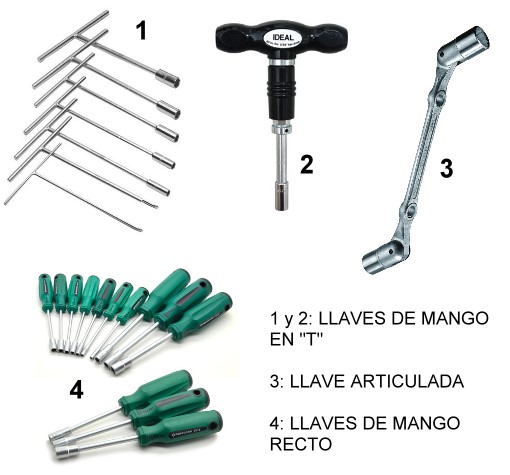 They are made up of a glass Key attached by the body to a handle similar to that of a screwdriver. They are used in quick interventions on screws or nuts where it is not necessary to apply a high torque. They are of variable lengths, measures between 7 and 19 mm, and are made of heat-treated chrome-vanadium.

When a little more force is required, the straight handle wrenches come in the “T” wrench variant, that is, socket wrenches whose measurements vary between 6 and 19 mm and with an ergonomic “T” handle or grip. The rod is made of special high-alloy matt chrome-plated steel, with the measurement acid-etched.

They have two different size sockets that are hinged to the body of the tool at the ends and are flexible at a 30 degree working angle. They are made of chrome-vanadium steel and have measurements ranging from 6 to 24 mm.

In future articles we will see other types of keys that are also very useful in any workshop, as well as in DIY applications.

What is a Laser Shaft Aligner?

Plumbers: How to avoid accidents?