Introduction to the Graduated Ruler 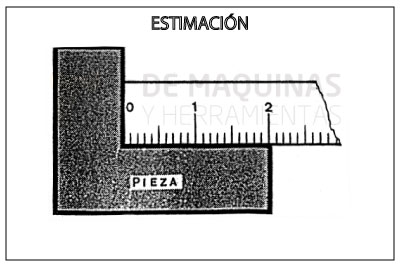 A rule is essentially a thin bar used to draw straight lines, usually containing calibrated lines through which you can measure a length. For measure a length It is understood to determine the distance in a straight line between two faces, two generatrices or two edges of a piece, or between lines or points marked on the piece, in which case the instrument used for such measurements is called ruler. The applications of the ruler range from geometry to technical drawing, printing, construction, mechanics, carpentry, engineering and architecture.

Like many other tools that still stand out under intensive use today, the rules They come from very ancient times, some of which were already marked in decimal subdivisions with astonishing precision. They were built first in ivory, later in wood, and rulers are now available in a variety of materials, such as wood, steel, glass, or plastic, depending on the application and the precision required.

The graduated rulers respond to DIN standards, They can be graduated in both the metric system and the English-imperial system (or both) and there are several types. Listing them in increasing order of precision we can mention the following types:

Are the graduated rulers most common and are used for three main purposes: to measure, to aid in drawing straight lines, and as a guide for straight cutting with a blade. Generally, they are made of plastic or wood, they are 20 to 100 cm long (the latter being the typical commercial “meter”) and they are graduated in millimeters and, in some cases, half millimeters.

The first folding rule It dates from 1851, when it was invented by the German Anton Ullrich. The current ones, used mainly in carpentry, blacksmithing and other construction activities, are subject to the standard DIN 6400. They are generally made of wood (although there are also metal, nylon and fiberglass) and have reinforced steel or aluminum edges. They are 1 or 2 meters long and the graduation can be engraved, printed, stamped or laminated. They are not very exact, since they admit a tolerance from 1 to 2 mm in 1000 mm length.

The great advantage of measuring tapes is that they can not only roll, but also measure lines and curved surfaces because they are flexible. They respond to the norm DIN 6403 and are presented with or without a protective casing. Those without a casing are typically the so-called sewing tapes, used in both haute couture and tailoring. They are made of rubber, fabric or plastic and their standard length is 1.50 m.

The measuring tapes with casing (sometimes referred to as surveyor tapes) present greater accuracy and are subdivided into two types, depending on their length. Those of the first type, also called flexible meters, are made of ribbed stainless steel and are between 1 and 2 m long. Their casing is metallic or plastic and they are graduated in centimeters and millimeters, and sometimes also in inches and fractions of an inch. The tolerance of these tapes ranges from 0.1mm in 1000mm to 0.15mm in 2000mm length.

The measuring tapes of the second type they are much longer, 10, 20, 30 and 50 meters. They are made of flat stainless steel, the housing can be made of plastic, metal or leather and the tolerance is similar to the first type. The end of both types has a hook to facilitate the coincidence of the zero with the edges of the pieces.

The folding meters and the measuring tapes They are suitable for rough measurements due to their high tolerance.

They respond to the norm DIN 6401 and they are rigid prisms of tempered steel and rectangular section (some are beveled) in which lines or divisions in millimeters or half millimeters are engraved on the edge of one face and, sometimes, in inches and fractions of an inch on the other edge. They have a length between 300 mm (tolerance of 0.065 mm) and 500 mm (tolerance of 0.075 mm) and a thickness of 0.3 mm.

Other models are made of rolled steel and can be 0.5 meters (0.075mm tolerance), 1 meter (0.1mm tolerance) and 2 meters in length, with engraved or scratched graduation. The most common application of metal rulers is in simple shop measurements.

Both in the folding meters as in the measuring tapes and the metal rulers the extreme edge coincides precisely with the first graduation, in order to be able to be used in places where the reference line is not fully accessible.

They are of two classes, I and II, which meet the DIN 866 standard. class I, the zero stroke starts about 10 mm from the edge, while for those at the class II the zero stroke coincides with the edge or front face of the ruler. Both classes are made of unhardened steel and are between 500 and 5000 mm long (the latter are foldable). The graduation can be scratched or engraved and those of class I are the most precise, admitting tolerances of 0.04 mm in lengths of 1000 mm against 0.1 mm that admit those of class II for the same length.

Normalized according to DIN 864They are made of tempered steel and also made of other materials. Its maximum length is 1000 mm and the section can be in the shape of “X”, “U” or “H”. The precision of these instruments reaches a tolerance of 0.0055 mm in the length of 100 mm.

Both workshop rules, as the check and those of comparison, are used, depending on the precision required, in metrology workshops or are mounted on machine tools.

The pattern rules They are not standardized by DIN, but their construction is similar to the rules of comparison and they have even better precision, since with their tolerance of 0.0022 mm per 100 mm of length they satisfy the most stringent requirements. They are used, fundamentally, in the centralized control of the graduated rulers, especially in that of comparison rules.

How to use a graduated ruler

For simple measurements with graduated rulers for commercial use, the visual to the object to be measured on the division of lines. However, some important factors must be taken into account to obtain correct measurements.

a) Appreciation: is known as appreciation to the smallest measure that can be read on a measuring instrument. For example, if a ruler is graduated in millimeters, the assessment will be 1 mm. If we need high precision in the measurement, an appreciation of 1 mm may be insufficient.

b) Estimation: If the measurement of an object does not coincide with the appreciation of the measuring instrument, then we must estimate reading, that is, getting a rough reading.

For example, if we measure the part in figure 1 with a desk ruler or with a meter graduated in millimeters, we see that the measured length is greater than 20 millimeters and less than 21 millimeters. Therefore, if we conclude that the measurement is 20.5 mm we will have made a estimate 0.5 mm, which can be wrong if we require great precision.

c) Parallax: when directing the visual to the object to be measured we must do it exactly perpendicular to the ruler, as indicated in the following figure: 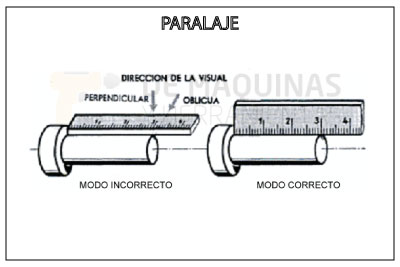 Otherwise, we would be introducing what is known as a parallax error, which occurs due to the incorrect position of the operator with respect to the graduated scale of the measuring instrument, which is in a different plane. This error is also reduced by using rulers with the graduated edge beveled.

Learn How to use a Graduated Ruler? in the technical article below

What to consider when choosing a cordless brush cutter?

How to maintain a vacuum cleaner?