Introduction to the Router or Tupí 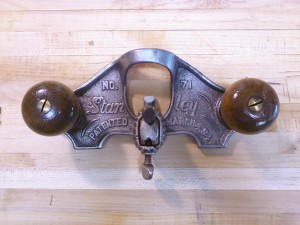 The router router or router is a electrical tool used to mill or drill a specific area of ​​hard parts such as wood or plastic. Widely used in carpentry, this hand tool gets its name from two different countries, as well as their meanings. Router comes from English, which means “router” and tupí comes from French “toupie” which means “top”, but refers to a machine tool composed of a table with a rotary system with a milling cutter to make profiles in the wood. Over time, probably due to a fusion of terms, in the Spanish-speaking world this tool was called milling machine as “router-spindle moulder”, although there are some Latin American countries that only call it “tupí”.

History of Routers or Tupí

Beyond its etymological origin, before electric routers existed, there was a handheld version that was used to make patterns and wooden stairs. Today it is still used for very specific carpentry jobs.

The first devices used on a rotational basis were powered by the pedaling of humans. The first foot-powered milling machine was manufactured by WF & John Barnes Co., Illinois, USA, in 1872. Machines of this type continued to be used throughout the century, into the 1930s, primarily in rural areas where electricity was not yet available. 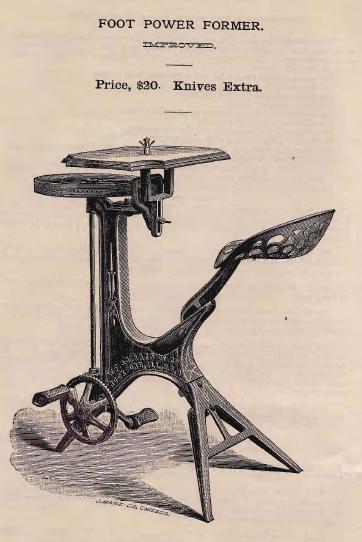 The device called the Barnes Foot Power Former was used to make decorative edging on supports, scrolls and panels of irregular and regular wooden molds, reaching 7/8 inches deep. Depending on the skill, strength and endurance of the operator, it could reach speeds of 2,000 to 2,500 rpm. The advantage of this device compared to current routers Driven by electric motors, the tool’s direction of rotation could be changed according to the pedaling direction, obtaining better surface finishes on the wood more quickly and precisely.
There is still discussion of who invented the first electric router portable, whether it was RL Carter or the Kelley Electric Machine Co. The truth is that there is evidence that it was the latter, in 1905, who presented the Kelley portable router. 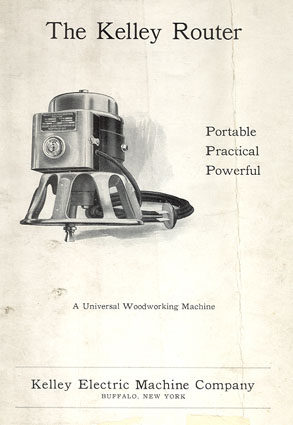 Then would come the Carter router, widely sold during the period of the First World War (1914-1918), which already incorporated a variety of equipment in terms of power and weight. It is called “Wonder Tool” (Wonderful Tool), it was smaller than Kelley’s but higher power, with 1 ½ HP. 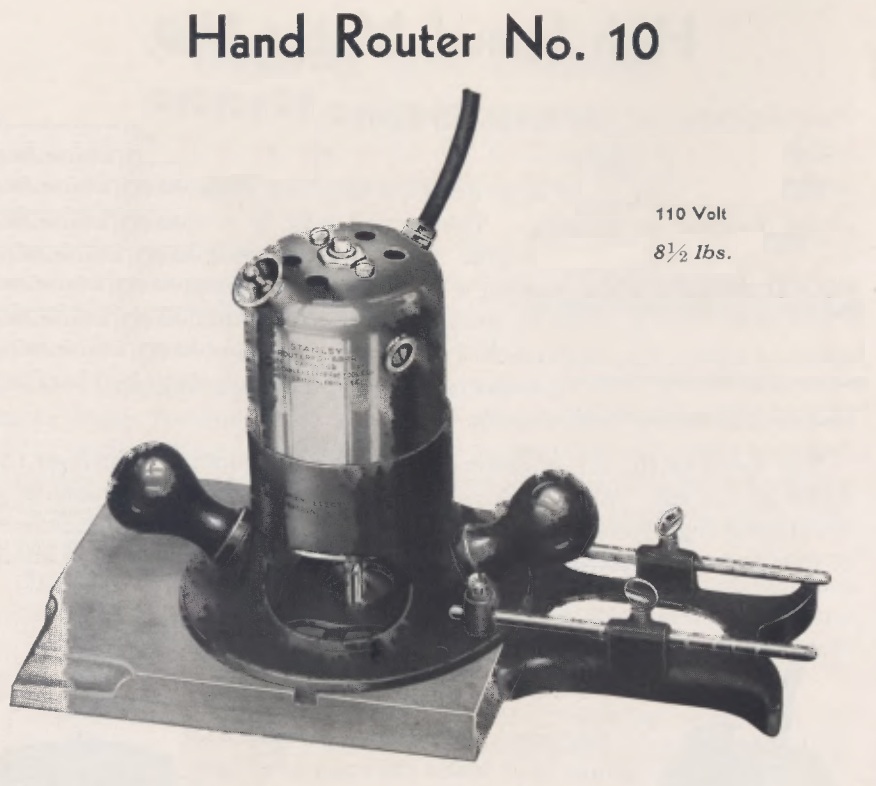 In 1929 the Stanley Electric Tools purchased Carter’s line of routers and continued to manufacture them until the early 1980s, when the company was bought by Bosch Power Tool Corporation.
Despite the fact that in the aforementioned years the electrical routers They were booming, in 1915 Oscar and Rudy Onsrud invented a milling machine to work the wood that worked with the principle of an air turbine, becoming popular later with the name of “Onsruter”. The device worked with compressed air and a modified cutter at one end of a spindle, reaching 30,000 rpm of rotation. Unlike a conventional bench mill that worked at no more than 3,000 rpm at the time, this device did not burn the wood and allowed different types of grooves and bevels to be generated. In 1946 the Onsrud model was adapted and the Unit Electric Tool Co. did it, a company that 2 years later was bought by Porter-Cable. This company adapted the Onsrud model and turned it into fixed-base routers to compete with the group of routers from Stanley. 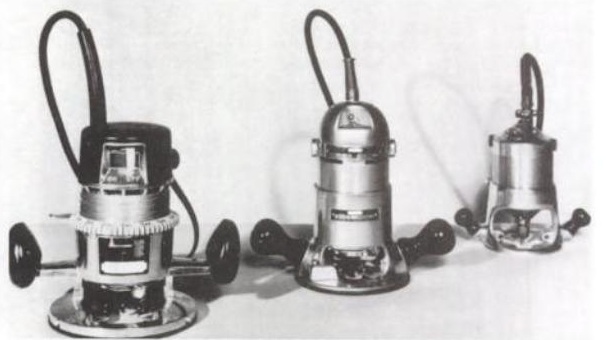 While the fixed base routers They were widely developed in the US, in 1949 the German company Elu introduced the first immersion or variable depth routers to the market. Elu was acquired by Black & decker who today is in charge of selling this variant of routers. These milling machines incorporated the idea of ​​variable speed, a necessary characteristic to work with different types of cutters, woods and cuts. 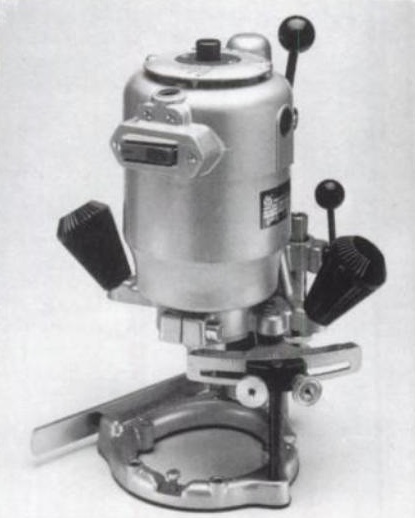 Types of routers or router today

Through the development of these hand milling machines throughout history, two types of routers in the world: fixed base and immersion.

The fixed base routers They are the most standard on the market and have bases that are attached directly to a removable motor, making this tool an integral unit. 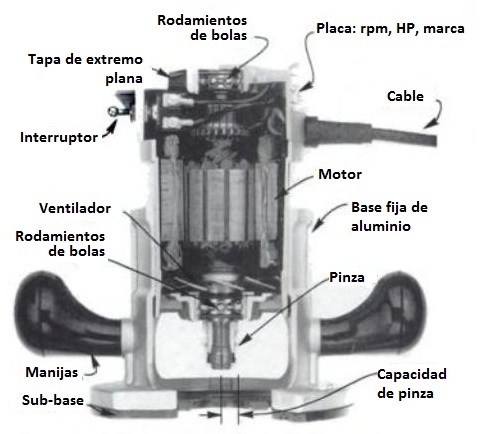 Cutting a Fixed Base Router

The dip routers They have the motors attached to bases with preloaded springs. The springs are located vertically and diametrically opposite to the body of the machine, facilitating independent movement of the motor without the operator having to lower or raise the router base from the workpiece. 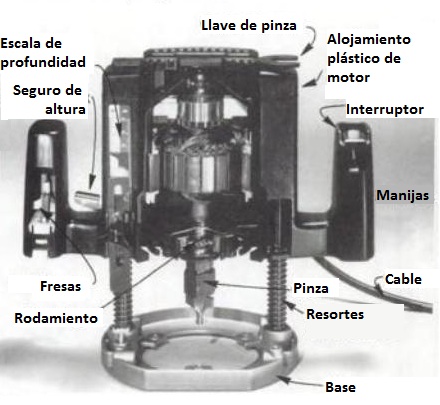 Burs, also called bits, come in a variety of profiles. Which are the most common is difficult to define since today there is the possibility of doing any type of woodwork, just have a few bills in your pocket. They will then be presented the most common strawberries and used in wood routers.

A) Straight profile: the drills that generate this profile make deep straight cuts in the shape of a circular or rectangular groove. They come in different diameters and lengths.

B) Lowered profile for assembly: guided by a pilot ball bearing at the end, this cutter is used to make recesses of a certain depth on the edges of the part, generally in order to join it to a part with the same recess later. The diameters are varied.

C) Edge flush trim profile: generated by a cutter trimming an edge flush, also guided by a pilot ball bearing that has the same diameter as the cutting blade.

D) Chamfer profile: the cutter cuts a bevel at a certain angle, usually to be part of decoration pieces.

Regarding the stem of the routers strawberries, they are between ¼ and ½ of an inch. Today there are many routers that come with clamps for these two diameters. However, if possible, it is recommended to use ½-inch burs as they provide greater stability and less vibration when cutting, generating smooth surfaces without reliefs.
The material of the burs can be of high speed steel (HSS) or carbides of different alloys. A good carbide is synonymous with long life for the cutter, even if its price is high.

Disc cutters How to choose the most suitable according to use?

What is No Dig technology and what does it mean for the industry?