Introduction to the Topography Level 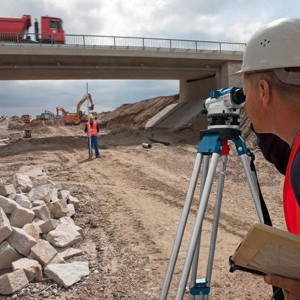 Determining the height difference between two points of a terrain is one of the most used topographic measurements. This determination is called leveling And it can be done in a number of ways. One of them is the direct leveling or topographical which, as its name implies, makes the direct measurement of the vertical distances between two points of interest through the use of a Topographic level or equialtmeter and a field rule named stadal, stay or topographic look.

To understand the basic principle of direct leveling, we can compare it with the situation shown in the following image:

The spheres “A” and “B” are on the floor (which is taken as a reference) and we want to know what difference in height exists between the two spheres. Assuming we can “suspend” a Bubble level At the height of the observer’s eye, for example, 1.60 m, and if we extend the plane of the level horizontally on both sides, this plane would pass through a ruler located above each sphere. Suppose we measure these distances and they are 0.75 m for sphere “A” and 1.10 m for sphere “B”. Then, subtracting one from the other, we would have the difference in height between the two spheres, that is: 1.10 – 0.75 m = 0.35 m.

Now we transfer this simple example to a real field situation, such as the one outlined in the following figure, where the Bubble level is replaced by a Topographic level mounted on a tripod and the measurement rules are replaced by state. 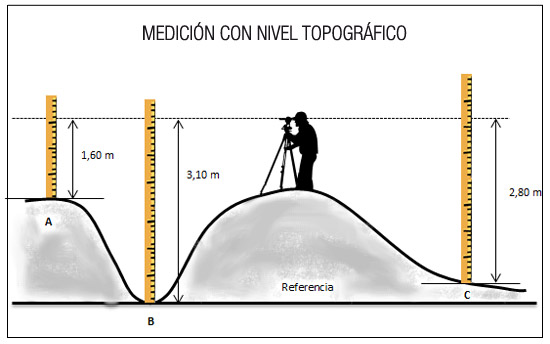 From the foregoing it follows that in order to carry out accurate readings must be guaranteed perfect horizontality of the collimation line. The way in which the different levels available in the market achieve this horizontality gives rise to the different types of level, although the vast majority have a eyeglass and a Bubble level as its fundamental components.

These telescope levels they are subdivided, in turn, into several categories, depending on the way they are used.

They were the first instruments used in topographic measurements for the difference in height and today they have practically fallen into disuse. They are based simply on a bubble level attached to a telescope or topographic telescope and a system of leveling screws, the whole assembly forming a single piece perpendicular to its vertical axis. The collimation line describes a turn in a horizontal plane (hence its name). However, the difficulty in setting the bubble in very large radii of curvature reduces the precision of measurements made with this type of apparatus, which over time have been replaced by others with different mechanisms.

Unlike the previous ones, at these levels the telescope is not attached to the tribrach and horizontality is achieved independently for each collimation line. They have a spherical bubble level for rough leveling of the device with the help of screws and a higher precision bubble level, which is moved with the telescope and whose axis must be parallel, by construction, to the collimation axis. This bubble level has a fine tilting screw, which allows the telescope-bubble level assembly to make small vertical turns, allowing the bubble to be drawn. The disadvantage they present is that the draft of this bubble must be carried out with the collimation of each point, a process that is very time consuming.

b) Automatic or self-leveling

As with the tilt levels, the automatic levels also perform a rough leveling when parking the instrument, but there is no need for further manipulation. This is possible because the collimation line is automatically horizontal with great accuracy at any point thanks to a compensating mechanism (activated by compensating mirrors, pendulum systems and others) so that the final leveling is carried out automatically. Although these are levels of limited precision, they have the great advantage of their simplicity of use and their speed, which is why they are widely used in inaccurate levels. Automatic levels are classified into two types:

i) Optics: they are the most common and use conventional stables.

ii) Digital or electronic: They can read bar code standards, obtaining the reading on the screen and being able to store it in a memory.

It is the most sophisticated type of levels, projecting a laser beam, both vertically and horizontally. Are divided into plane levels Y line levels and its use depends on the application. The plane laser levels They generate vertical, horizontal or oblique planes by means of a rotating laser beam emission system and are mainly used for leveling agricultural land. The line laser levels they emit a fixed horizontal or vertical beam that allows an alignment to be carried out and they highlight their greater application in the control of alignments and slopes.

Of all kinds of topographic levels seen, the optical automatic line levels They are the most used today for their simplicity, speed and cost-benefit ratio, with applications ranging from home building, gardening and leveling terraces to excavations, foundation construction and landscaping. 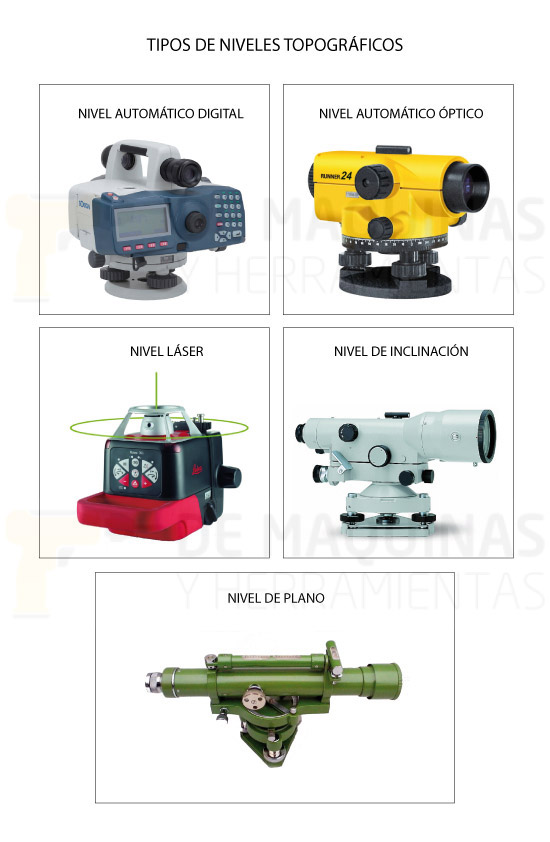 The educational video below describes the components in detail and a simple example of using a optical automatic line level.

Safety in the use of a multipurpose or oscillating tool

Compressors How to choose them according to the task to be carried out?