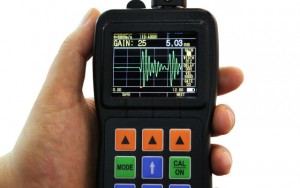 The ultrasonic thickness measurement It is a non-destructive testing technique for which it is not necessary to cut or section the material. It is a fast, reliable and versatile method that, unlike the use of a micrometer or a caliper, requires access to only one wall of the piece to be measured. That is why it is widely used to determine the thickness of materials such as pipes, tubes, valves, tanks, boilers and other pressure vessels, naval hulls or any material subject to corrosion and wear.

The first commercial ultrasonic meters used principles derived from sonar and were introduced to the market about 65 years ago. Small, portable instruments optimized for a wide variety of applications became common in the 1970s. However, later advancements in microprocessor technology led to new levels of performance in the sophisticated, easy-to-use miniature instruments that we now have at our fingertips.

What can and cannot be measured by ultrasound?

Virtually any common engineering material can be measured by ultrasound. Thus, it is possible to configure ultrasonic thickness gauges for metals, plastics, composites, fiberglass, ceramics, and glass. Often times, in-line or in-process measurement of extruded plastics and sheet metal, as well as individual layers or coatings in multilayer fabrications, can also be performed. Another interesting application of these devices is the measurement of levels of liquids and biological samples.

Materials that are generally not suitable for conventional ultrasonic measurement are those that exhibit poor transmission of high frequency sound waves, such as wood, paper, concrete, and porous products, eg foams. Before measuring rough surfaces, it is advisable to sand them with a grinder to a smooth finish. On the other hand, if surfaces with thick layers of paint are measured, it is advisable to scrape and then measure, or else deduct the thickness of the paint from the reading obtained.

How do ultrasonic thickness gauges work?

Ultrasound is the energy of sound at frequencies that exceed the limit of human hearing. Most ultrasound tests are performed in the frequency range between 500 KHz and 20 MHz, although some specialized instruments can operate at 50 KHz or less and at 100 MHz or more.

The operation of ultrasound thickness gauges is based on determining with great precision what is called flight time, that is, the time it takes for a pulse of sound generated by a small probe called ultrasonic transducer in traversing a part and returning to the device. The transducer contains a piezoelectric element that is excited by a short electrical pulse to generate a burst of ultrasonic waves. These engage within the material and go through it until they meet a back wall or other boundary. The reflections are then returned to the transducer, which converts the acoustic energy into electrical energy. We see a representation of the phenomenon in the following figure, where, of the many available, a double element transducer (transmitter / receiver) is used.

How does an ultrasound thickness gauge work?

Typically the flight time is only a few millionths of a second. The thickness gauge is programmed with the speed of sound propagation in the material (data that is easily found in, for example, the user manuals of these devices or even incorporated as a table in the same device) and the thickness is calculated automatically with the following mathematical relationship:

T = thickness of the piece

V = velocity of sound propagation in the material

Ultrasonic thickness gauges are factory calibrated for a number of common materials. It is also possible to store calibrations for different materials and transducers and then recall them when necessary. Every time the material or transducer is changed, or if the temperature of the material changes significantly, a calibration should be performed according to the manufacturer’s instructions. It is advisable to carry out periodic calibrations with samples of known thickness to verify the correct functioning of the meter, especially in critical applications.

Since sound waves in the MHz range do not travel efficiently in air, a drop of coupling fluid between the transducer and the workpiece for good sound transmission. Common couplers are glycerin, propylene glycol, water, oil, and gels, and are provided with the instrument kit. Only a small amount of coupling is needed, enough to fill the extremely thin air gap that would otherwise exist between the transducer and the part.

Parts that make up an Ultrasound Thickness Gauge

Although in the market we can find a variety of models with different functions and various applications, as we will see later, in the figure below we detail a basic meter with its main parts. 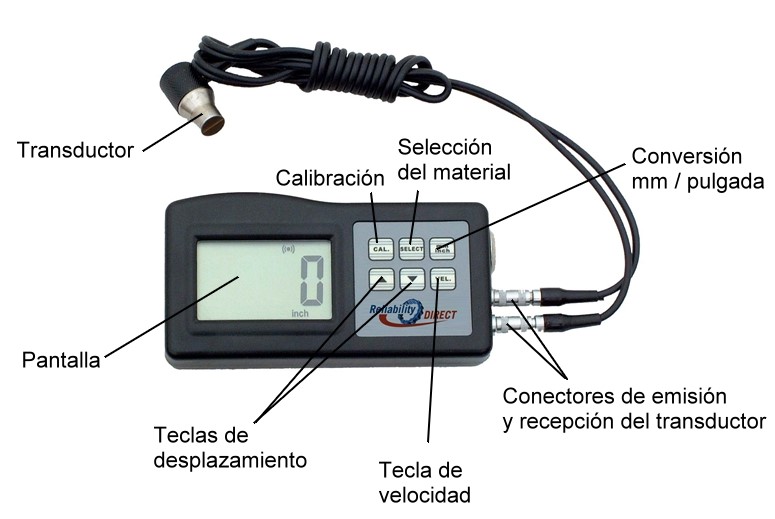 Parts of an Ultrasound Thickness Gauge

The displays are liquid crystal, offer 3- or 4-digit readings in both metric and imperial units, and are backlit. Some present only the thickness reading, while others (the most sophisticated) can also incorporate the representation in real time of the shape of the ultrasonic waves, as we see in the following figure. 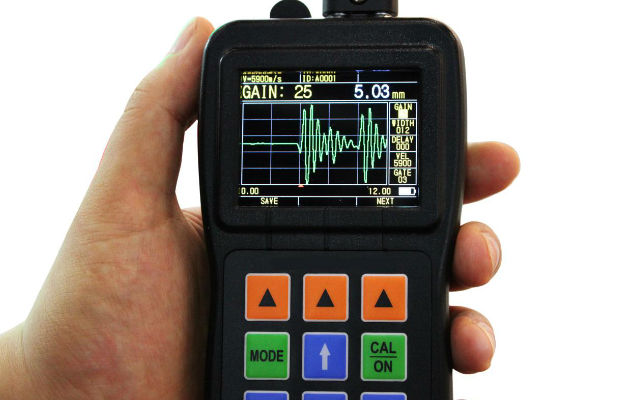 The material selection and speed keys allow you to make thickness measurements knowing either the type of material or the speed of sound in that material, respectively.

A USB or RS232 interface (depending on the model) allows the data stored in the device’s memory to be exported to a computer. Generally, this function is accompanied by software provided by the manufacturer, with which measurements can be saved and exported, statistics analyzed, graphs generated, and reports written and printed.

How do you use an ultrasound thickness gauge?

There are countless uses for an ultrasound thickness gauge. In the following video we can see an application example to measure the thickness of plastic pipes.

The great diversity of applications divides the offer of ultrasound thickness gauges into basically two large groups: precision meters Y corrosion meters. Each group has its respective types of transducers whose selection, in turn, responds to the measurement mode and to the particular application.

How to avoid hand and finger injuries in the workplace?

Safety in the use of measurement tools

How to choose an Ultrasound Thickness Gauge?