Introduction to the Wall Scanner 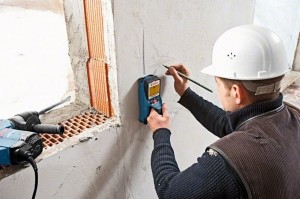 There is an immense amount of jobs, performed by construction professionals and amateurs alike, that require hammering or drilling surfaces to drive nails, screws, bolts or fasteners, for example. The assembly of pictures, mirrors, ornaments, furniture or shelves, the installation of fans, air conditioners, electrical outlets, recessed lighting or curtain rods, the inspection or demolition of walls, or the laying of electrical, telephone or television cables are some examples present daily in any building, both indoors and outdoors.

The risk that any of these activities could lead to hanging a piece of furniture on hollow bricks or drilling hidden pipes or cables is considerable and can not only cause material losses, but can also be extremely dangerous. Therefore, this task always depended on plans and diagrams, on the skill of the expert or simply, on luck.

In countries (for example, the United States) where most of the construction is based on beam frames and wooden and / or metal posts separated from each other at a certain distance, on which laminated plasterboard is subsequently fixed. (system Drywall) to form the walls, it is critical to find where these racks are to drill holes in them to allow furniture and other items to be hung safely. To this end, about 35 years ago the first beam detectors, based on ultrasonic technology, which still have wide application in these countries.

Over time, the features of these detectors were expanded to extend today to devices that, using electronic or radar technology, allow the detection of many other elements, in addition to beams and poles, hidden behind walls, ceilings and floors, indicating even how deep they are. These modern handheld devices are known as universal detectors of materials or wall scanners.

In this first article we are going to know how a material detector and in the next one we will provide an orientation about what we should take into account when buying a wall scanner which will be published in the measurement tools section.

In the figure above we see a diagram of a material detector typical provided with screen, with its main parts. Some devices incorporate luminous rings that indicate the detected material, others have scroll wheels on the back, while some others may have a front handle to facilitate grip with the hand and move around the surface to be investigated.

The fundamental components of these modern material detectors are: a) the LCD screen, where the results are displayed, and b) the various sensors located in its upper or middle part. These sensors are various, depending on the materials they detect, which can be:

How does a Wall Scanner work?

The way these materials are detected depends on their nature, for which, as we already mentioned, they use sensors of various types, based on electronic technology or radar technology.

The electronic technology presents three types of sensors designed to detect the various materials. Let’s see the detail below.

a) Detection of metal and wooden beams

Another group of 50/60 Hz sensors mounted on the device detects the presence and position of cables carrying current. The sensors act as receivers and if they detect a 50/60 Hz signal (the frequency at which household electrical current is distributed) down to a depth of approximately 5 cm, the unit emits light and acoustic signals. On some models, a bar graph can be displayed on the screen, which helps to determine the precise location of the cable. The number of segments displayed on the bar graph indicates the intensity of the current signal. These sensors are suitable for detecting wires with voltages from 110V to 230V, but they do not detect neutral wires or telephone wires.

This type of detection, adopted in the more sophisticated models offered by some manufacturers, uses ultra-wideband radar sensors, capable of detecting the same elements that we have just seen, but at a greater depth, and also plastic pipes, indicating, in all cases, how deep they are.

The following video shows the functions and use of one of these useful wall scanning devices that employ radar sensors, to give us an idea of ​​the many benefits we get from them.

Surfaces that allow the detection of hidden materials with the material detectors there are several, for example:

However, it should be noted that there are a number of factors that can affect the measurement result and lead to erroneous readings. These cases usually arise in the face of unfavorable circumstances, such as:

In addition, the wall scanner may indicate non-existent objects if used on metal surfaces and damp areas (for example, a concrete floor that has not yet fully dried) or if there are many voids in a wall.

How to use a Wall Scanner?

To overcome many of these inconveniences, the manufacturers of the material detectors or wall scanners recommend a series of tips for successful measurement.

First of all, the device must move slowly in a straight line along the surface, with a minimum travel of about 10 cm and an optimal travel of about 40 cm, always ensuring firm contact with said surface. It should be noted that objects whose material differs from the surface material are detected, and that the display indicates the type of material detected and the depth to which it can be drilled.

Due to the very operation of the device, the upper edges of the objects that are found across the direction of movement of the apparatus are those that it detects with greater reliability; therefore, the area of ​​interest must always be scanned in two directions perpendicular to each other.

How to cut a glass bottle?

Parts of a Torch