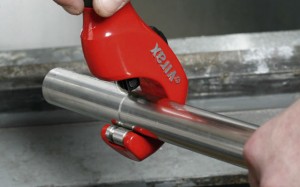 Plumbing or plumbing jobs constantly require cutting pipes of various materials, such as copper, aluminum, soft steel, plastics, etc. Currently, one of the most used in this trade is copper (mainly used in air conditioning installations). There are several types of tools for cutting harder materials. Although the tubes can be cut with a suitable saw, this tool can deform or leave a rough finish on the end of the pipe, for which it is most appropriate to use a saw. pipe cutter or pipe cutter.

There are different kinds of pipe cutters or pipe cutter. For the simplest jobs and soft materials, a pipe scissors, which has a shape similar to that of a common scissor, except that it is equipped with an adjustment system to press the tube. Once the tube is attached, it is rotated in such a way that the blade of the scissors gradually cuts the surface until a segment is separated. For the most efficient cutting in terms of speed and accuracy, and for harder materials, a pipe cutter or pipe cutter.

There are several types of pipe cutters, from the simplest for home use or for small jobs, to those of an industrial nature.

Pipe Scissors: is used for cut tubes made of soft material, such as PVC. It is a scissor in which one of its blades is replaced by a surface such that it is capable of turning with precision on the tube. The other blade is the cutting blade, so that as the tool rotates on the pipe it produces a slit that finally ends up separating a segment of pipe.

Pipe cutter or pipe cutter: it is a “G” shaped hand tool. The opening of the G serves to fit the pipe there, which is then adjusted to that space. The pipe cutter It consists of two rollers on which the tube rotates and, in the opposite place, a blade that performs the cut during the rotation. The blade and the rollers are moved by a crank that brings them as close as necessary.

Die Cutter: It is a tool similar to a thread die, which is used to cut the internal or external threads of cylinders. In this case, the slicer It consists of a hollow disk with three cutting blades that are arranged symmetrically towards the center of the circle. These blades are adjustable, so that they converge in the center leaving the appropriate space for the pipe to be cut through a circular movement. This type of tool can be attached as a complement to a lathe, in such a way that the cut is made automatically.

How to use a pipe cutter or letter tubes

As an initial step, we must mark the tube where we want to make the cut. Then we place the pipe between the two rollers of the slicer. We adjust the slicer to the outside diameter of the pipe, always centering the blade on the mark we have made on the pipe. We start turning pipe cutter making two full turns and then going back half a turn. Then we adjust again the slicer to further adjust the blade to the outer diameter of the pipe and make a full turn. Repeat this operation until the tube is cut. Keep in mind that the tube should not be tightened too much, because we can cause it to deform or damage the blade. In addition, it will be impossible for us to turn the slicer around the spout.

Usually the pipe cutters They are provided with a reamer, an element that is used to remove burrs or edges that may remain after cutting.

How to use a Woodworking Planer?

What is a double bench grinder and what is it for?

10 things to know about car polish