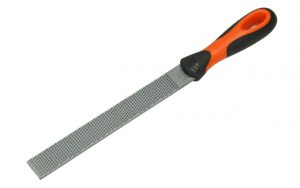 The lime it exists from practically the Preindustrial era; It is an extremely simple hand tool but a must have in almost anyone’s toolbox. Its main use is roughing metal, wood and, to a lesser extent, plastic parts. Is a tool ubiquitous, with dozens of different models.

In this note we will focus on the different types that are used in workshops and factories, the different existing profiles and their graduation according to the number of teeth. We will also see the difference between a lime, a rasp and a scraper.

In Spanish we commonly use the word lime to refer to a set of manual tools chip removal; among them we have the files themselves, the rasps and the scrapers. 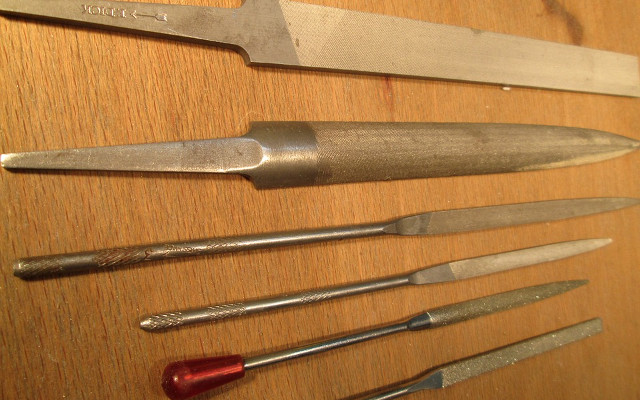 Are manual tools —as we have already seen— that allow roughing metals in general as long as their hardness is not excessive. There are many different models and they are used in various industries: from metalworking to carpentry, construction, medicine and personal care.

The limes used in construction and metalworking are also the most common in the shops of the branch: the flat parallel ones, the half-round ones and the round ones (models that we will see a little later, since they share their geometry with other types).

The construction of a lime it is simple: it starts from a steel strip to which successive millings are applied at an angle; first at a positive angle and then on intersecting lines to the former. Thus we obtain a pattern in X called the chopped, which is the generatrix of the teeth. 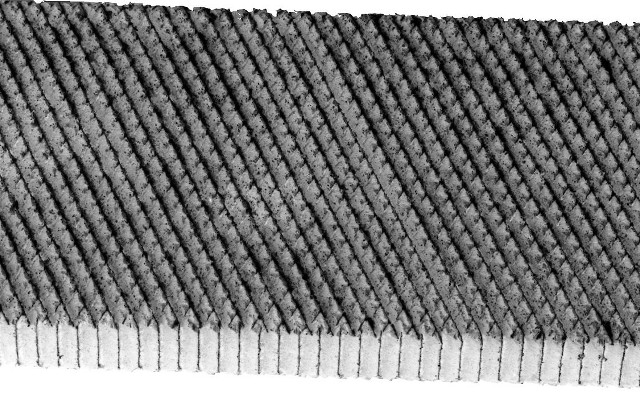 Detail of the cut of a bastard flat file.

Files can be classified according to the number of teeth per surface unit; the standard ranges from 18 to 1200 teeth per cm². They can also be graduated in a more colloquial way in bastard, coarse, entrefine and fine files; the former are used in coarse roughing and deburring tasks (for example to remove the oxide layer from the raw material and to kill the edges after a square shoulder in machining centers), the coarse and intermediate are used for approximation tasks to measure and the fine one for final adjustment tasks, before leveling with a scraper, or to prepare the surface for polishing. 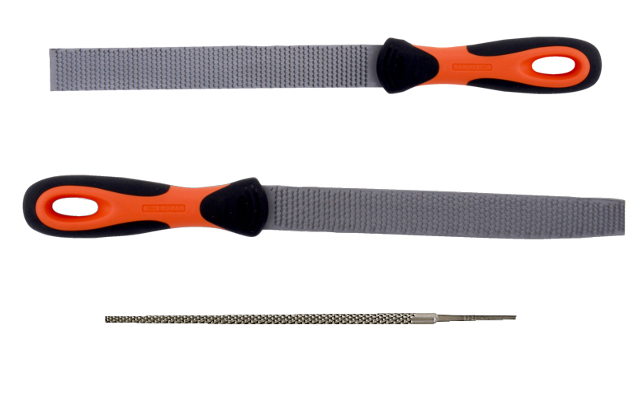 They are similar to files but are used for materials softer than metals, such as wood and some plastics that could paste the limes

The main difference is in the mincing: the rasp teeth are larger and the geometry is different. They are arranged in horizontal bands parallel to each other, which makes it easier to attack the wood, without allowing sawdust particles to get trapped between the teeth.

As with files, there are different geometries: flat, round, triangular, square and half round. 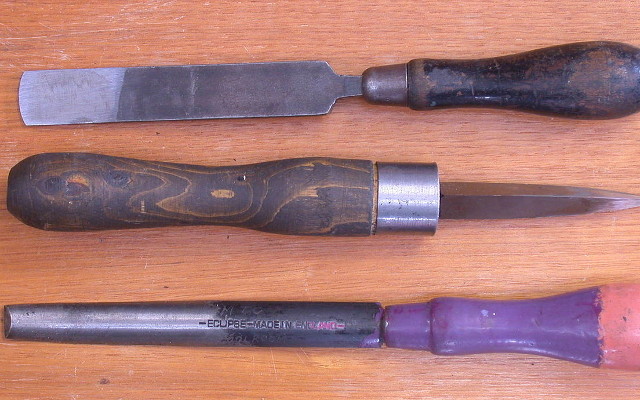 This tool can be purchased in specialized houses or it can be made from an old file. Unlike the rasp and file, the scraper makes use of the tip to achieve chip removal. Its work is similar to that of a gouge: metal surfaces are smoothed by chip removal (which is then controlled with a setting marble and Prussian blue).

The way to use this tool is very simple: the surface of an adjustment marble is painted with prussian blue and the surface to be leveled rests on it. When removing it, the prussian blue will indicate the points that must be lowered with the scraper. The task is repeated until the surface is reasonably flat. This is useful when the part is small and a grinder is not available.

Files in general (and here we are talking about rasps, scrapers and files) are not just flat; there is variety in the profile that the cutting faces acquire. Let’s see what they are. 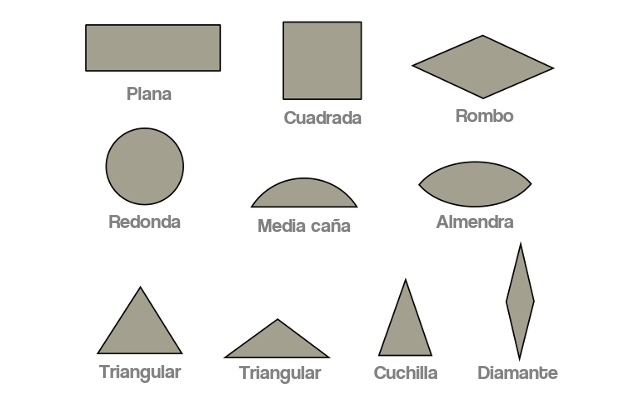 Flat files are used for deburring, roughing and trimming on flat surfaces. The same happens with half rounds, which are also used to adjust concave surfaces.

Almond profile files are used exclusively for concave surfaces. The round ones, to adjust holes.

The triangular one is used to mark a groove prior to cutting with a saw; It is also used for trimming interior flat surfaces where a flat file cannot access. The diamond file is used to fit V-grooves.

Finally, the limes blade and diamond are used in tooling work where it is necessary to fit sharp angled slots.

Correct use of the file 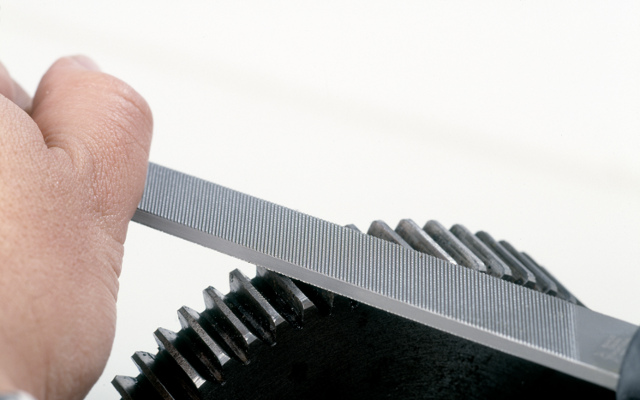 The lime should always be used with both hands. The handle should be held in the right hand and the other should be used to grasp the tip, with the thumb back and the remaining four fingers resting forward, only on the side that is not in contact with the material.

Any other position of the fingers presents the risk of pinching or cutting. 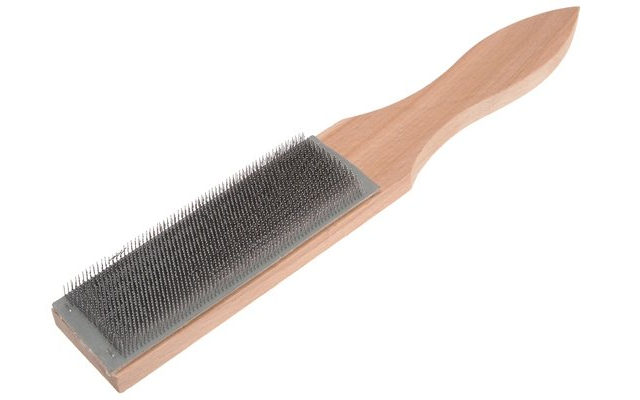 There is a tool special for cleaning files. It is called a carder, and it is simply a brush with fine metallic bristles, arranged on one of its faces.

When passing the card following the grooves of the file, all the material that is trapped between the teeth comes off, thus achieving the loosening.

What is a tape and how many types are there?