Types of Shovels according to their application 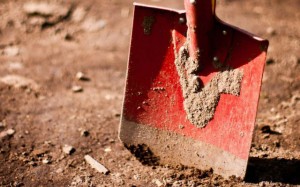 The shovel It is one of the basic hand tools used in different tasks such as construction, gardening, cleaning and, in general, to dig or move materials from one place to another. The shovel Traditional lifting consists of a sheet of metal or other resistant material, attached to a cylindrical handle long enough to be held with both hands and supported on one of the knees, as a lever, which facilitates the task of lifting small amounts of material. By the way, this is the elementary concept of lever applied to human work.

A shovel consists of two parts: the iron or plate at the lower end, usually metallic, rectangular and slightly concave, and the handle or rope to operate it. The shape of the metal sheet, as well as certain characteristics of the handle, depend on the task to be performed.

Form of Use of the Shovel

As has been said, the function of the shovel It consists of making the muscular work for the displacement of material or for the excavation less heavy. If we take its use in gardening as an example, the mechanics are as follows: the handle of the shovel with one of the hands; the other hand will take the middle part of the handle to exert the necessary force; with one foot resting on the upper edge of the metal plate, it is pushed down to achieve the excavation; then, with both arms the tool is raised in order to remove the soil using the plate as a container. There are various types of Pallas, which are described below. The Pallas Flat, they are generally used for moving materials from one side to another. When we want to make a well in the ground, we will use another type of shovel, called shovel for agriculture, which generally has an edge, which will be very useful when we come across a root.

Depending on the shape and material of the rigid end plate, as well as the characteristics of the handle, the Pallas They can be classified into several types:

Shovels for Agriculture: the Pallas for the work of the land they have a plate with a rounded and somewhat pointed finish (like a sharp edge) to facilitate the excavation task. In some cases, the lower part is flat to mark furrows in the ground and delimit the space to be excavated. The metal piece has a flat top edge to exert force towards the bottom with the foot. The end of its handle can be in a “T” in order to push down with the hand and arm, or it can also be triangular. In all cases, both the handle and its end are made of cylindrical wood.

Shovels For Gardening: there are some small Pallas which are used for domestic work in the garden. Its metal element is narrow and pointed, and its handle is very short, enough to be wielded with one hand. These shovels are very useful for digging small holes in the ground when introducing seeds or transplanting flowers or other species.

Shovels for construction: the Pallas to move construction materials such as cement, stone, sand, they usually have a longer handle and a more pronounced concavity in the lower plate, wide enough to cover a larger surface. This makes it easy to load small amounts of material and then dump it onto a wheelbarrow or truck bed for transport.

Shovels for the Toilet: they are the little ones Pallas, generally plastic, which have a square end perpendicular to the handle. They serve to collect debris, dust and other debris that were previously accumulated with the use of a dustpan.

Blades for Oven: is about Pallas with a flat and wide iron, as well as a very long handle. They are essential tools for removing food from large ovens without risk of burns. They are generally made of wood, a material that does not transmit heat.

Mechanical Shovels: the Pallas mechanical or chargers represent the motorized version of this tool concept. By assembling a large container in front of a tractor, the movement of large amounts of material is achieved, both for agricultural tasks and in construction.

In the video below we present, quickly and without too much depth, some of the stages of making the racket. In this case it is the company Biassoni from Argentina.

How is a shovel made?

What is a float or fratacho and what is it for?

How to use a Level?

How to level and position floating shelves, shelves and brackets correctly?