What are adjustable wrenches, what are they for and how many types are there? 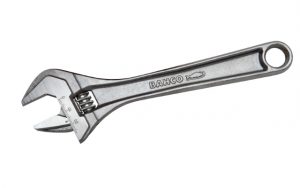 As with the case of tweezers, there is a wide variety of adjustable wrenches and, consequently, also a great disparity of different names for each tool that make up this large group. Wrench, french key, swedish key, dog key, monkey key… they are all curious denominations applicable in these cases and that generate confusion when acquiring any of those tools.

On this occasion, therefore, we will present the adjustable wrenches known (there are many others that are specific to various applications), as well as their main uses. Due to the multiplicity of names that characterize each of these keys, we will always accompany each description with the corresponding image, so that the reader can easily identify the key. tool referred to as it is called in each region or country.

The adjustable wrenches They are used in countless industrial, commercial and home applications and are a must have in every workshop or toolbox. Its function is to perform manual torsion movements to loosen or adjust nuts, bolts, bolts, screws and cylindrical surfaces of various types, they are available in hardware stores or hypermarkets and are divided into two large groups:

We will now focus in more detail on the adjustable wrenches.

As is often the case with other tools so useful, the invention of adjustable wrenches is attributed to several pioneers. However, it seems that the first adjustable wrench was designed in the middle of the 19th century in England by the inventor Richard Clyburn; hence the great tendency to call them generically “Wrench”. What is not clear, since there is no origin in this regard, is the reason why this tool also known as “french key”.

In the United States, on the other hand, and around the same time, a robust adjustable wrench of great size, designed for the wheels of carts that, for reasons still under discussion, was called “monkey key”. Its literal translation is “monkey key”, but many today identify this tool with other names.

As for the first Clyburn wrench, later modifications introduced improvements and the most successful led to the patents that the Swedish Johan Petter Johansson, from the company, finally obtained in 1891 and 1892. B.ernt TOugust Hjort & Company, later shortened to BAHCO.

Precisely Johansson had invented in 1888 another special key for plumbers that was used to rotate pipes and presented modifications of the one already patented by the North American D. Stillson 20 years earlier. 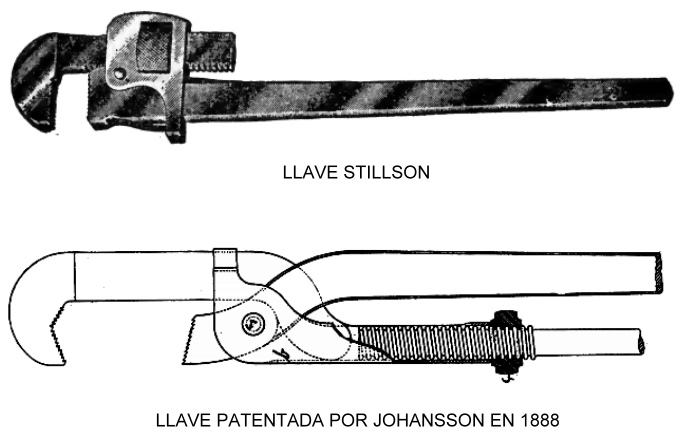 It was no coincidence then that these inventions of Johansson began to be known in many European countries as “Bahco key” or “swedish key”.

Therefore, now that we have introduced the main adjustable wrenches, let’s know how they look and are used today.

Also known, depending on the country or region, as “french key”, “Bahco key”, “crescent key” or “swedish key” are by far the most common type of adjustable wrench.

They feature two smooth, parallel faces or jaws, offset at an angle of 15 degrees relative to the handle, so they can be used in confined spaces. One jaw is fixed to the constitutive body of the handle and the other jaw is mobile, allowing opening and closing with respect to the fixed one. The mobile clamp is provided with a toothed rack to which a helicoidal screw (worm screw) engages which, when turned manually, modifies the opening of the faces to adapt to different measurements of the element to be rotated.

The wrenches They are generally made of stamped forged steel and are chrome plated to prevent corrosion. The tools High-quality ones are usually made from chrome-vanadium alloys and in some cases even titanium. They are also marketed in stainless steel versions, as well as with the appropriate treatments and/or accessories to meet the corresponding requirements for tools insulated, anti-spark and anti-fall.

They come in a wide variety of sizes, referring to the diameter of the nut or bolt head that fits between the jaws, which can be metric (millimeters) or imperial (inches or thousandths of an inch). Recognized firms offer, for example, wrenches metric with a length between 110 and 770 mm and a jaw opening between 13 and 85 mm.

The correct use of a Wrench requires full tightening of the movable jaw to the nut or bolt head to prevent damage, known as “rounding,” to these items. They should not be used with elements that have already been rounded, as this can cause an overload on the moving jaw. They should also not be used upright in very confined spaces, places where a socket wrench is the proper tool.

In the table below we mention only a few main uses of wrenches. 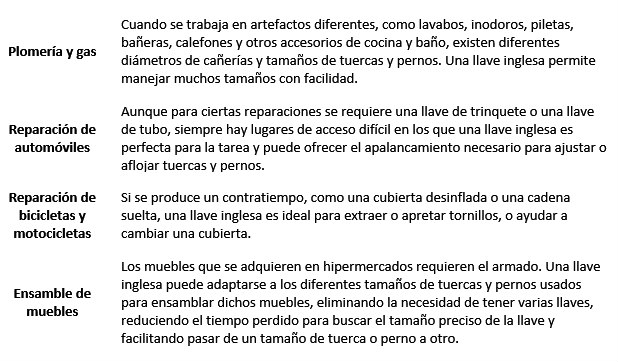 The market offers wrenches with many optional features as needed. For example, many manufacturers have lines of keys provided with a graduated scale in millimeters or inches, which allows you to quickly see the size of the fasteners to be turned.

Also available wrenches in which the other end incorporates an old open-end wrench design from the early 20th century, known then and now as “crocodile key”. This design consists of an angular “V” cut recess on both sides of the jaws so that the jaws can hold any nut or bolt that fits between them.

Other models introduce a side-knurl design, whereby the wrenches offered are 30% to 40% more accurate than the center nut system at equivalent sizes. 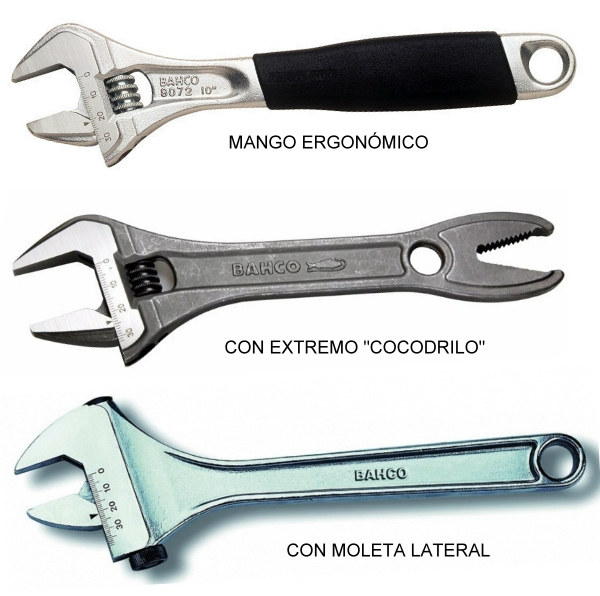 Other lines are provided with ergonomic handles that improve the use of manual force and provide a safer grip in different work positions, minimizing the possibility of accidents. There are models of ergonomic lines that have keys with a wide opening of the jaws (up to 55 mm) or, they include a knurled face so that these keys can also be used on pipes.

All these options are presented in phosphated or chromed finishes, with a precision tempering and anti-corrosion treatment that meets strict ISO, ASME, DIN and UNE standards.

The traditional Stillson key, also known as “griffin key” or “dog key”, was specifically designed to fit connections and accessories between pipes. To do this, the jaws have serrated or rough surfaces to facilitate gripping when the key is turned and the lower jaw can move up or down to adapt to the size of the object to be clamped.

Details about this useful tool for mechanics and plumbers we already mentioned them in this article. In turn, in this video we can see how it is made and how it works (note that the title “Wrench” differs from the denomination we use in this article for these keys).

There are various models of stillson keys that is important to take into account according to our needs. Let’s know the most used.

JP Johansson’s invention of 1888 especially for plumbing applications is still today what is called “iron hand” and markets it under the name “spout wrench”, which represents several improvements with respect to the Stillson wrench standard. In other countries it is known as Swedish key.

The tool It has two handles, one of which has a regulation nut that is used to close the mobile jaws around the pipe or accessory. Since it closes with great force, it is not necessary for the tool engage the nut or bolt head to which it applies.

They are generally made of alloy steel, with induction hardened jaws and a phosphated finish with anti-oxidation treatment, or in more expensive models, with a nickel-plated and chrome-plated finish for maximum resistance to oxidation.

They come with common handles (their total length can exceed 100 cm for pipes up to 5 inches in diameter) or ergonomic ones, and they come in two versions: universal and for corner pipes, whose jaws are oriented at 45° for work in corners. or corners of difficult access.

The infographic below shows the design of this particular adjustable wrench, as well as its main features and functions. 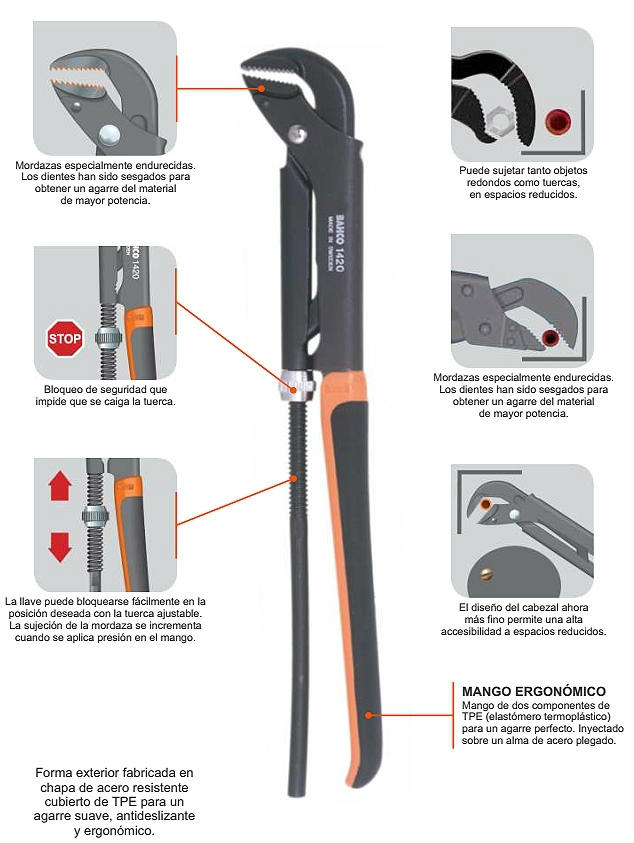 As we stated above, the monkey keys They were designed more than 150 years ago to tighten the nuts of wagon wheels, for what they were and are tools very robust always used in large-scale work. Because they are not very manoeuvrable, their popularity has decreased considerably in recent times in favor of the Stillson wrench, since the latter can fulfill all the functions of a monkey key, while the reverse is not always applicable.

And although many confuse them with stillson keys, because in both types the jaws are adjusted by means of a worm gear that is turned with the thumb, the difference lies in the surface of the jaws. As seen in the figure below, a monkey key it has smooth jaws that are always perpendicular to the handle, while a Stillson wrench has serrated jaws and, depending on the design, as we saw above, they can be located perpendicular or parallel to the handle. Due to its smooth jaws, the monkey wrench is more suitable for turning nuts and bolts rather than clamping pipes and tubes.

Although they still find frequent use in heavy-duty jobs in the aircraft industry, primarily when trying to tighten or loosen large but low-torque fasteners, monkey wrenches, as noted earlier, have been displaced by Stillson wrenches, or good for wrenches with wide opening jaws, that is, easily adaptable to large nuts and bolt heads.

Introduction to the Welding Torch

Types of Screws for Electric Screwdriver