What are flap discs and how many types are there? 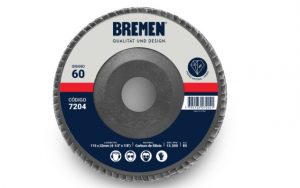 During these last 15 years, flap discs have been the fastest growing abrasives category in the industry metalworking and others. The reasons for its breakneck progress are various.

From a product performance standpoint, they offer fast chip start-up and provide grinding, deburring and finishing operations with a single product and at a lower total cost. They are also capable of making a clean cut with less overheating, cracking and burning than common abrasive wheels.

From a user perspective, they are widely preferred to be lighter, easier to control, and require less downtime between shifts. No less remarkable is the reduction in vibration and consequent fatigue, as well as the reduction in noise.

With all these benefits that today offer the flap discsIt is important to know them in greater depth and then know how to choose them properly for our projects. Therefore, in this article we are going to start with the first part to learn the basic information that characterizes a disco flap.

How is a flap disc composed?

Precisely the name of this cutting tool responds to its own structure. The flap discs have a coating of abrasive material that adheres the grains – the same types of grain found in bonded abrasives – to a plate of medium, which, as we will see later, can be made of different materials. This backing plate is then cut into smaller sheets and radially stacked in multiple layers to form a disk of sheets, lapels or fins (from the English “flap”) that in this way are attached to a central nucleus.

While the first flap discs For high speed angle grinders they were developed about 40 years ago and were rather basic, the current versions offer great diversity. For many connoisseurs, if what we are looking for is a superior finish and greater ease of use during operation, the disco flap far exceeds the common grinding wheel.

This statement responds to the series of advantages incorporated by the flap discs, which although they are more expensive than an abrasive wheel, in the long run the greater investment translates into better performance. Let’s examine some of the advantages of flap discs.

The material of the support plate for a disco flap it is an important variable that determines its application. The most common materials are:

Fiberglass: Stronger, more durable, lighter and safer, fiberglass is currently the most popular of the supports, as it creates a strong bond with adhesives and does not contaminate the work surface. This type of plate is consumed during use and absorbs vibration very well. The fiberglass support is made up of layers of fiberglass joined in a lattice and pressed together. The more layers there are and the higher the density of the mesh, the stronger and more durable the support is, so this is a consideration to keep in mind when examining the detailed specifications of a disco flap.

Plastic: Almost as popular as the previous one, the support made of plastic material, and particularly nylon, has many followers. Plastic holders have the advantage of being able to be trimmed, which allows a longer use of the sheets, especially during deburring and finishing. Today, plastic is becoming an increasingly attractive option due to its formability and low cost.

Metal: Metal backing plates, commonly made of aluminum, are the safest option and exhibit excellent properties when additional strength and firmness is required. Since metal plates are expensive, they should be used when the expense justifies it, for example when working on concrete or stone applications. The metal holder is not consumed during use, but the plates can be easily recycled when the disc ends its useful life.

Although flap discs they knew their rise thanks to the industry They can be used for a wide variety of applications, whether it be metal or wood, concrete grinding or finishing, stone smoothing or finishing, paint or rust removal, and many more. The material that makes up the abrasive grain of a disco flap it is fundamental to our specific work needs and can be of various types. Here are the most common ones, although there are more.

Aluminum oxide: This is the original material that was used for metal grinding in the 1970s, when grinding wheels were first introduced. flap discs. It is also the lowest cost option. Today aluminum oxide abrasive is recommended for small jobs where the quality requirement is low to medium.

Zirconium: characterized by its good thermal properties, hardness and high resistance to wear, its higher cost guarantees a prolonged use and less downtime, which is why it outperforms aluminum oxide and is currently the most used material for metal machining . Typically used for general steel grinding and finishing work, which also includes stainless steel applications.

Silicium carbide: the natural mineral form of silicon carbide is elongated, thin and sharp, so we can imagine a disco flap of silicon carbide as coated by thousands of tiny but very sharp blades. Generally, silicon carbide abrasives are ideal when a clean cut is needed on non-ferrous metals such as brass, aluminum or titanium, as well as other materials such as natural stone, brick, tile, wood, leather and glass, although they are not very effective in applications requiring high pressure on the disc.

Ceramic oxide: It has a microcrystalline structure and is more uniform than that of aluminum oxide or zirconia abrasives, which allows it to break in a controlled manner, expanding the range of available applications. However, it is important to note that ceramic abrasives are particularly sensitive to heat and pressure, which means that a properly designed process is essential for their successful use. At the same time, ceramic oxides are showing excellent performance in aluminum castings, mild steel, stainless steel finishing, and many of the titanium alloys commonly used in aerospace applications.

When we speak of abrasive density we must think of the total abrasive area provided by the blades of a disco flap. This area depends on the number of lamellae present in a disk, their angle from the center of the disk, and the distance at which they are spaced. Each of these variables can affect the total area of ​​the wheel that will be in contact with the workpiece. To this end, we can distinguish two types of densities:

High density: high-density sheets are best suited when working on curved or irregular parts, as well as during finishing.

However, as we stated above, to correctly differentiate between two discs which may be specified as ‘standard density sheeting’ or ‘high density sheeting’, rather than merely looking at their density rating we must always consider the number, angle and spacing of the sheets as a whole.

All those who work with grinding wheels are familiar with grain size. The flap discs they are no exception. Grit sizes range from coarse (low number) for roughing, to fine (high number) for finishing, to intermediate for conventional sanding.

The chart below shows the recommended uses for each abrasive grain size and density. 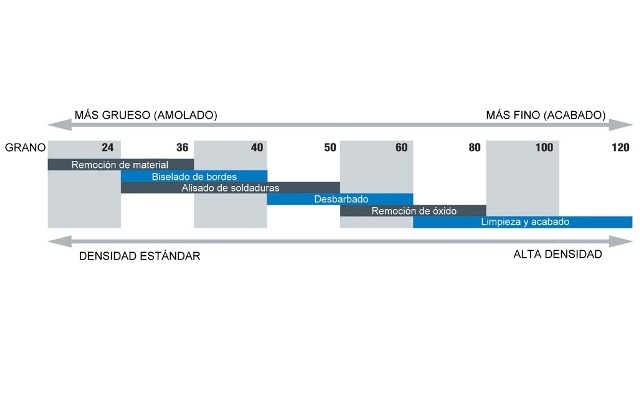 The flap discs They are designed for use in angle grinders, allowing them to work at a shallow angle or even flat to the surface of the workpiece. The angle formed by the blades of the disc with the piece will directly affect the aggressiveness of the cut.

To this end, there are two basic designs that we must know and that is presented in the figure below:

Flat discs: they are generally preferred for more controlled grinding or finishing applications where less pressure is applied to the disc. They have a smooth grinding surface and are used primarily for working on flat surfaces and outside corners. The angle between the disc and the workpiece varies between 0 and 15º, being able to grind and polish at the same time, which reduces the workload. Type 27 discs can also be made of convex shape or depressed center, allowing a greater contact surface between the disc and the workpiece.

Conical discs: In this case the blades are arranged at an angle, so the discs offer a greater surface area for the extraction of material on horizontal surfaces, since during operation the disc forms an angle of 15 ° to 25 ° with the part of job. This makes them ideal when a large amount of chip removal is required in a short time. They can also be used for contour and edge or edge work.

Once we acquire and understand this knowledge, we will be in a position to decide what is the disco flap suitable for our purpose. In a future article we will specify the details to take into account to help us make a successful election.

What is the inspection process in aluminum machining?

What to consider when choosing a MIG/MAG welder?