A milling machine is a machine tool whose function is to create pieces of certain shapes, through a process of machining of them, with the use of a rotating tool called Strawberry. The machining It is a manufacturing mode by removal of material both by abrasion and chip removal.

A milling machine It can be used on a wide variety of materials: it is usually applied to metals, such as steel and bronze, as well as wood and plastic.

The first of these machines is recognized as the one invented by eli whitney in 1818, in order to fulfill the order of the government of the United States of America to mass-produce 10,000 rifles at a low price. For the time, the production of weapons was carried out by hand with a large amount of manual work. Instead, with the use of milling machine the constituent parts of weapons could be made according to a pattern and thus speed up production.

Subsequently, this type of machine tool evolved allowing different kinds of mechanized, and consequently were born different milling machines in order to meet the growing needs.

within the families of milling machines the following can be distinguished:

The horizontal milling machines They consist of a column where a cylindrical milling cutter it is supported at one end and at the other by a bearing. The main function of this device is the production of grooves of different thickness, as well as several of those at the same time with special strawberries parallel, which are known as “milling train”, thus improving work productivity. See video horizontal milling machine

The vertical milling machines on the other hand, they have the tool-holder spindle so that the Strawberry rotates on its horizontal axis and perpendicular to the piece. A characteristic of this tool is the possibility of moving vertically, as it raises the table with the part or the head descends towards it. See video of a homemade vertical milling machine!

Two subtypes of this machine are known. On one side is the fixed bed vertical milling machine, whose peculiarity is that its head is without more movement than that of the cutter, then the movements that create the machining they only come from the table.

On the other hand, there is the vertical turret milling machine, which differs from the previous one because its head can make a horizontal movement of 180° with respect to the horizontal axis of the part.

Lastly, we find the universal milling machines, whose particularity is that it has two tool holders: the first is in the head, where the spindle for the milling cutter is located, with a wide range of movements in different directions, both horizontally and vertically. The second is on your table with the resemblance of a lathe, where the piece to be machined is placed. With both tool holders working together, parts of amazing complexity can be created. This milling machine stands out from the previous ones for its versatility at the time of work. See video universal milling machine 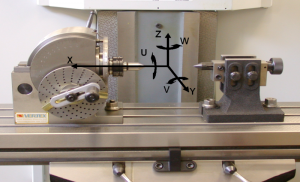 Axes of a milling machine

Depending on their ability to move the cutter through the part, the milling machines They are divided into the following families:

three-axis milling machines: these machines are characterized in that their machining capacity is oriented through the three planes of the Cartesian axis. In the photograph that appears above, the five axes through which a milling machine can machine are evident, a three-axis machine can do it sideways (X), in depth (Y) and in vertical movement (Z), whether it is produced by the head that descends like the table that rises towards it.

The four axis: in this case the artifact can mill through the three previous axes, plus a circular axis from the center of the head with the milling cutter working vertically that can go to the right (W) or to the left (V).

The five axis: those of this type have the same axes of movement as the previous ones, but include a horizontal rotary movement of the part so that it can be combined with the others to create more complex machining.

It should be noted that the universe of milling machines is not limited to the aforementioned families, but there is a variety of them to achieve specific machining objectives.

A particular model is wood router, it is used in DIY and carpentry especially to make grooves in flat surfaces or dovetails. It uses milling cutters for wood with the particularity that its teeth are larger and more spaced with respect to metal ones, because they have to evacuate chips. 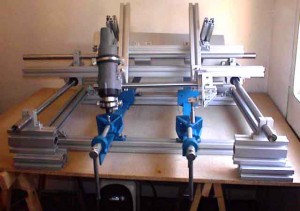 Another model is copier. Here there are two tables, on one a model is positioned and there is a “probe”, on the other table the part to be machined and the milling cutter are positioned. The probe contours the model and its shape is replicated in the part thanks to the action of the cutter.

The circular milling machines They have the particularity that their rotary table allows machining operations with a head with one or more tool holders.

To work with large pieces in size, they were designed mobile bridge milling machines, whose head moves as if it were a crane to reach different points to be machined.

Finally, one finds the computer numerical control (CNC) milling machines) whose characteristic is that the computer has a digitally designed model and then copies it to the piece. They are machines designed to produce a very high number of parts with a high level of precision, since the movements are guided by the model in the machine’s memory.

To receive the latest news in your e-mail you can subscribe here and unsubscribe whenever you want!

Safety in the use of the saber saw

What is a tool cart and how many types are there?