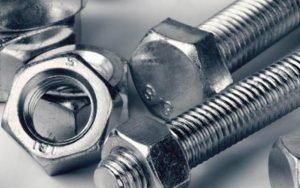 Since very ancient times, threads have been part of our daily life, to the point that today it is difficult to find any mechanism that is not based on or that makes good use of the principle of the screw, the main “threaded” element.

Initially, the construction of the threads it largely depended on the skill and keen eye of the craftsman. However, in the eighteenth century the first advances towards the standardization of certain parameters were introduced, since the production of screws had ceased to be a trade to become an industrial process, so that in the middle of the following century the standards for threads that apply to the present day.

However, for better or worse, it was almost a coincidence that two inventors, one in Great Britain (J. Whitworth) and the other in the United States (W. Sellers) independently and almost simultaneously proposed different standardizations based on the imperial system of measurement, which were adopted in each of these countries. Not to be left behind, metric Europe struck back with its corresponding contribution, adopted from French and German standards, and this is basically the reason why today there are so many different types of thread used all over the world and that it is useful to know.

Although the applications are numerous, the main functions of a thread they are three:

Based on these functions, a wide thread classification which we will see later, but first we must dwell on a series of fundamental concepts.

How is a thread defined?

To know and understand the differences between the various types of threads, we are going to briefly define what are the parameters that characterize a thread.

parts of a thread

Fillet or thread: helix-shaped prismatic surface that is constitutive of the thread.

Flank: side face of the fillet.

Crest: outermost part of the thread, or, joining the flanks on the outside.

Valley: innermost part of the thread, or, joining the flanks on the inside.

Thread or flank angle: angle measured in sexagesimal degrees, formed by the flanks of a fillet according to an axial plane.

Step (P): distance between two consecutive crests, which represents the length that a screw advances in a 360º turn. the passage of a thread it can be fine (F), coarse or normal (C) and, in a few cases, extra fine (EF). The general trend of the last 20 years points to the widespread use of the coarse pitch, leaving the fine pitches for particular cases, for example, adjustments, engine screws, etc. These cases are less numerous and the fastening elements with a fine pitch are gradually becoming special elements with their consequent economic, availability and term drawbacks.

The most important advantages of fine pitch are:

However, most assemblies do not present static load but rather dynamic load, where fatigue strength is the main criterion for calculation and design. In these cases, the coarse pitch resists fatigue better, since as the pitch increases, the load at the bottom of the thread decreases. thread. Resistance to loosening due to vibrations in the coarse pitch has been significantly improved with the development of braking and locking systems, both mechanical and chemical, which offer better solutions to preload loss, especially after transverse dynamic stresses.

The advantages of coarse pitch are:

How are threads classified?

The threads They can be grouped according to various parameters. In the following graph we present a classification based on the parameters that appear in the first column.

According to the parameters of the classification that we have just seen, there are more than 20 different classes of threads, which we can consult here. However, in this article we are going to detail only the most widely used ones.

a) Union threads for general use

It is cylindrical (or parallel or straight) in design and is formed by a helical fillet in the shape of an equilateral triangle with truncated crests and rounded valleys. The angle formed by the flanks of the fillet is 60º and the step, measured in millimeters, is equal to the distance between the vertices of two consecutive crests. 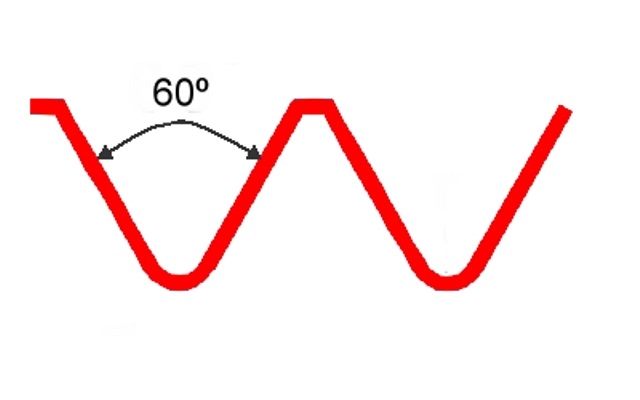 It is named according to ISO 68-1 and ISO 965-1 standards. If it is coarse, it is designated with the letter M followed by the value of the nominal diameter in millimeters, for example:

If it is a fine pitch, the letter M is followed by the nominal diameter in millimeters and the pitch in millimeters, separated by the sign “x”, for example:

The metric thread It can also be used to join pipes, with the characteristics shown in the following figure, it is mounted on the same cylindrical thread and the seal is ensured by an O-ring or washer. 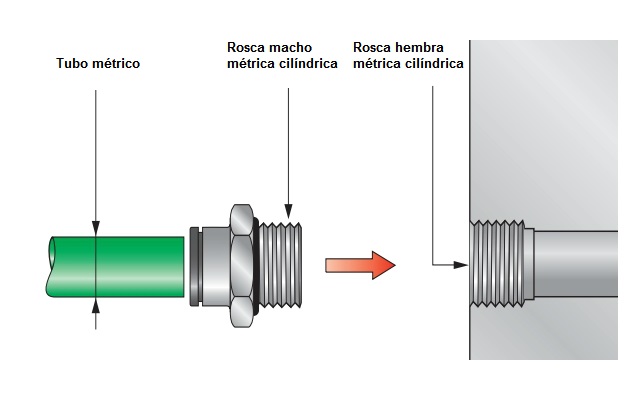 It is identical to the ISO metric thread in terms of design and flank angle, with the difference that its dimensions respond to the imperial system. It is designated according to the ANSI/ASME B1.1 standard, with the letters UNC before the nominal diameter in inches and then the pitch in threads per inch, for example:

It is widely used for mass production of screws, bolts, and nuts, and other industrial applications, especially threading in low tensile strength materials such as cast irons, mild steel, and soft materials for maximum tear strength. the bagel. It can be applied where rapid assembly and disassembly is required or where slight corrosion or deterioration is possible.

It differs from the previous one only by the step and by the denomination, where only the letters UNC are replaced by UNF. It has general use, although it is more tensile and torsion resistant than UNC and even resists vibration loosening.

b) Union threads for pipe

derived from the original Whitworth thread (with little use today) has the shape of an isosceles triangle and the angle formed by the flanks of the fillets is 55º. The shortest side of the triangle is equal to the pitch, and the crests and troughs are rounded. The nominal or outside diameter of the thread is expressed in inches, and the pitch is given by the number of threads contained in one inch, so it is expressed in threads per inch. 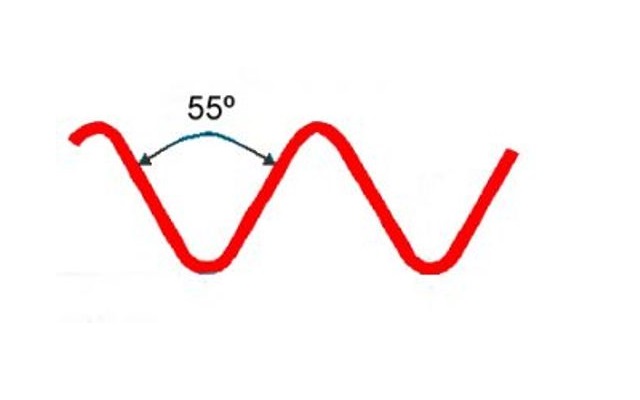 It is commonly used in low pressure plumbing, although it is not recommended for medium and high pressure hydraulic systems. According to its design, it presents two variants:

cylindrical thread (or straight or parallel, BSPP) – Mounts on the same cylindrical thread. Sealing is ensured by an O-ring or washer. It is named with the letter G followed by the nominal diameter of the tube in inches according to ISO 228-1. For example:

conical thread (BSPT): Mounts on the same cylindrical or tapered thread. Watertightness is ensured by a previous coating on the thread. It is named with the letter R followed by the nominal diameter of the tube in inches according to ISO 7-1 standard. For example:

The figure below represents the connections and compatibilities between the types of threads BSPP and BSPT. 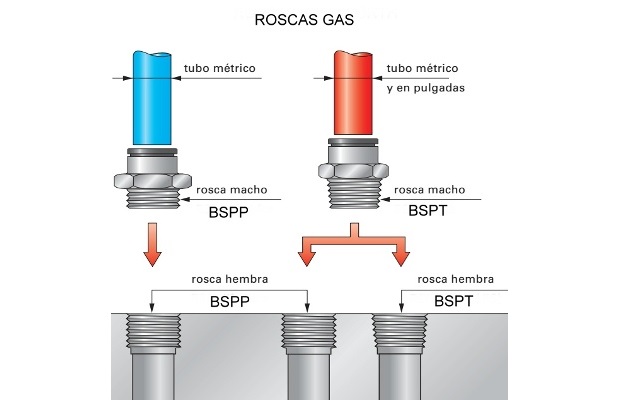 It has a conical design, the fillets form an angle of 60º and the crests and valleys are truncated at 1.8º. The diameter is expressed in inches and the pitch in threads per inch. 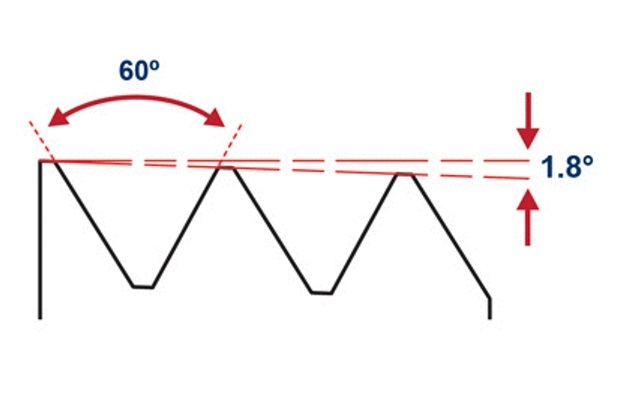 It is mounted on the same conical threading and the tightness is ensured by a previous coating on the thread. It is designated according to ANSI B1.20.1 standard with the letters NPT before the nominal diameter in inches and the number of threads per inch separated by a hyphen. For example:

In the case of having a thread to the left the letters LH are added. The figure below shows the connections of an NPT thread.

Comparison between the most common types of thread

In the graph that follows we can see more clearly the main differences between the most common types of thread. 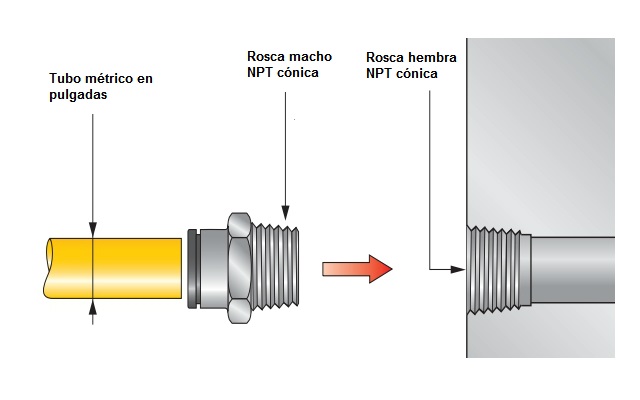 Comparison between the most common types of threads

When we know all this information correctly, it is easier to identify the various types of thread, as well as establishing possible compatibilities and deciding which is the most suitable sealing element or method for our threaded union in pipes, for example.

On the other hand, we can also handle certain details about the types of threading and what are the machines and combs offered by the trade for that purpose.

We will be dealing with these topics in future articles.

Safety in the use of a multipurpose or oscillating tool