What are Threading Dies? 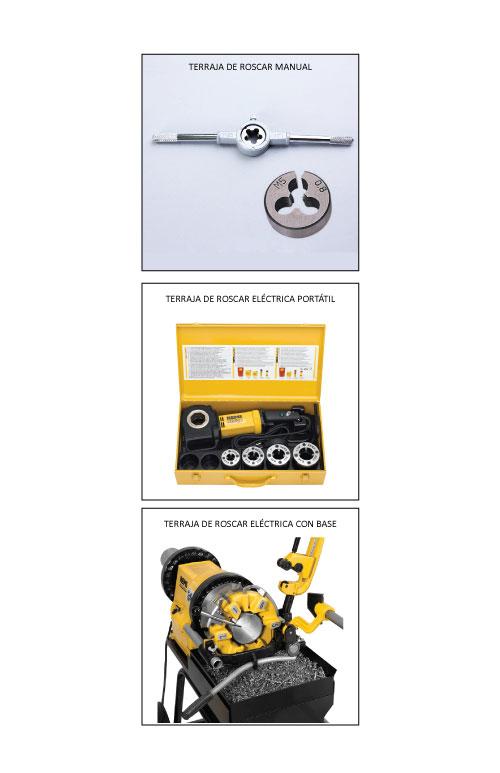 The threading die It is a hollow circular tool made of high speed steel that allows the cutting of the spiral that forms the thread of screws, bolts or tubes. It is also often called threaded bearing. It is used to make male-type threads, either for pipes or screws. There are different sizes of this tool, which coincide with the standardized graduations of screws and other threaded elements. Although the threaded bearing most common is used manually, there is also the electric version. The dies are used both for metal pipes (for example gas pipes) and for plastic pipes (water pipes) and also to make threads for screws and bolts.

Parts of the thread die

The threading die or threaded bearing It consists of a hollow cylinder, and is complemented by a bar called die-holder to hold it and perform the necessary force.

The slice: the thread it is a flat cylinder, sometimes with a hexagonal outer circumference. The piece is openwork with a symmetrical clover-shaped figure. The edges that face the center are the blades that, when turning on the cylindrical part to be threaded, make the cut in a spiral shape, according to the corresponding measure. Usually we will find dies metric or imperial and that in the same measure, go from number 1 to number 3. These numbers are the ones that indicate the type of roughing that the threading will give us, either to start the thread and to finish it.

The die holder: the die-holder It consists of a long bar with a circumference at the center or at one of its ends. Within this circumference is the thread, in such a way that it remains fixed, either because its external hexagonal surface or a series of fixing screws lock the tool inside its container. This bar is used to carry out the necessary force in the circular movement that must be exerted on the cylinder that will become a screw, a bolt or a threaded tube. At the time of purchasing the die holder, you should keep in mind the size of the thread that we will use, in order that the die holder be of a suitable size to be able to carry the thread.

Easel or tripod: Depending on the type of work to be done, some dies They are provided with a tripod or easel that contains a clamp for gripping the pipe to which we will make the thread. This element is generally used when the pipe is long or it is inconvenient to reach the end of it to pass the tap.

Form of Use of the Thread Die

The piece, whose outer diameter must be threaded, is placed perpendicularly through the central hole of the thread, using a press to hold the element to be threaded, in such a way that it is completely firm. The thread rotated on the piece using the bar or die-holder. A lubricating oil must be used during the cutting work, to reduce friction. As the turn progresses, the inner blades cut the metal into a spiral shape corresponding to the appropriate graduation for the screw that will be obtained as a result of this operation.

As you progress with the threading of the piece, it is recommended to back up a little and then continue forward. In this way, progress is made at a slower pace, but with a better result (cleaner thread and better finish). For example, once we make a 360° turn with the tap, we go back 180°. Then we move forward again 360° and back again 180° and so on.

The threading dies or threaded bearings traditional are manual, although there is also the electric threading machine, more efficient in terms of threading speed.

Manual Die: the thread Manual is the typical assembly made up of a high-speed steel die hollowed out in such a way that the blades protrude towards the center, plus a bar or die-holder that allows the force and the continuous rotation necessary to thread the corresponding part.

Electric Tap: It is a machine that, following the principle of thread manual, performs the work with greater speed thanks to an electric motor that produces the necessary turns on the cylindrical part to be threaded. exist electric threading machines of different sizes, from the portable version, with a handle that can be held in the hands while the end piece rotates to make the thread, to industrial models with the possibility of choosing graduation and other characteristics of the operation.

exist dies metric and imperial. Take into account when making the purchase what size and type of thread we need to make. The material to be threaded and the material that we must use must also be taken into account.

How to choose an endless bench saw machine for cutting wood?