What is a Balance or Eccentric Press? 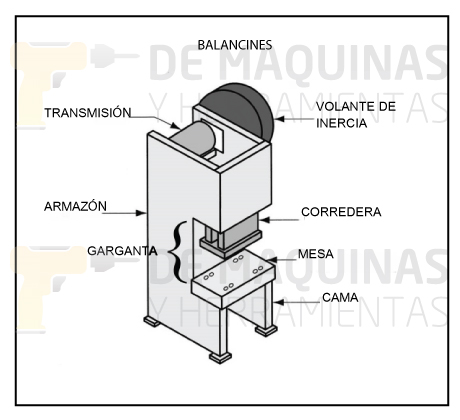 The sheet metal work It’s one of the material transformation processes most used in the industry. Includes operations of cut and formed (folded and stuffed) that are usually performed cold on thin metal plates that come from the process of laminate, whose thickness generally varies from 0.4 mm to 6 mm.

The machines that carry out these works are the presses, of which there are countless types and models, according to the function they perform, such as the sheet metal bending machines that we described in this blog a while ago.

Punch presses of various capacities, power systems, and frame classes are available on the market. Within the varied range, the simplest and least rigorous designs comprise the so-called rocker arms or eccentric presses. In some countries these two terms are used as synonyms. In others, minimal differences between the two are recognized, in the sense that the rockers They exert less pressure but have higher speed than other presses. And finally, these machines are also known by the name of mechanical presses, mechanical die cutters, tilting eccentric presses or mechanical rockers. For practical purposes, in this article we are going to unify the denomination as rocker.

As we can see in the figure, the basic design of the rockers It is very similar to that of the simplest presses.

PARTS OF A ROCKER

It is a machine tool formed by a bed or frame, a desk fixed or movable and a slide or tamper that moves vertically. On the table is placed matrix and on the slider is fixed the awl. The slider is actuated by a mechanism of eccentric attached to one connecting rod, which transforms the circular movement of the axis driven by a motor, into a reciprocating movement. The deforming stress is obtained from the kinetic energy produced by the rotation of a flywheel. The turning movement of the balance is transformed into vertical linear movement of the slide by means of a spindle. Since the flywheel can turn in both directions, the slider can go up and down. The Shooting of a rocker arm is carried out by activating a pedal and its corresponding set of levers, although the most modern models incorporate a system of electric shot.

Considering its structure, the most common type of rocker It’s of Swan neck, which can be from single acting (only allow the movement of the slider) or Double effect (independent and simultaneous movement of the table and the slider). The denomination Swan neck it comes from the oldest machines, whose frame featured an arch in that shape. Today that type of frame has fallen into disuse, but it retains its shape. “C”, with a throat (or neckline) of great amplitude that allows access to the work table from the front and the sides. Usually the rockers medium-high power incorporate two tension bars in the throat, in order to avoid breakage and to be able to use the machine in more severe jobs. Some models also feature cams with two connecting rods independent, capable of performing two successive punching/stamping phases per work cycle.

There are two subtypes of rockers swan neck:

As with many other presses, the parameters that distinguish the rockers become important when choosing a model, so these basic characteristics that vary widely must be taken into account.

Other parameters such as throat depth, the work table dimensions, of the slide and of the machine itself will give an idea of ​​the size and solidity of the pieces that each can support. rocker.

Widely used in the metalworking industry for both light and medium duty, the rocker It generally allows a single operation to be carried out in each stroke, it has low productivity and it is usually necessary to use other presses to complete a piece. Its most widespread use is to manufacture simple parts such as washers, accessories and small parts for household appliances.

What questions to ask yourself before buying a laser distance meter?

Combined laser level: how to use apps with this tool