What is a bench drill? A guide to getting to know it well 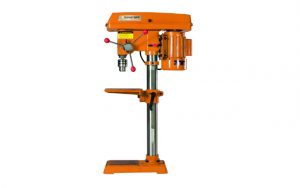 The large family of drills has a luxurious member, as robust as it is helpful: the drill press, also know as vertical drill or column, drill press or pedestal drill. Designed as a stationary machine that can be mounted on a work table or directly on the floor if its size is greater, it is the tool ideal for workshops, industries small or even home.

There are several advantages that a drill press versus a hand drill, including:

It is not by chance, then, that ahtool so useful already has several centuries of existence and in fact has been, like other presses, one of the first machines to be invented.

The bench drill evolved from hand tools used to drill into wood and other materials, such as the old and still present brace with its familiar “U” shape. Over time, the design was adapting to the growing demands of an industrialized world, giving rise to the first vertical drills which, as we can see in the following figure, went from the primitive models with pulleys and transmission shafts of the 19th century (figure on the left) to the models of the ’30s that already introduced an electric motor (figure on the right) .

Although today’s technology has incorporated highly sophisticated industrial drills, the modern version of the primitive drill of the figures above is a tool highly desired by both carpenters and mechanics and machining operators, since, in addition to the usual drilling, they allow tasks as numerous as reaming, threaded, redoubled, countersunk Y rectified.

Precisely in this article we are going to dedicate ourselves to dealing in more detail with the drill press and know its main characteristics. But let’s start at the beginning.

What is a bench drill and how does it work?

As we already mentioned in another article, drills stationary or machines drilling machines constitute a large group of tools powerful, some of which, due to their size and cost, are only applicable to the iindustry. This group includes the following types of drilling machines:

The drill press belongs to the first group of machines vertical drilling machines or column, which are the simplest and most economically accessible. They are characterized by the rotation of a vertical spindle in a fixed position that is supported by a “C” -shaped construction frame, just like rocker arms and sheet metal bending presses, for example. The handling of a drilling machine column is simple, because it consists of only two main movements.

This is how we have two classes of column drills:

The forward movement is carried out manually. They are designed for light work in wood, metal, plastic and similar materials, in which small holes must be drilled, a task that requires high speed and manual movements of advance. They can be short-column, in which case the base of these machines is mounted on a workbench (hence the name «drill press«) Or long column, so the base can be screwed to the floor. They can handle bits up to 15.5mm in diameter. The bit is inserted into the workpiece exclusively by hand, whereby the operator “feels” the action of the cutting tool as it passes through the workpiece. Hence the name “sensitive.”

They are very similar in design to sensitive drills, but of greater size, weight and power, which makes them ideal for drilling large holes and carrying out heavy machining operations on medium-sized parts, being able to achieve holes with a diameter of up to 50 mm. They have a long column, so all models are screwed to the floor by means of bolts and nuts. As they are equipped with a motorized insertion of the bit, they are not of the sensitive type, since a drive mechanism with gears changes the speeds and the advance of the spindle, allowing it to adapt to different types of parts. They can also have a mechanism to raise or lower the work table and even incorporate a cooling liquid tank integrated into the base.

Since this article is about bench drillsWe are going to focus exclusively on this type of sensitive machine, whose price range places it within the possibilities of both the professional and the amateur.

Main components of a bench drill

All drilling machines They have a series of common basic components, which are: a column, a base, a drilling head equipped with motor and accessories, a work table and a crank. Depending on the type of machine and its complexity, other components are added. Because it is the simplest, the drill press it has only the mentioned parts.

The figure below schematically represents these main components of a drill press. 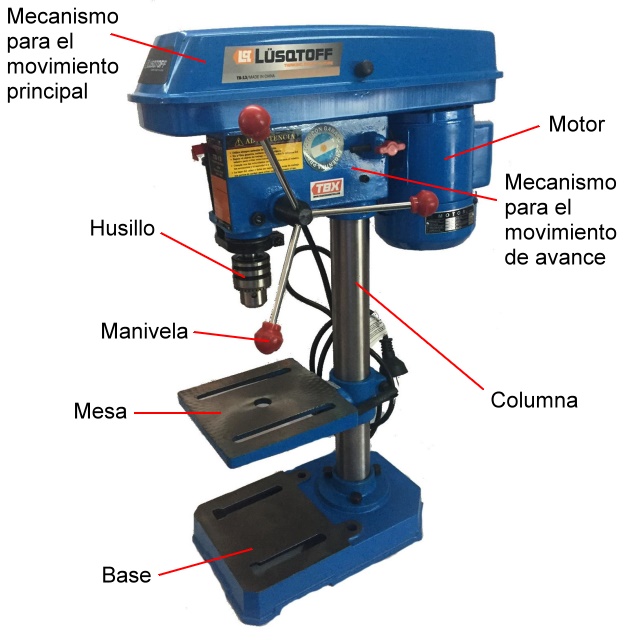 Parts of a bench drill

Base or base plate: supports the machine giving it stability and providing a rigid mount for the column. It is generally made of cast iron and can withstand vibrations. It is provided with holes to be able to screw it to the workbench or to the floor. It also contains grooves that allow you to fix a vice or clamps to hold the workpiece or, if necessary, to hold the workpiece itself.

Column: Constructed of cast steel, it is the main member of the machine that is erected from the base and on which other components are mounted, such as the table and the drilling head. It can be of the box, round or tubular type, although the latter design is the most common. The height of the column is what determines that the drill whether bench or floor.

Desk: It can be round or rectangular and is used to support the workpiece. Its surface is perpendicular to the column, and by means of a handle and rack assembly it can be raised, lowered or rotated around the column. On some models it is possible to tilt the table in both directions to drill holes at an angle. Most tables have T-slots for holding large dies, clamping devices or workpieces on them.

Drill head: It is mounted on the top side of the column and houses the mechanism to rotate the tool cutting edge and advance it towards the workpiece. This mechanism consists of a spindle and a drive motor that are connected by means of a V-belt and stepped pulleys at the top of the machine, as shown in the following figure. 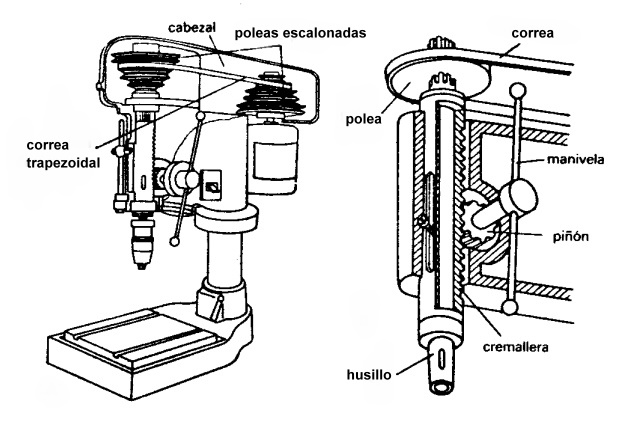 The belt transmits the movement of the motor to the shaft or spindle that holds and drives the tool cut and found inside a sleeve or shirt. Thus the spindle begins to rotate at speeds that vary between 50 and 2000 rpm. To produce the forward movement, a pinion connected to the crank that is rotated by the user meshes with a rack, moving the sleeve up and down and consequently driving the spindle in both directions on the workpiece.

In this video we can see a description of the components of a real drill and the demonstration of these movements.

The market offers a wide range of sensitive drills, both on the bench and standing. Knowing their capabilities can guide us on the type of work that each one can perform, so in the following graph we summarize the ranges of some characteristics offered by recognized manufacturers of sensitive drills. 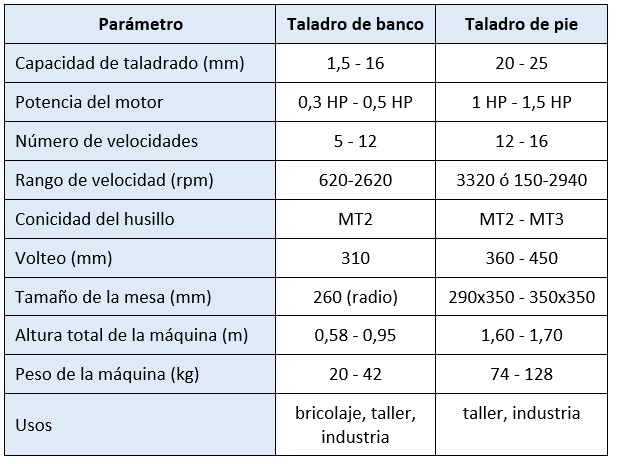 Tips for maintaining a bench drill

Like all machine tool, from the most economical to the most sophisticated model, a column drill requires maintenance that in the case of bench drills It is simple, but it is not dispensable. Let’s see what we must take into account mainly to ensure a long useful life of our tool.

The lubrication of a drill Stationary is important because of the heat and friction generated by moving parts. For this reason, we must consult the recommended lubrication methods in the manufacturer’s manual.

Generally speaking, we must first properly clean the drill after each use, paying particular attention to the slots and holes in the table and base, as well as the drive and feed mechanism components. For that, we must make sure to remove the chips from the belts, pulleys, the spindle and the sleeve, in order to avoid damage to both the moving parts and the precision adjustment. Afterwards, we will put a light coat of oil on all unpainted surfaces to prevent rust.

The operation of a column drill in adverse conditions requires special attention. For example, if the machine is used in a woodworking shop, which involves extremely dusty conditions, we must use it at the lowest speeds to avoid rapid abrasive wear on moving parts and to lubricate the machine more frequently.

In extremely cold conditions, it is a good idea to start the machine at a low speed and allow parts and lubricants to warm up before increasing speeds. The metal becomes very brittle in extreme cold, so we should not hit the machine with tools hard. For its part, extreme heat can cause the engine to overheat, so it is preferable to use the tool on intermittent on / off cycles to maintain a low engine temperature at all times.

Of course, to these measures we must add those relating to safety and personal protection in the use of electric machines. Many of these measures, of general application in various tools and which are also valid for bench drillsWe will find them in articles already published in On Machines and Tools.

What is a Laser Shaft Aligner?

10 things you need to know about pressure washers

How to sharpen tools?