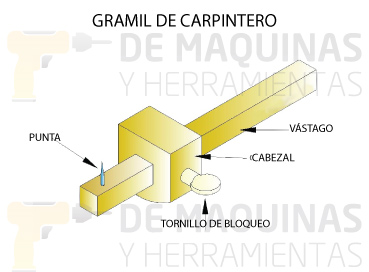 The gauges they are basically instruments to mark Parallel lines with great precision. They form two large groups and have different designs, depending on their application. Therefore, a priori, we distinguish two types:

Both one and the other type are widely used and, in turn, each type is made up of different kinds of gauges, so we are going to describe them separately.

The gauge Traditional for wood has been used for centuries and is still an essential tool for carpenters, both expert and novice. Its function is to draw parallel lines on the various sides of the wood, to then cut to the desired size.

Everything gauge of carpenter is made of wood or metal and consists essentially of a arm, stem or bar center containing a tip or metal device at one end and a head which can slide along the arm and which is provided with a screw or wing wrench for block it in the desired position.

Over time, this basic design was slightly modified to give rise to four types other than gauges from Carpenter. They are the following:

It is the traditional type of gauge, in which the arm may or may not have graduations and the metallic device at its end is generally a awl steel or, on some models, a pencil holder. The usual arm length is 200 mm, although 300 mm can be found for marking wide boards. 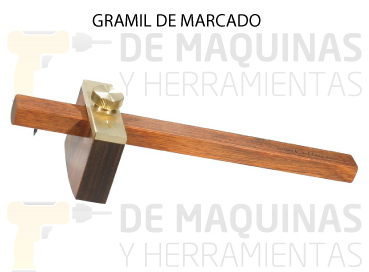 To make the marking, the head must be placed against an edge of the piece to be measured and unlocked. The arm is then slid forward or backward until the punch is in position to make a mark. The head is locked using the appropriate thumbscrew or wing wrench and the awl is lightly pressed into the wood for a quick mark or, if a pencil has been inserted, the head is gently slid along the edge to create a straight line for the mark. cut.

The design of these gauges is identical to the traditional one, only that instead of a punch they have a small knife held by a brass wedge. The blade has the advantage of being easy to remove and sharpen and is capable of marking the grain of the wood without penetrating or damaging the grain, as would be the case with a gauge traditional. The blade is normally rounded, but a pointed blade can be substituted for cutting thin materials such as veneers and other materials such as leather or cardboard. 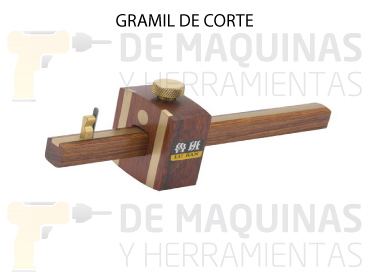 It is used to simultaneously mark both sides of a mortise or dowel. One of these tips is fixed, while the other is arranged on a sliding metal plate that is precisely adjusted by means of a thumb screw located at the end of the arm. Almost all the mortise gauges They are versatile, since they usually have a fixed tip on the other side of the arm to use them as traditional marking gauges.

What to take into account when choosing an Autogenous Welder?

What care and safety recommendations must be followed when using the jigsaw?