Plumbers, gas fitters and all those who work with pipes and tubes in general, from the simplest applications to industrial, oil or mining applications, for example, have various adjustable wrenches to facilitate their task.

The rise of adjustable wrenches, essential today for this type of work, began in the second half of the 19th century, when the North American inventor Daniel Stillson patented the tool named after him in 1869. Even today, the Stillson key is extremely popular, especially in the United States.

But it’s not the only one…

The history of the authentic «cajo key»

On the other side of the Atlantic, many European countries were still far from enjoying the advances of the Industrial Revolution, and one of them was the now thriving Sweden. In 1887, a pioneer named Johan P. Johansson decided not to emigrate to the United States like many of his fellow Swedes, and instead set up his own repair shop in a town near Stockholm, drawing on his previous experience as a laborer, machine fitter, and blacksmith master In time, his workshop would become famous throughout the world.

At that time, the workers had to carry with them many tools different to cover all imaginable dimensions of pipes, bolts and nuts. Johansson could not afford the expense of a full set of tools for himself and his employees, so he was forced to find a solution to this problem.

From his skillful imagination there arose an enormous tool which he called “the iron hand”, which Johansson wields in this photo.

It was about the first two-prong adjustable wrench designed especially for pipes, whose jaws allowed handling pipes and jackets of various dimensions. But the invention came with an extra addition: in addition to condense in a single piece a multiplicity of tools of different sizes, the «iron hand» could also be used as pipe clamping tool, a feature that made it superior to the single-branch keys used at the time, typically the one invented by Stillson.

The spout wrench Johansson’s, the first of his nearly 100 inventions, was the prototype of what is now known as a “Swedish wrench” or “Swedish pattern pipe wrench,” and received his patent on August 17, 1888, for which he has just to turn 130 years old.

What is the pipe wrench?

she’s witty tool It has two branches of different shape and construction:

The adjustment rod has a regulation nut which is used to close mobile jaws around the pipe or fastener (for example, a hex nut). 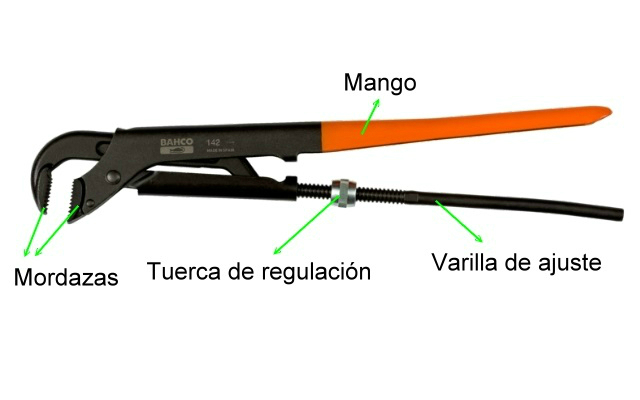 The adjustment nut is precisely what allows the jaws to be adjusted to the desired size by means of their upward or downward movement along the rod, and also enables the lock the key in the desired position.

The more pressure applied to the mango, the greater the clamping force of the jaws, to the point of being able to support the weight of an adult standing on the tool.

The jaws feature progressive serrations for a powerful and secure grip on the workpiece, and the jaw design itself accommodates not only various object shapes (round, square or hexagonal) but also tight spaces.

With the increased strength and safety features just noted, the spout wrench outperforms a Stillson wrench. Let’s see why.

First, let us consider the torque that can be transmitted by a spout wrench and a Stillson key for the same applied effort. 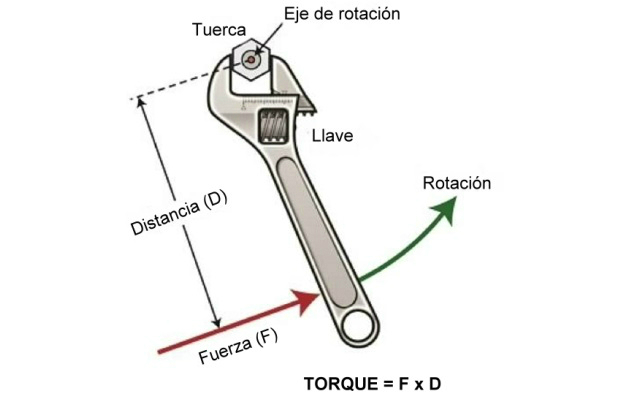 As the figure shows, torque is defined as the product of the force exerted by the user by a distance determined by the lever arm to transmit that force. Therefore, it follows from the torque formula that the greater that distance, the greater the transmitted torque. If we compare the total length of a spout wrench With a Stillson wrench of similar size and opening of the jaws, we will verify that the spout wrench is between 30-40% longer. 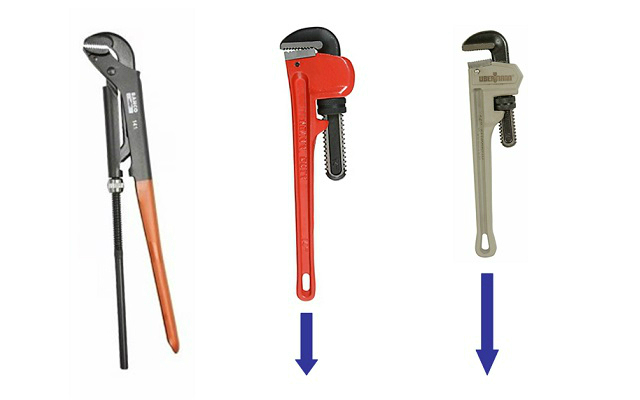 Clearly, its greater length is the reason for the greater magnitude of torque obtained when the same force is applied to both keys.

On the other hand, let us review the considerations of grip. The nut provided on the adjustment rod of the spout wrench It has a safety stop that not only prevents the nut from falling, but also provides a much more precise and safe jaw opening regulation mechanism.

The Stillson wrench does not have a safety stop for the nut, so in the aspect considered it cannot provide the same performance as the spout wrench.

And what about design? On the one hand, some well-known manufacturers offer spout wrenches whose jaws have a patented design of progressive toothing formed by teeth angled aggressively inwards. In addition to guaranteeing an optimal grip on pipes of all sizes, this tooth design prevents inadvertent slipping on the clamped piece.

On the other hand, and contrary to what might be assumed due to its length, a spout wrench is suitable for use in narrow and/or confined places. This is possible thanks to the various models currently offered by the trade, since we can find pieces with different head geometries, whose stylized jaws are oriented at 90 and 45 degrees, the latter, facilitating work in corners and corners.

Finally let us examine the construction details, since another question that we could ask ourselves is whether a tool so long it is heavy and difficult to maneuver. To this end, manufacturers have already addressed this questioning and today offer their spout wrenches with building designs managed to reduce its weight by 40% compared to the Stillson key and other used in plumbing and related tasks. The novelty is introduced by handles whose exterior is made of resistant folded steel sheet covered in plastic material to offer a soft, non-slip grip and, in some models, even ergonomic. The folded sheet metal core provides high resistance thanks to the steel alloy it presents, and is much lighter than a tool similar in size and material, but provided with a solid section handle.

As we already mentioned, there are several types of spout wrenches with different designs and sizes that adapt to all needs. Let’s examine the main ones, based on what the most recognized manufacturers offer. 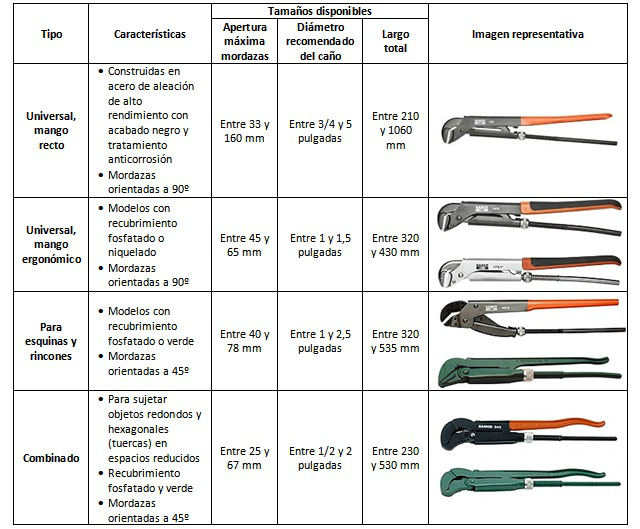 Uses of a pipe wrench

The exclusive opening and grip characteristics (the latter measured according to the recommended spout diameter) of these tools They make them extremely useful in an immense variety of applications in pipe installations, fastening and adjustment of various tubes, rods, and all kinds of circular section pieces. Here are just a few of those apps.

Although the prolific inventor Johansson would mark another fundamental milestone with the patenting in 1891-1892 of the most successful of the wrenches (precisely the one he carries in his pocket in the first image of this article), without a doubt his primitive “iron hand” laid the foundation for the high-quality ergonomic line that some manufacturers offer today. With their hollow steel sections and robust, specially hardened jaw geometry, these spout wrenches they are leaders in their field for the simple reason that, after 130 years, Johansson’s patent of August 17, 1888 still has no competition.

Video How are Stilson keys made?