What is a ratchet wrench and how many types are there? 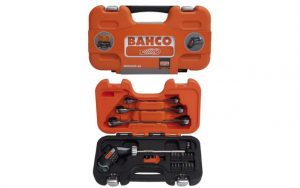 In the universe of hand tools, wrenches occupy a vast space due not only to the usefulness they provide, but also to the great diversity of different types that exist. However, when we talk about ratchet wrenches, ratchet wrenches or ratcheting wrenches the variety multiplies, as does the user’s confusion when it comes to distinguishing them.

First of all, we must be clear that what we call jack, rattle, ratchet, ratchet or ratchet is actually a mechanism, provided with a toothed wheel and a wedge or pawl attached to a spring (represented in the following figure) that can work in only one direction.

In this video we can see the basic operation of a ratchet mechanism.

The first manual key introduced by this mechanism was a tool swivel for keyholes patented in the United States about 150 years ago, which soon showed advantages over its peers, such as the brace, which made it extremely popular. The advantages of this new ratchet wrench or rattle They were mainly based on the fact that each time the limit of the turning arc was reached, the user did not need to remove them from the nut or screw and relocate them, as in the case of adjustable wrenches or open-end wrenches used at the time. On the contrary, although the ratchet wrenches repeatedly turned in both directions, the nut or bolt rotated in only one direction, which was less complicated, saved time, and was particularly applicable in confined places.

By allowing movement in only one direction, it might be thought that the ratchet wrenches they only serve to tighten (or loosen) a nut or bolt. But not. Thanks to the addition of two pawls and a selector lever for the direction of rotation, the active slot can be changed to one that acts in the opposite direction, and in this way the tool can tighten in one direction and loosen in the other direction just by moving the lever shown in this figure. 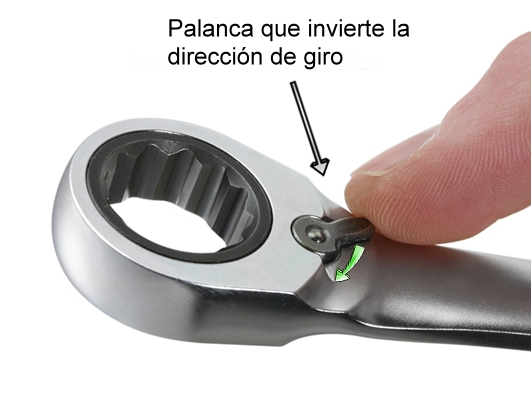 So let’s see in practice what this ingenious design consists of through the animation shown in the following video.

Now that we understand how a ratchet wrench, ratchet or rattle, let us know what are the different kinds of keys available in the trade, both manual and motorized, that incorporate said mechanism to be used with or without the corresponding keyholes.

When we introduced combination keys a while ago, we mentioned that one of the many types of these manual keys they may consist of a flat or angled jaw at one end and a flat or angled ratchet jaw at the other. Although some call star key To this last extreme, we should not confuse the term with the ratchet, since although they are similar in appearance, the star wrench lacks the ratchet mechanism and, therefore, the lever that exchanges the direction of rotation of the tool.

Therefore, some of the types of combination wrench that incorporate an end provided with rattle they can be the ones shown in the following figure, where, from top to bottom, we see: a flat-mouth wrench with a flat ratchet at the ends, one identical to this but extra-short, and a flat-mouth wrench with an angled and articulated ratchet at the extremes, where the three types come in models that cover metric or imperial units. 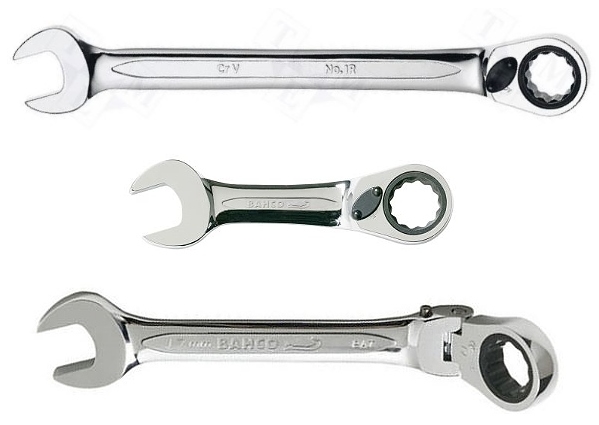 Are keys they can be purchased individually, according to the size required by the user, or in sets offered by key type and in different sizes, for example: a set of 6 extra-short keys between 8 and 17 mm, or a set of 6 or 8 wrenches with an angled ratchet at one end, and with measurements in millimeters or inches.

Two of the typical examples of this type of key are shown in the following figure. 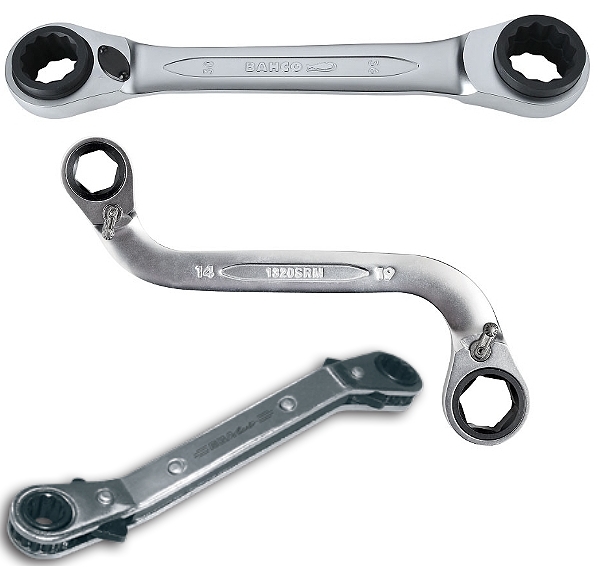 They are extremely versatile models that can be adapted to four different sizes to be used with or without keyholes, and are also sold in sets, both in metric and imperial sizes. The straight key can also have a variant with angled and/or articulated ends. The “S” design is very practical when it comes to working in confined spaces and with little freedom of movement, as we can see in the video below.

However, perhaps the most popular type of tool that carries the ratchet mechanism are the ratchet wrenches, which are a variant of torque wrenches (or torque wrenches) and only work with keyholes. This means that they come with a male adapter for the most common keyhole sockets, ie 3/8, 1/4, 1/2 and 3/4 inch.

Clearly this means an advantage, since with a single wrench we can use an infinity of sizes of keyhole that only respond to the four most used inserts. Therefore, the most common presentation of a ratchet is in sets of any of these four sockets, for example, 1/4 inch, with 10-20 keyholes of different types and sizes, as well as various accessories.

precisely one tool of this model was the one that in the 19th century used for the first time the ratchet mechanism that we mentioned at the beginning of this note. The following video shows us how the today so useful manual ratchet wrenches are made.

As expected, mechanical technology could not be left out of the use of the mechanism of ratchet and, therefore, motorized ratchets are another of the subtleties offered by the trade, especially aimed at the professional user and which have great application in mechanical and machinery workshops in general.

Thus, pneumatic ratchets (top image of the figure below) have gained ground thanks to their excellent combination of speed and torque. Although less powerful, they are similar in appearance to straight linear design air impact wrenches, and many feature a speed control system to ensure precise operation and a rubber grip for comfortable use. 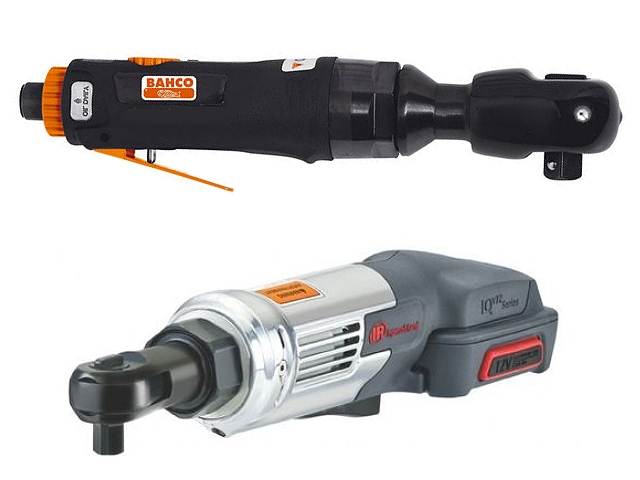 For their part, some manufacturers also offer cordless ratchets battery-powered (lower image of the figure above) with features similar to pneumatic models and equipped with a progressive trigger that allows easy starting and precise speed control.

Beyond the keys, the mechanism of ratchet or rattle It also extends to other hand tools, always giving them the same advantage, that is, they allow you to tighten or loosen screws/nuts and other elements without having to lift the tool of the element nor the hand of the tool.

For example, mechanics and industrial maintenance technicians will also be able to make use of the practical tap wrenches or ratchet banders, which are “T” handles used to turn taps to form internal threads. Thanks to their ratcheting device, they can be easily used in tight and hard-to-reach areas, for example inside an engine.

Other tool that many users will find useful are the ratchet screwdrivers, equipped with a collar integrated in the handle that makes it possible to change direction easily. They come individually or in sets, with various tips and in different handle designs (straight, “T”, pistol-type or extra-short) and even, in some models, provided with LED light.

Lastly, electricians as well as electronic and telephone technicians avid for wire strippers will surely appreciate the ratchet pliers to carry out the pressing of cables with the best quality. There are models for different types of terminals (tubular, telephone, insulated, non-insulated, etc.) and can be used for cables with sections between 0.5 and 6 mm2, where the locking mechanism ratchet automatically releases the cable once the crimping operation is complete. 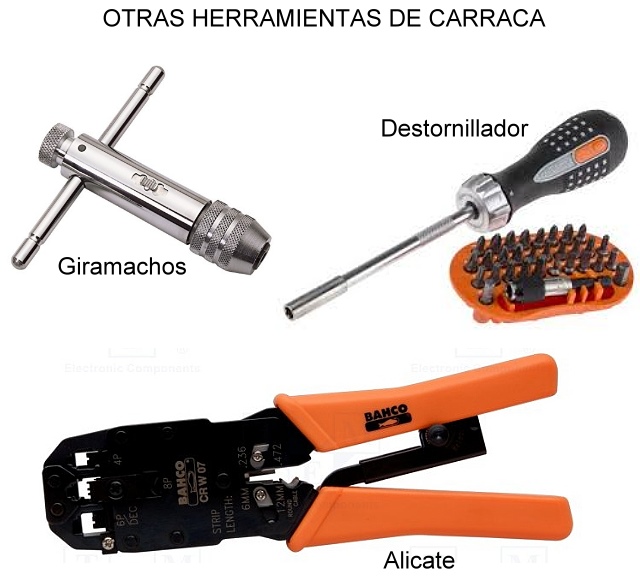 These are just a few examples that, as we have just seen, enhance the enormous utility of the ratchet and the advantages it provides, although by far the best-known tool of this type is always useful and reliable ratchet or ratchet wrench.

How are Construction Plumb bobs used?