What is a sander, what is its origin and how many types are there? 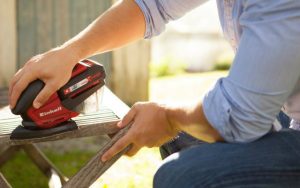 The work of sanding, mainly from wood, but also from other materials such as plastic, metal, glass or ceramics, it has never been much favored, as it is considered a tedious, time-consuming activity and covers everything around the workpiece with dust. , not to mention the operator himself.

More than one hobbyist has tackled this arduous task with a wooden block wrapped in sandpaper. However, carpenters and other professionals in the lumber, automotive, or construction industries know that there is a tool practical to obtain perfectly sanded surfaces in a simple, fast, clean and effortless way: the sander.

The first sanders appeared back in 1820, they were stationary machines that worked with a mechanism band or drum and they were used only in the professional or industrial field. Possibly that would seal the fate of the sanders stationary, of which, as we will see later, only a few models have reached small and medium-sized companies.

It took more than a century for the first portable electric sander. It was a belt-type machine built from die-cast aluminum and weighed an impressive 6kg. This characteristic made it unsuitable for the home, so its use was also limited to professionals, even though other lighter models were developed very soon, and in the 1930s the first dust collection system was patented.

It was only in the second half of the last century that the advance began to gain notoriety. The orbital sander was introduced, capable of achieving a finer finish and reaching narrow places, which excited the DIY enthusiasts who had already been imposing their requirements in a world where the concept of the “Do it yourself” it conquered followers.

This is how the old versions of belt sanders also became portable and later the eccentric sanders, which were initially pneumatic, but then electric versions were introduced. Later, during the ’90s another model emerged for fine and delicate work in corners: the delta sander.

As it could not be missing in this race, at the end of the ’80s the first cordless sanders. The climb continues to this day, although the most modern so far, the multiple sander, has been in the market for almost 20 years.

This brief introduction tells us about various kinds of sander, as well as the different ways in which they receive energy to function. How to know them all? Let’s see it more clearly in the following table.

Although the classifications are various, the main category that divides sanders is by size, that is, laptops Y stationary.

Generally, the only sanders that are marketed both in their portable and stationary versions are the band.

The others are much more frequent in one version or another. For example, sanders orbitals, eccentric, delta Y multiple are exclusively laptops. The rest are sanders stationary with the following trends: band, Y band and disco (Bank), disk Y oscillating spindle (pedestal or bench), drum, edge Y broadband (pedestal or industrial). 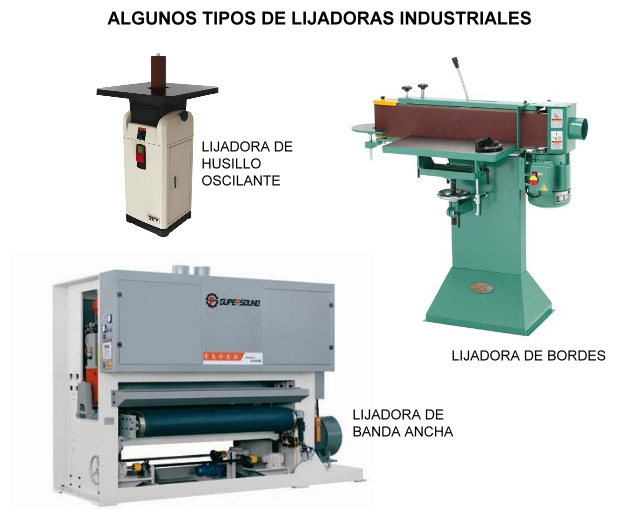 The industrial sanders (many with CNC technology) and pedestal ones cover a different application and market that is beyond the scope of this article. Therefore, we are going to focus specifically on the portable and bench models, which are the ones that are within the reach of both the professional and the hobbyist, whether they are stored in a briefcase or installed in a workshop.

All sanders that we will see next and that are marketed by recognized manufacturers come in models that:

For being the first sanders portable, its benefits have been numerous. They are provided with a rectangular base to which a quarter (or half, depending on the model) of 9 × 11-inch sandpaper can be attached. To create sanding action, this base rapidly vibrates in small circles or orbits approximately 2mm in diameter, and its rectangular design allows the tool to access straight edges and corners. 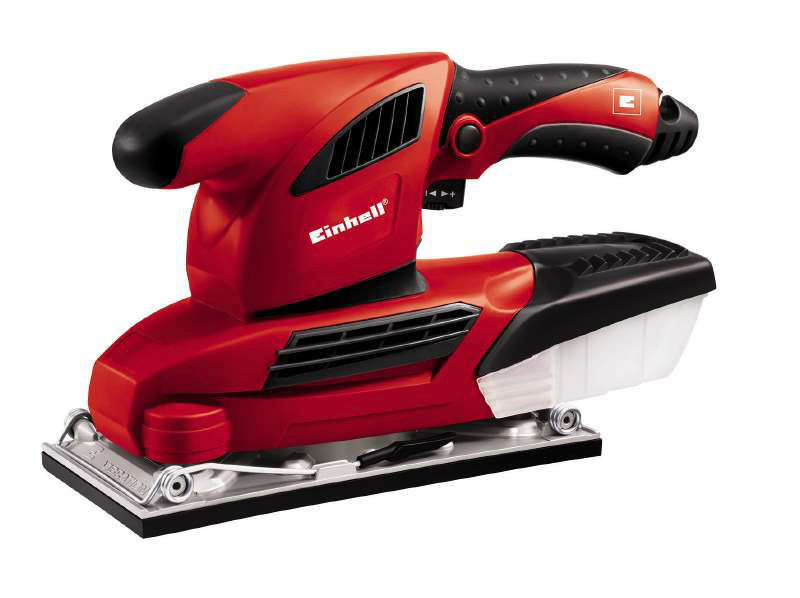 They are not aggressive sanding machines, so they do not remove large amounts of chip and generally leave less visible marks when compared to belt sanders or hand sanding perpendicular to the grain of the wood.

Its most recommended uses are in places inaccessible by others sanders and when only light sanding is required. They are perfect for preparing a surface for painting or sealing, or for removing a coat of paint. They are also useful when a hardwood floor is being installed and sanding is needed along baseboards and in corners.

Instead of a rectangular base, these machines feature a circular sanding surface, typically 125mm diameter. They also fall within the group of orbital sanders, but they work differently from the previous ones, since they describe two movements at the same time: one is orbital and the other is eccentric, which allows them to obtain an almost perfect sanding, since the marks left by the orbit are later erased by the eccentric movement. In this way, the direction of the sanding down the grain of the wood is irrelevant. 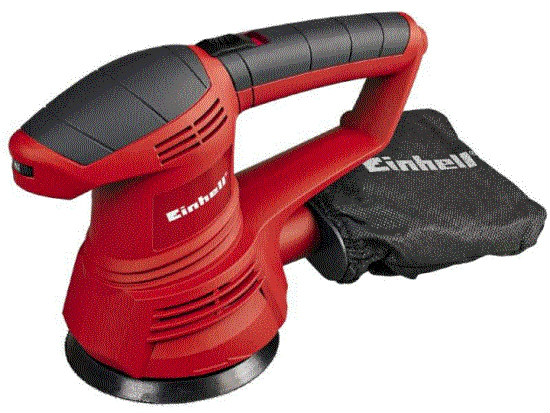 This combination of movements also achieves greater material removal which, however, if left unchecked, could result in material damage. For this, modern machines have variable speed governors that can achieve a less aggressive sanding.

Precisely due to their circular base, these machines cannot access straight corners or edges, but they are ideal for curved parts. In addition, its great power of removal against orbital sanders allows them to be used on large jobs such as finishing a hardwood floor, and small jobs such as sanding kitchen cabinets, for example.

If there are difficult and narrow places to which a orbital sander can not arrive, then the delta sanders They are the electric alternative to manual sanding. They are manufactured in sleek models similar to a multi-purpose power tool and are provided with a triangular base that accepts sandpaper of that design. It is used exclusively to work on fine details, such as corners and small corners, for example, door frames. 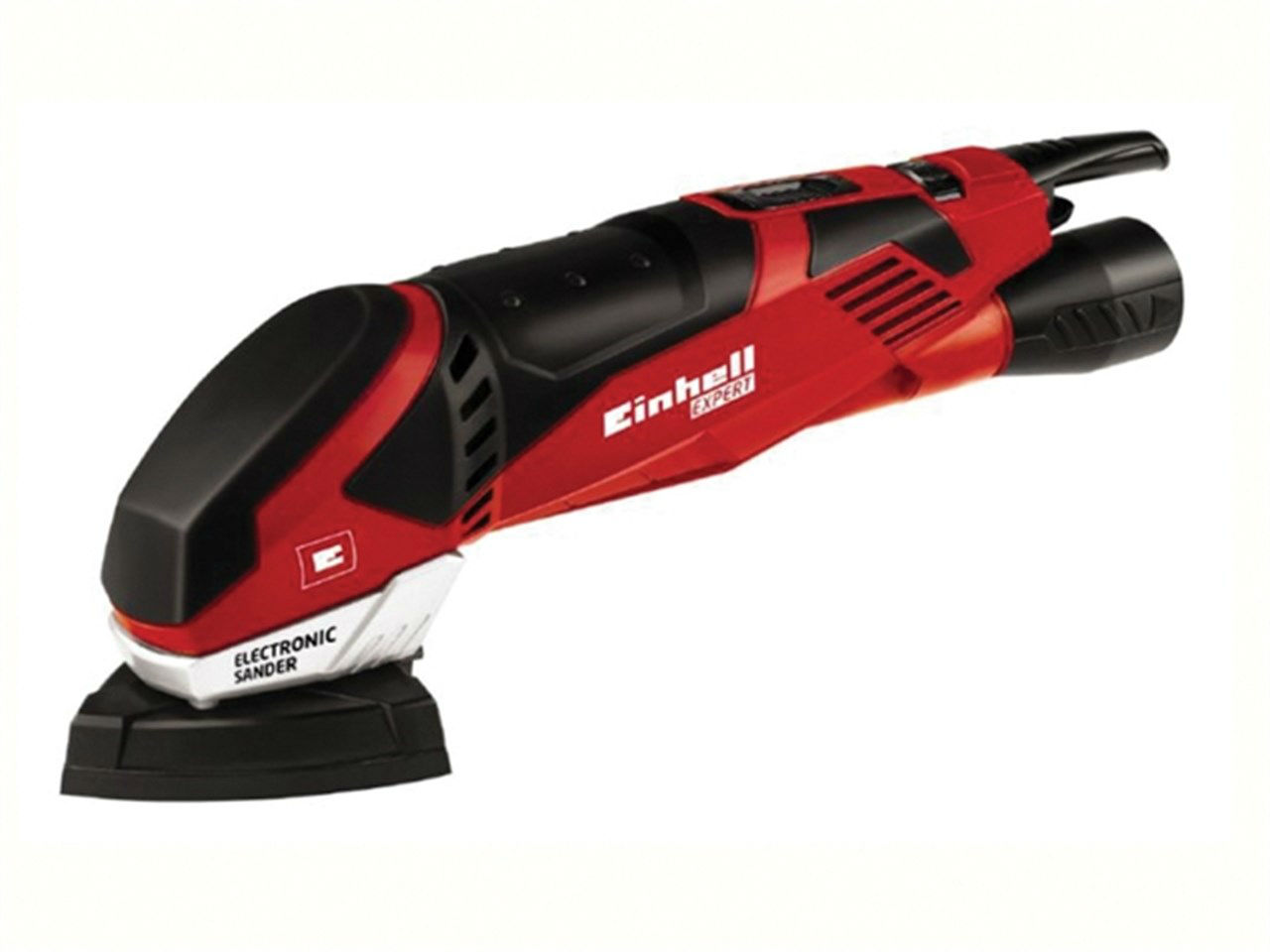 They are lightweight, use very little sandpaper, and have good dust collection. Many operators also use them as a saw thanks to their easily removable accessories, which makes them very versatile in a workshop.

Like all tool for various uses, these sanders They can perform different types of sanding because they combine functions that we have seen so far in a single unit. They are available in corded and wireless versions, and are provided with a base that resembles a clothes iron, with a triangular tip for fine finishing in hard-to-reach corners, corners and places, and a rectangular / square section for sanding in large corners and parallel to straight edges.

They are highly sought after by DIY enthusiasts, and the cordless version (which we see in the next video) incorporates a lithium-ion battery that is interchangeable, meaning it can be disassembled and installed in other cordless tools from the same manufacturer.

Some models of multiple sanders also include a circular base to use as eccentric sander, and other models (those of the “mouse” or “mouse” type) have a very small size and power that allow the tool It can be held with one hand, just like our computer mouse, for use in very fine details and / or very confined places.

In a previous article we described in detail the belt sanders, as well as its various types and classifications. In this opportunity, therefore, we will only add that, since they have a mechanism in which the sandpaper belt travels through the front and rear rollers following the same principle as the tread of a bulldozer, the Belt sanders have a powerful abrasive capacity that makes them well suited for the removal of large amounts of material from large flat surfaces.

That is why, being one of the first sanders invented, they not only remain popular for coarse sanding work, but are also the most widely available type of sander: Portable, Bench, Pedestal, Industrial, Electric, Cordless, Pneumatic, Narrow Belt and Belt wide. 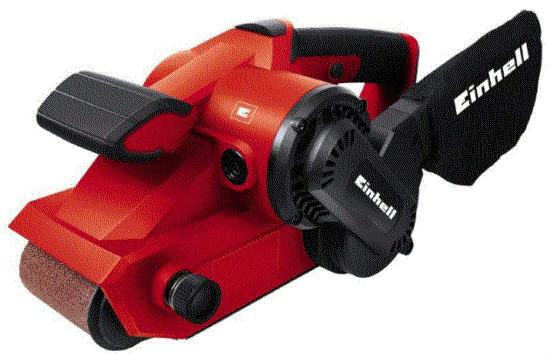 Precisely a variant of belt sander It is a compact version “2 in 1” for bench that combines the functions of sanding by means of belt and disc, very useful in carpentry workshops.

Typically 6-10 inches in diameter, the disc sander is ideal for sanding square and curved ends on narrow boards. In addition, it is equipped with a tilting work table that supports a miter gauge so that the disc can be used for precision sanding of square and angular parts. For its part, belt sander It has a large, flat surface, with which long and wide planks can be sanded. On most models, the band is adjustable so that it can be positioned horizontally, vertically, or at an angle. 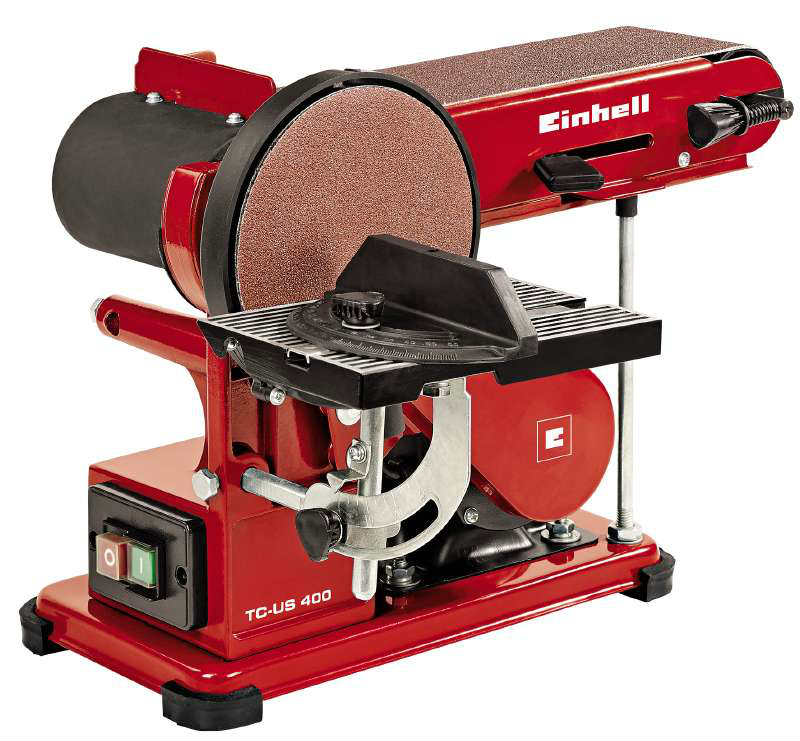 The advantage of combining two functions in one also makes it possible to use different sandpaper: one for preparatory work (coarse or low number) and the other for finishing work (fine or high number). This ensures extremely versatile use and great time savings by eliminating the need to change sandpaper.

Those that we have just presented are just one part of the vast catalog of sanders offered by the trade, and a priori it would seem that the variety can overwhelm the potential buyer of a machine that must be adapted to its needs, but that it is not clear which one to choose.

We will return to this in future articles, but for the moment, in order to summarize and see graphically the concepts presented here, we can consult the following guide table. 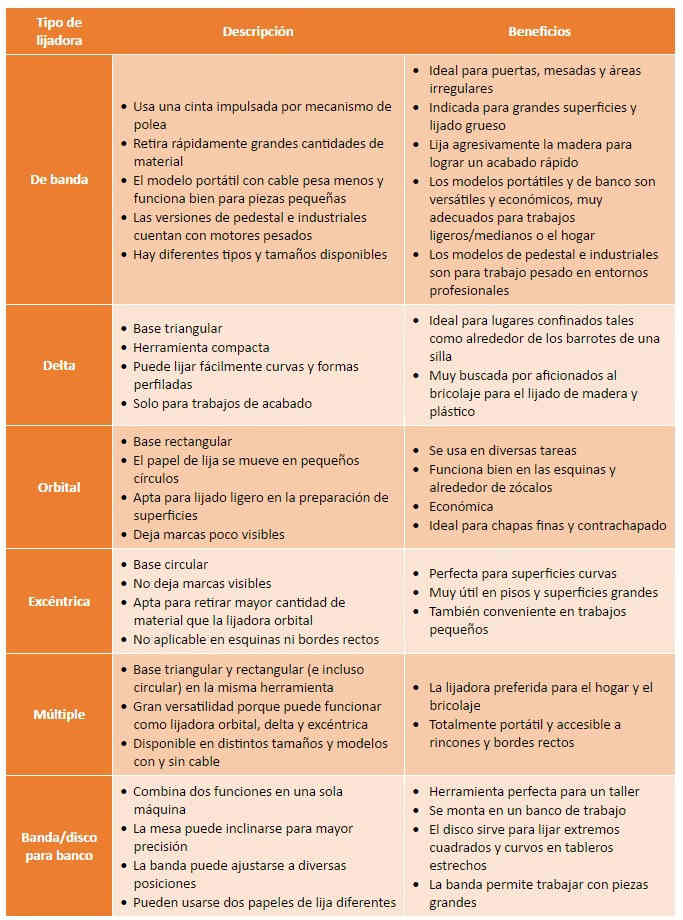 Introduction to the Wall Scanner

How to use an Axe?