What is an LED lamp like and how many types are there? 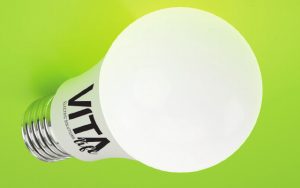 Since the invention of the first prototype of electric lamp arc -invented by Humphry Davy- and the subsequent appearance of the incandescent filament electric lamp -commercially developed by Thomas Edison-, the electric lighting It evolved motivated by the search for a way to generate more radiation within the visible spectrum using as little energy as possible. the maximum point reached by this technology is the LED lamp, a relatively recent invention.

A primitive model of an incandescent lamp, with several carbonized bamboo filaments. Note that the filaments are not double spirals but simple wires.

The first prototypes of electric lamps They began to appear at the beginning of the 19th century, although these models were rather material for the cabinets of curiosities that were in style at that time in the houses of upper-class families; the lamps had an extremely short lifespan (just a few minutes) and lacked obvious practical use.

Edison was the promoter of this technology; his first patent for practical use was implemented on the steamboat Columbia, in 1880. It was a carbonized bamboo filament lamp powered by a dynamo, and the projected light was enough to illuminate the waters in front of the boat. Weeks later, the United States Electric Lighting Company was founded, the first electric company, which installed its first lamps in a warehouse in New York City. 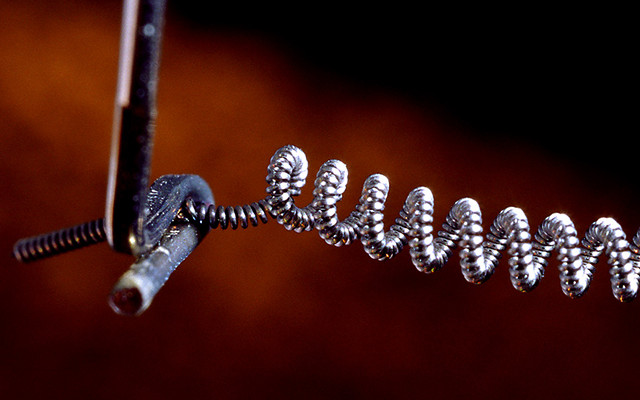 Detail of the double spiral tungsten filament of a modern incandescent lamp.

A few years later, in 1904, Sándor Just and Franjo Hanaman obtained a Hungarian patent for a lamp with a tungsten filament and an inert gas atmosphere (in contrast to the vacuum tubes used until then). These lamps were more durable and achieved a greater brightness than the carbon filaments used until then. The race for efficiency had begun. 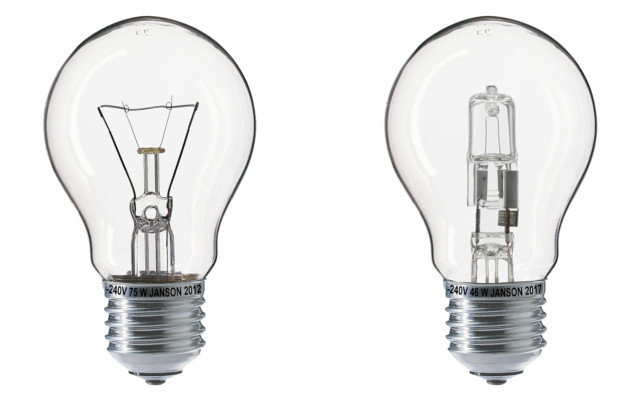 On the left we can see a modern incandescent lamp, with its filament in the form of a double spiral. On the right, a halogen lamp.

In 1917 the spiral filament was invented, which exposed a greater surface area and, therefore, managed to improve the brightness of the lamps without greatly affecting consumption. The double spiral filament lamp was launched on the market in 1921, further increasing efficiency.

In 1959, General Electric patented and launched an innovation in the incandescent lamps, call halogen lamp: in these, the tungsten filament is enclosed in an ampoule that contains a mixture of inert gas (xenon in most cases) and a halogen such as iodine or bromine. This mixture allows a tungsten redeposition cycle to form in the filament, thus extending the life of the lamp. Although it does not represent a notable increase in energy efficiency, it allows to manufacture more durable lamps. 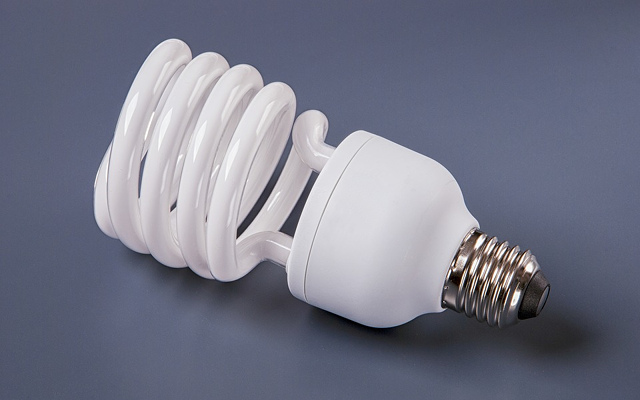 The precursors to fluorescent lamps Modern models date back to 1901, when Hewitt patented a mercury vapor discharge model that operated with low voltage (the same one needed to light existing incandescent lamps).

A few years later the first neon lamps that, although they were used almost exclusively for the street advertising industry, they represented an advance in the technology necessary to achieve a light system bright, simple and efficient enough to compete with incandescents.

In 1938, four models of what we know today as fluorescent tubes. These first lamps, as now, required the use of a ballast. By 1951, fluorescent lamps (more energy efficient) were outselling incandescent lamps. 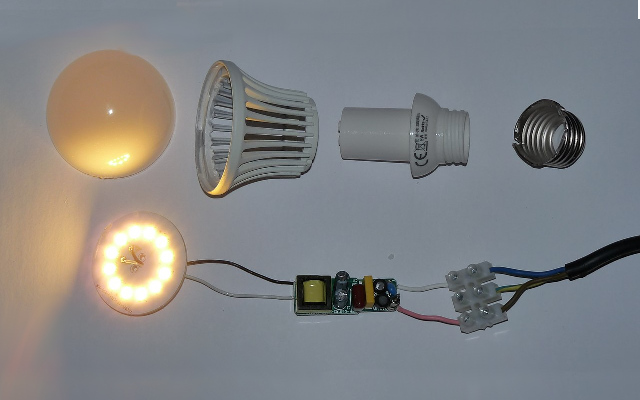 Exploded view of a LED lamp. Note that there are no filaments or gas bulbs; everything in the lamp is solid state.

The first LED lamp It appeared in the 60s and consisted of a bulb prepared to work with low voltage, but it only emitted light in the red frequency of the visible spectrum. Already in the first half of the 90s the first Led capable of emitting light in the blue frequency of the spectrum, something that opened the doors for the manufacture of the LED lamp a decade later, using a small phosphor coating to convert some of the blue light into re-emissions of red and blue light, which mixed together produce an acceptable white light.

In 2009, the LED lamp. With the reduction of production costs it soon gained popularity and today its efficiency is vastly superior to that of incandescent, halogen and fluorescent lamps. Their useful life is also much longer: they can last for years and even lustrums.

What advantages does the LED lamp offer us compared to other technologies?

A LED lamp it is much more efficient than its fluorescent, halogen and incandescent predecessors. For example, a 60W incandescent lamp, in terms of lumens, is roughly equivalent to a 43W halogen, a 14W fluorescent, and a 9W LED.

An incandescent lamp with the same characteristics would only last about 1000 hours.

Incandescent lamps lose much of the energy they consume in the form of heat. The same happens with halogens.

Fluorescent lamps are more efficient, but nevertheless, they end up radiating a lot of heat. The LED lampOn the other hand, it can stay cool or barely warm even after hours of being turned on. This is because a large part of the energy you consume is converted into light; only a small part is dissipated as heat (mainly in rectifier circuits).

What types of LED lamps are there?

The different models of LED lamp It can be classified according to its use requirement or the type of fastening used. 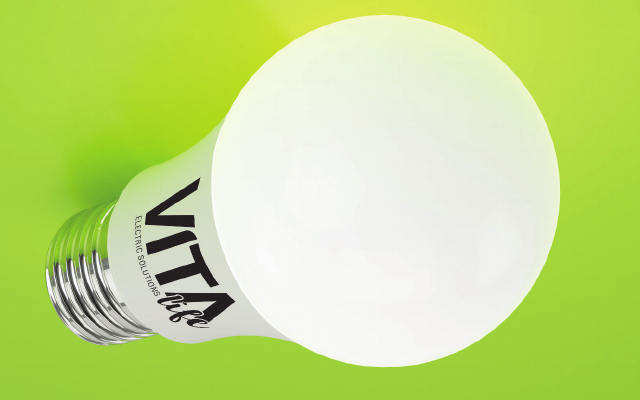 This type of LED lamp it was intended as a replacement for the outdated incandescent lamps and the newer fluorescent and halogen lamps; Their fixing system by means of Edison E27 thread and their bulb shape allow them to be used directly on existing fixtures and spots, without the need to install transformers or other additional circuits. 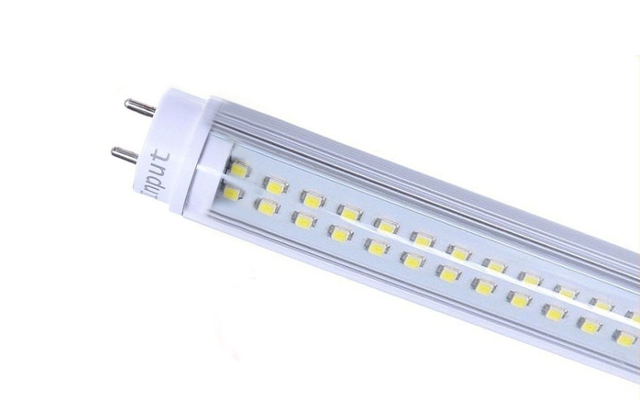 They are called general purpose because they emit a white light that covers most of the visible light spectrum, so they do not emit monochromatic light and are suitable for practically any case in which standard lighting is required. 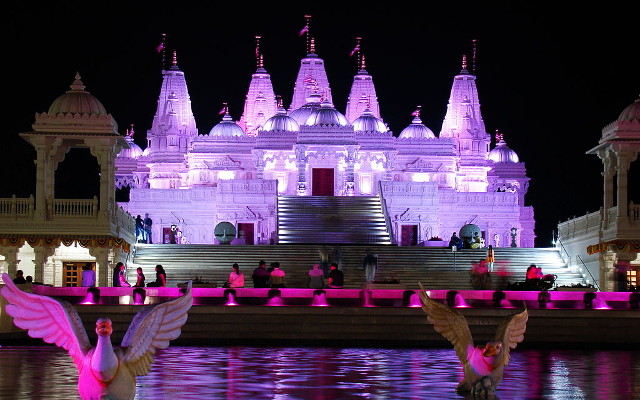 This scene is illuminated by different LED lamps with RGB dimmers, which allow them to achieve almost any color.

There are different models of LED lamp for specific uses: some are made up of small arrays of red, green and blue LEDs that, with the help of an electronic dimmer, allow them to emit light of almost any color in the visible spectrum using the RGB mixing technique.

Other models emit light in the infrared or ultraviolet spectrum, and are used to remotely control devices or detect counterfeit bills or the presence of organic compounds (such as urine, blood, detergents, etc.).

Some led lamps they are designed to function as strobe lights; These are especially useful in industry, to control the position of a disk or to photograph the finished or semi-finished products that circulate on a conveyor belt, to detect the presence of undesirable objects in fractions of a second. 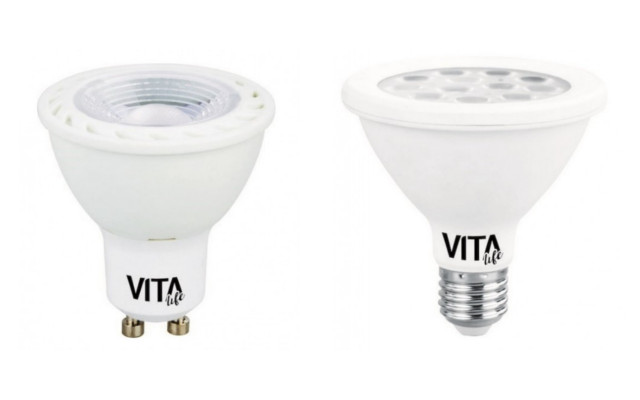 On the left we see an LED lamp with a GU10 type bipin fixture. On the right, a similar Edison E27 threaded lamp (the one that can be found in any home lamp holder).

Fixture of lamps is another possible classification criterion. The first LED lamp It was manufactured with an Edison E27 thread, in order to facilitate the transition from the old technologies (incandescent, halogen and fluorescent).

There are also other threads and systems: the E40 thread that is used for public lighting lamps (those for mixing, mercury vapor, sodium, etc.); the bagel Mignon or E14, used for chandeliers; the GU10 bipin fixing, frequently used in desk lamps or spots for halogen lamps.

Grooving machine: introduction to get to know it well and how to use it

10 things you need to know about accessories for measuring tools