What is an Odometer or Topometer? 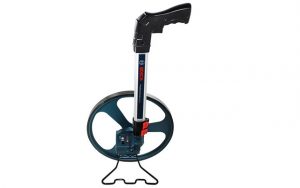 The first thing we associate with odometer is he odometer of our vehicle and therefore we think that it is a device invented in the twentieth century. However the odometer or topometer It is so old that, for some researchers, its origins date back to pre-Christian times. To know how to choose it, we have made this note.

By its Greek etymology, odometer it means “Measure distances traveled” and that was mainly the use attributed to this instrument in ancient times, both in the civil and military fields, long before finding application in the Automotive industry, in bikes, in modern fitness equipment (for example, treadmills), in assistive devices for people with motor problems (for example, Wheelchair) , in surveying, topography and in any other activity in which the accurate measurement of a distance when covered, even walking, on flat surfaces.

The foundation on which a odometer, which depends on the movement of another millenary instrument such as the wheel, it is very simple and to understand it, we ourselves can build a simple topometer. It is only enough to use a circular piece to which we have previously measured the circumference, attached to a rod or cane, so that it can rotate freely on the ground, similar to what we see in the figure below.

Then we place a nail on the edge of the “wheel” and a plastic or metal wedge or tab on the shaft, so that when the wheel completes one turn, the nail hits the wedge producing a clicking noise. Thus, knowing the wheel circumference measurement and the number of clicks that we hear along a certain route with the device, we will have a good idea of ​​the distance that we traveled with it.

With this principle and the addition of gears, the mechanical odometers, which in turn today are being replaced by the digital odometers. Both of them retain the same operating mechanism, based on a wheel whose rotation activates a series of gears that allow calculating the distance traveled.

Let’s see the types of topometers most common, starting with the one we know the most.

In reality, vehicles (from motorcycles to trucks and large buses) have two instruments in a single sphere: the speedometer and the odometer or odometer, which work coupled. 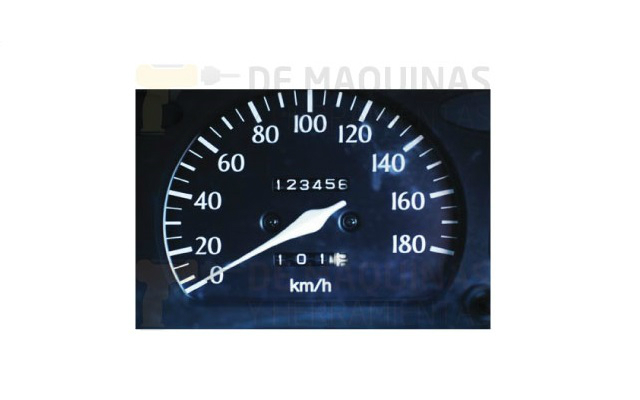 To understand how this set works let’s look at the schematic representation of speedometer + odometer which shows the following figure. 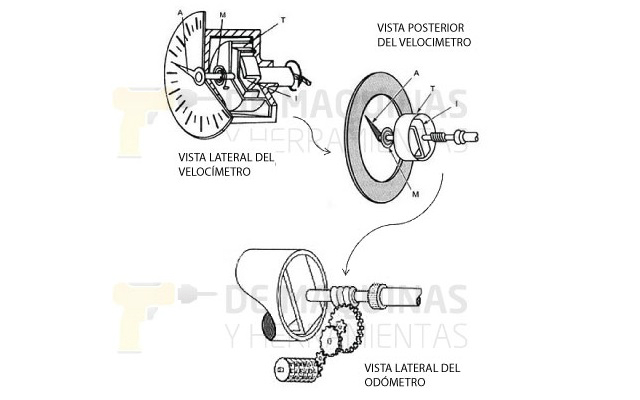 The gearbox of the vehicle transmits the movement of the speedometer through a flexible cable attached to the rear of the instrument panel. This movement rotates the permanent magnet “I” found inside the drum “T”, to which the needle “A”, which moves along the graduated scale of the speedometer dial, while the spring “M” opposes the movement of the drum “T”. It is clear that the higher the speed of the vehicle, the faster the magnet will rotate, the greater the drag of the drum produced by the magnetic field of the magnet, and therefore the greater the displacement of the needle.

Since this mechanism only measures the speed, the drum drive system is used to provide a gear series that receive the movement transmitted by the flexible cable or gut of the speedometer through a endless and they relay it to another drum. This drum, in turn, moves graduated wheels geared together, successively marking the distance traveled every 100 meters, one kilometer, tens, hundreds and thousands of kilometers, as shown in the following figure. 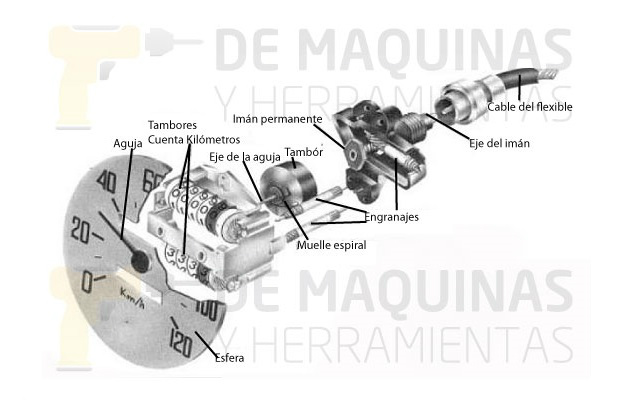 Parts of a speedometer

A new drum activates a tripmeter, which can be reset by the driver.

In the most modern vehicles, this system of magnetic drum is being replaced by a optical sensor speed. In this case, the movement transmitted from the gearbox through the flexible cable is received by a perforated wheel in contact with the optical sensor, as we see in the figure below. 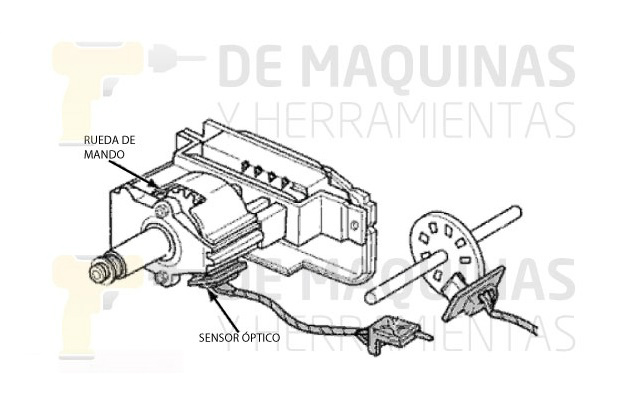 Every time it matches each slit of the perforated wheel, this sensor projects its light onto a phototransmitter and the signal is sent to a electronic circuit, which makes it convenient to direct the movement of the speedometer needle.

These odometers, also known as measuring wheelsThey do not differ much from the home example we mentioned at the beginning, except that they use gears. The most common have a single wheel, but there are also two-wheel ones. Some work on the mechanical principle, such as vehicle odometer. Others are electronic and have a wide screen Reading. Its function in surveying, geology, topography and even agriculture is complemented by measuring tapes and distance meters, tachymeters, pedometers (or step meters), rangefinders (they measure inclined distances) and even more sophisticated devices such as levels, theodolites and stations. 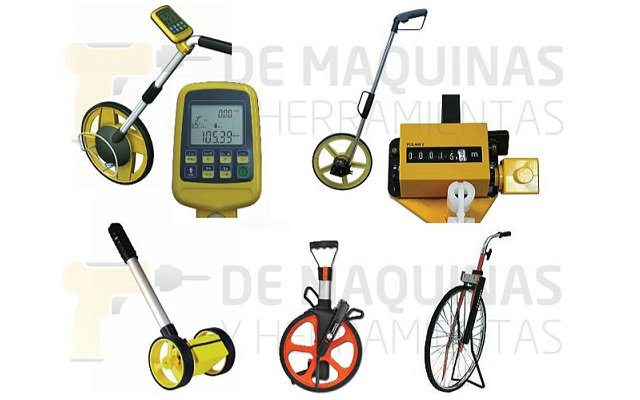 The advantage of manual odometers is that they are inexpensive, lightweight instruments, easy to handle and transport (they are generally foldable), they can count forward and backward distances in ranges from 0 to 9,999.99 meters, they work perfectly to measure curved lengths and they can even measure areas with a certain precision.

To use the topometers manuals on the measuring a distance between two pointsWe simply have to fix the wheel on the starting point, press the start button and walk to the end point. The distance traveled will appear directly on the marker or electronic display.

For measure square or rectangular areas, we carry out the previous procedure twice, first on one side of the surface and then on the other, and we multiply the distances obtained by two. In case of triangular areas, we must take into account the formula for the area of ​​a triangle (base x height / 2), therefore, we measure the length of the triangle’s base and the distance from the base to its highest point (height). Finally, we apply the formula to obtain the area.

The uneven surfaces They can be divided into a series of squares, rectangles, or triangles and the area for each section is calculated. Then, adding the areas of all the sections, we will obtain the total area.

If we wish to express the areas measured in hectares, we simply divide these by 10,000.

The application of manual odometers It ranges from fields, farmlands, forests and meadows to measurements in machine or warehouse sheds, the laying of cables, pipes, rails, hoses and the construction of pavements. Those with solid construction, such as steel, can be used in adverse weather conditions in the rain or on muddy soils, so, as we can see, their versatility is extremely wide.

Before choosing an odometer, consult our experts’ recommendations in this article and get the best from within budget.

What to consider when choosing a plasma cutting table? Part IV