What is an optical pyrometer and what is it used for? 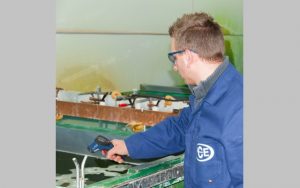 The optical pyrometer is an instrument used to measure the temperature of an object remotely and without physical contact with it, taking advantage of the physical principles of the spectrum of thermal radiation emitted by any hot body.

This instrument has various industrial uses, mainly in the iron and steel industry, foundries, boilermaking and blacksmithing. It should not be confused with optical thermometers, which use a similar working principle, but which have greater precision although they are limited to working with low and medium temperatures.

Optical pyrometer: a bit of history

The optical pyrometer It has little more than a century of history, and is considered a classical instrument, although it still has use in the industry, despite the fact that there are more precise digital measuring instruments. 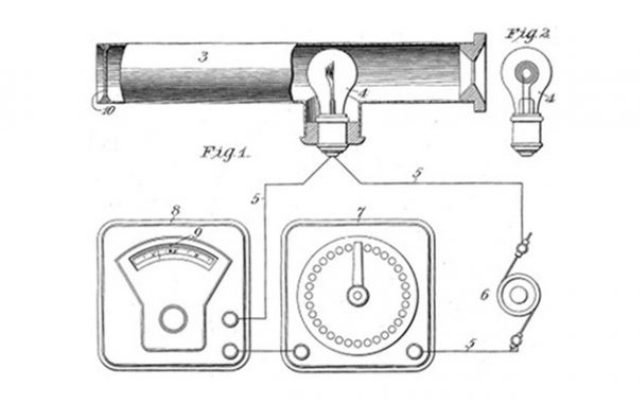 The principle of operation is similar to those that are still manufactured today: the brightness emitted by a surface is compared with that of a lamp —regulated by a rheostat—; when the brightness coincides, the approximate temperature is searched on a dial. In the first models this brightness was compared through a principle called evanescent filament: the light of the object to be measured was superimposed on that emitted by an incandescent filament; By varying a rheostat, its brightness increased or decreased, with which it was possible to make both coincide, with which the filament seemed to disappear.

In the pyrometers Today, light is also compared using different optical filters that absorb unnecessary wavelengths – and reducing the intensity of the light, in order to make its operation safe – allowing only wavelengths close to red to pass. A lamp, powered by a battery, provides a reference light. Focus is placed on the filament, and the dial begins to turn; There are three possible options in this operation: 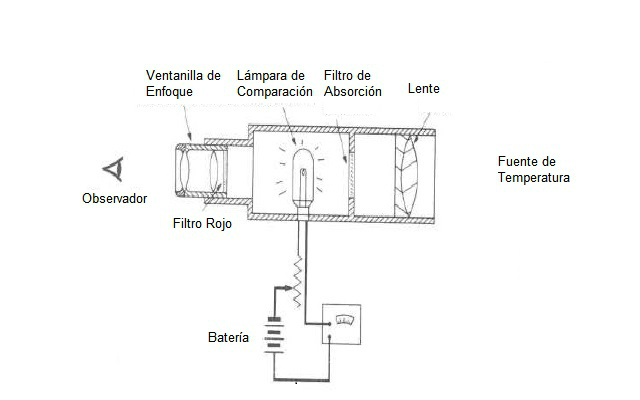 What uses does it have?

All industry where it is necessary to measure the temperature of hot objects (above 700 ° C), the pyrometer will be a necessary instrument.

It is used, for example, in blast furnaces to determine the temperature of the pig iron inside the crucible, or after bleeding from the furnace. It also finds use in foundries of iron, lead, aluminum, copper and other metals, to know, at a glance, if the metal reached the melting temperature.

Other uses can be applied in glassware, where it is necessary to know precisely the temperature of the molten glass; in blacksmiths, to determine if a metal part is ready to receive a heat treatment or to be subjected to plastic deformations on the forging; in general, to control the temperature of furnaces intended for melting or heating different materials.

Advantages and disadvantages of the optical pyrometer

Like all direct measuring instruments, the optical pyrometer it has advantages and disadvantages derived from its design. Let’s see what they are. 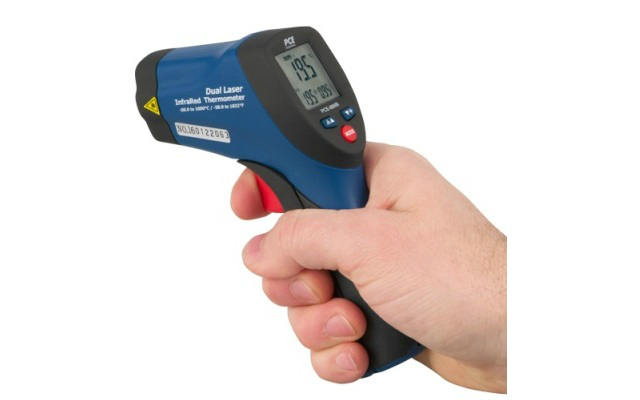 At present the optical pyrometer it is being replaced by more modern and versatile instruments, such as the radiation pyrometer or the infrared thermometer. The latter operates by means of a laser, which is aimed at the surface to be measured; on a digital display you can instantly read the temperature of that surface. This instrument, in addition to being simpler to operate, is more versatile, since it allows measuring a much greater range of temperatures — and, in the more sophisticated models, it even allows measurements to be downloaded via Bluetooth or USB.

The radiation pyrometer is another classic instrument, used for even higher temperatures (such as those that titanium could give off when it reaches its melting temperature, for example).

There is a simpler instrument, which could also be classified as optical pyrometer, which simply consists of a scale with a gradient that goes from dark red to white; By comparing the color of the hot object with that scale, it is possible to obtain a constant that is then searched for in a table, tabulated according to different materials.

It is also necessary to take into account thermal imaging cameras, which combine the advantages of the optical pyrometer with the simplicity and immediacy of the measurement of infrared thermometers: the user can see on the screen, in false colors, not only the temperature of an object but also superficial variations, in an immediate way.

Compressor What maintenance and care does it require?