What is Plasma Cutting?

Traditional machining techniques employ machines with sharp tools, either to cut and/or shape the material or to remove excess material. Examples range from milling machines to lathes and include abrasive machining methods as well as machining and non-machining.
In addition to these techniques, there are, however, other non-traditional techniques in which machining operations are not performed with sharp tools, but instead involve various forms of energy. That energy can be mechanical, thermal, electrochemical or chemical, so the processes that use them receive the same name.
Given that from now on we will see some of these unconventional machining processes in DMyH, let us briefly review in the following table the main characteristics of these processes and their most commercially important applications.

In this article we are going to learn about one of the applications of thermal processes that involve an electric arc cutting technique: plasma cutting (PAC), as well as the machines used for this technique.
Plasma is a gaseous electrical conductor with a high energy density, made up of a mixture of free electrons, positive ions, dissociated atoms and molecules of a gas, which is produced when a jet of said initially cold gas is heated with an electric arc and it is passed through a narrow hole to reduce its section.
Not only certain cutting operations use plasma, but also welding, using the well-known plasma welding process.
Conventional plasma cutting (referred to as dry plasma) uses a transferred arc, that is, an arc that is established between the electrode and the workpiece. At the beginning of the process, when the gas is not yet ionized, it is not possible to establish the arc, so a high frequency generator is used that produces a pilot arc between the electrode and the nozzle. The pilot arc heats the plasma gas and ionizes it. At this time the pilot arc automatically goes out and the plasma arc is stabilized.
The basic diagram of the process that we have just exposed is the one that we see in the following figure: 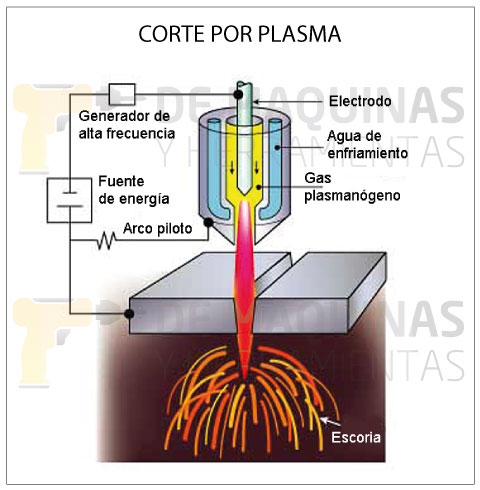 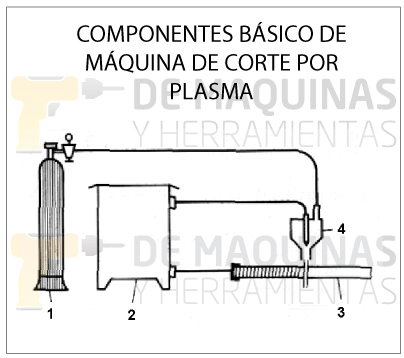 1 – Plasma gas cylinder: Every plasma cutting operation involves the use of gases (called primary gases) to create the plasma. The gas circuit is equipped with pressure gauge and regulator. The most used gases are air, nitrogen, argon with hydrogen or a mixture of these. Also common is the use of so-called secondary gases, or water, around the plasma jet, which help to confine the arc and clean the channel of molten metal to prevent slag build-up.
2 – Power source: it is generally a single-phase or three-phase power transformer, equipped with cooling, high vacuum voltage (100-400 V) and constant current.
3 – Workpiece: Plasma cutting is used to cut almost any electrically conductive metal. Metals cut by PAC often include plain carbon steels, stainless steel and aluminum, but lately iron, copper, brass, bronze and titanium are also being cut.
4 – Torch: it is the piece that makes the cut and is equipped with hoses for compressed air and electricity and with a series of elements that we will see in detail below.

Basic plasma cutting equipment
Although there are different plasma cutting techniques and, consequently, different equipment that we will see in another article, for now we are going to focus on the description of a conventional portable equipment, that is, the one where the arc is established between the electrode and the Workpiece.
The diagram of a device with these characteristics is detailed in the following figure: 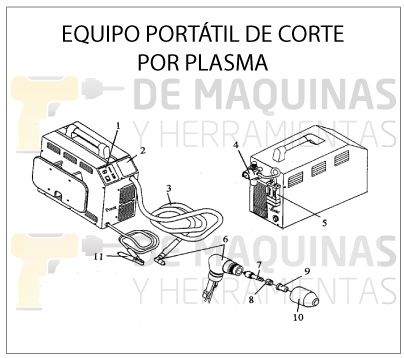 1 – Dashboard
2 – Access panel
3 – Torch Hoses
4 – Regulator / Filter
5 – Filter Assembly
6 – Assembly of the torch head:
7 – Electrode (consumable): it is tungsten or zirconium, depending on the gas to be used; the tungsten one is pointed (like the one used in TIG welding), while the zirconium one is flat with a copper coating.
8 – Gas diffuser
9 – Nozzle (consumable): its function is to force the arc and direct the plasma jet. The size of the hole is directly related to the amperage and its size is greater the greater the current.
10 – Nozzle holder
11 – Ground clamp
In a future article we will describe in greater depth the equipment used for plasma cutting, as well as some of its main characteristics.

How to cut porcelain?

Introduction to the Sierra de Copa

How to choose a saw according to the work to be done?