When we introduced the line laser level we made a brief mention about the color of the laser beam that this and other measuring instruments, such as rotating laser levels, project onto walls, floors or ceilings.

To this end, the current market mainly offers two color options: red and green. This is not due to aesthetic or marketing reasons, but to reasons duly supported by both human physiology and the manufacturing industry.

If we know these reasons, we will see that it will be much easier to make a decision about which laser line color to choose for a laser level effectively carry out our daily tasks. Then, What is the difference between a green line laser level and a red line laser level?

What color do we see best?

The human eye has a high sensitivity to visible light, which covers a small region of the electromagnetic spectrum comprised in a wavelength range between approximately 400 and 700 nanometers, where the color varies from violet to red, as we see in the following figure.

However, direct sunlight also plays a role in the visibility of a laser beam. Therefore, if we are outdoors and in full sun, the difference between a red and a green beam is not too noticeable. This means that regardless of whether we have a line level or a rotary level, and whether the laser is red or green, we will need a receiver to visualize the beam clearly.

The advantage, therefore, is the interiors, where the difference between one color and another of the laser is perceptible, both in low light conditions, for example, basements, and in areas with a lot of light, such as in the vicinity. of windows.

This improved viewing requires no detector for indoor work and ensures the projection of a continuous line that can be viewed for a greater distance than the red laser, saving time for instrument set-up and job completion. 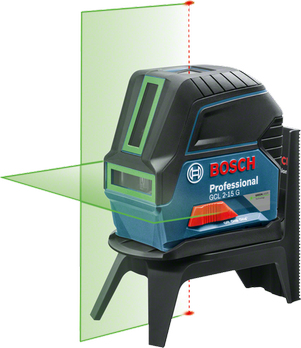 What characteristics do green laser diodes have?

As we noted earlier, the green beam levels have a laser diode that is 20-25% more expensive than the common red variety, although these costs are currently trending downward.

A single diode is used for rotating levels, so the additional cost does not translate into a large price difference compared to a red beam level. However, the line levels and especially the combined levels (lines and plumb points) can incorporate six diodes, which would double the cost compared to the red beam version. For that reason, many manufacturers use green diodes for the lines and red diodes for the plumb points.

Green diodes, on the other hand, tend to consume more power to operate and are more sensitive to heat, for example when heated by exposure to sunlight, resulting in a dimming of light intensity. Although this effect is observed with all diodes, the intensity of green light diodes tends to decrease at lower temperatures than the others. Once they cool down, the intensity of the light normalizes.

However, none of these peculiarities of green diodes is capable of dissuading a future buyer, and this is attributed to the advantages they present.

When to buy a green laser level?

The question that every user must ask when deciding on a green or red beam laser level must be related to the environment where they normally do their work.

If the tasks to be carried out are exclusively outdoors, for example, leveling for plumbing work or earthworks, there is no big difference between opting for a green laser, even with high output power, or a red laser. In this case, the selection will be conditioned to the personal preferences and budget of each buyer.

On the other hand the green laser It will be the preferred choice of carpenters, electricians, siding and installers of drywall, interior walls, suspended ceilings and kitchens, as well as any other professional who works indoors, or alternately indoors and outdoors. The green light beam will provide a much sharper line that can be seen clearly without using a detector, even in unfavorable lighting conditions, such as bright environments.

If this is the situation, it will be a matter of analyzing the incorporation of the green lines laser level to the set of tools for the indicated jobs, or for the usual tasks that require this type of measurement tools.

Why use stainless steel tools? Advantages and differences

Maintenance and safety in the use of the pipe wrench