What to take into account when choosing an Autogenous Welder? 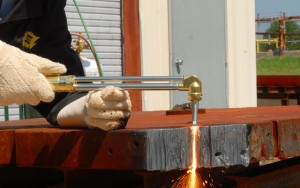 «Wherever there is a successful company, someone once made a brave decision». peter drucker

Today there is a wide variety of methods for autogenously welding parts, that is, without the presence of flux or filler material. To know what type of tiler and/or method is the most suitable, probably the most important thing to define is the type of part to be welded, its material, its dimensions and, of course, without being a minor variable, the economic cost. when purchasing equipment.
According to the work to be done, below are the different welding methods available to small and medium entrepreneurs with their respective field of application:

What to take into account when choosing an Autogena Welder?

As can be seen depending on the application, not all methods are interchangeable with each other. In addition, operator experience is required, or at least the ability to handle the different techniques so as not to endanger physical integrity or the work to be performed.

Oxy-hydrogen welding, considered one of the highest temperature flame techniques in history (2,000 °C), used to be used for thin plate work (around ½ inch) and precision parts. In the middle of the 20th century, welding equipment consisted of an oxygen tube and a hydrogen tube. Then it fell into disuse and was replaced by oxy-acetylene, since it could reach higher working temperatures. Today this technique is back in force, widely used in non-ferrous materials, such as parts for automobiles, air conditioners, refrigerators, cables for transformers and storage batteries. Not only does the industry require this type of welding, but today there are oxygen-hydrogen generators that are portable, weighing from 9 to 50 kg, and are quite cheap. They are paid only once and the only thing they use is distilled water (up to 0.33 liters/hour for larger equipment) and, of course, electricity. They are usually single phase and there are 220V/110V versions. Through the process of electrolyzing water, pure hydrogen and oxygen are obtained, generating a concentrated oxyhydrogen flame that can reach 2,800 °C, ideal for high-precision welding. As advantages, it can be mentioned that the oxyhydrogen flame does not release any carbide, therefore black spots do not appear after welding. There are also no by-products such as carbon dioxide and monoxide, which are toxic to the operator and so common in welding techniques that use hydrocarbon gases. In addition, by ruling out the presence of gas cylinders, the danger of possible explosions is reduced to zero. Probably the most outstanding advantage is that the oxyhydrogen flame has a low density and when it comes into permanent contact with copper, silver and ferrous metals, it does not generate copper or silver acetylides that can explode upon impact or friction, as occurs with acetylene gas. . The disadvantage of this welding system is that it cannot be used for heavy industry, since it requires a higher heat input. 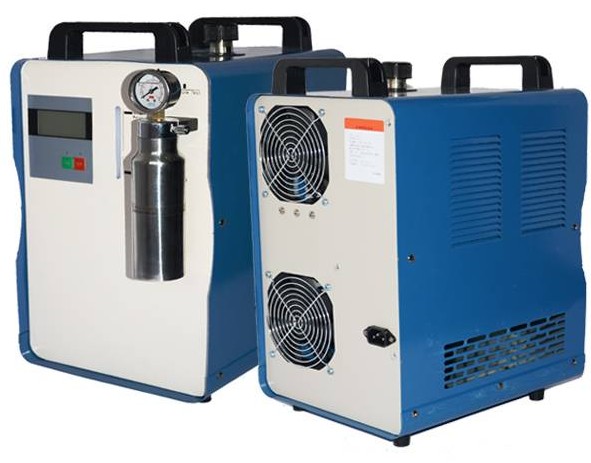 Oxy-acetylene welding is probably the most widespread. Its flame reaches a temperature of up to 3,200 °C, making it versatile for various materials. The necessary equipment is simple and portable. It consists of an oxygen tube, an acetylene tube, and a kit of parts that includes hoses, regulating valves, pressure gauges, torch and nozzles. One of the main advantages of this technique is that it does not require electrical sources to be able to work, with which the savings from the electrical point of view are total. On the other hand, once the equipment is purchased, it can be used to perform cutting, bending and straightening work. The torch is 100% adjustable, being able to achieve the desired effect in the welded joint. As disadvantages, it can be mentioned that acetylene is highly flammable if it comes into contact with materials such as silver, mercury and alloys with more than 70% copper. On the other hand, a polymerization process of this gas can occur at normal atmospheric pressure and at least 480 °C. This generates some unwanted compounds for the welded joint and for the health of the operator, benzene being one of the main ones. Like any offer on the market, today there is a wide variety of nozzles and torches, most are identified by a number, and to know with what pressure to regulate both the oxygen outlet and the acetylene outlet, the manufacturer’s instructions must be followed. As a general rule and due to the danger of explosion, the service pressure of acetylene must never exceed 1 bar (1 kg/cm2 or 5 psi). As a general recommendation, the operator has to obtain the proper mixture between oxygen/acetylene by regulating the pressure of each gas (approximate ratio of 1.5:1) and the speed of the flame. Also, you should clean the nozzles regularly, as they can char and pop or flash back during operation. The flashback phenomenon is not only due to dirty nozzles, it can also occur as a result of nozzles with holes that are too large or small, clogged non-return valves, improper gas ratio, for example. 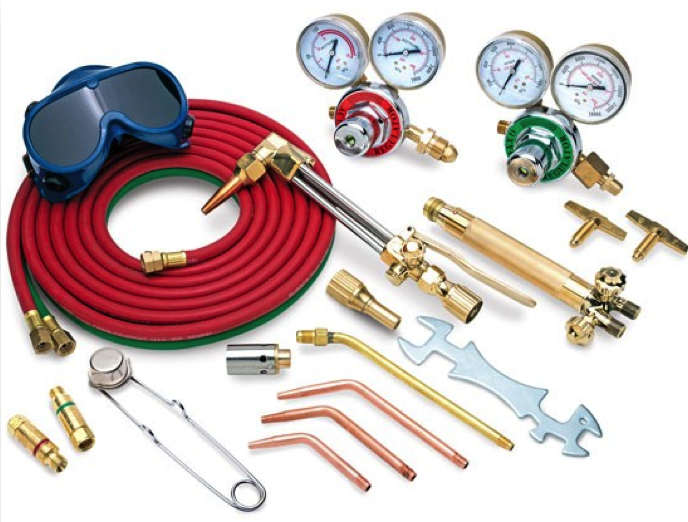 Oxy-gas welding, the gas used being a mixture of butane-propane, is widely used by the blacksmith, gas fitter or plumber by profession. In this case, the materials to be welded must be soft, with copper pipe welding being the most frequent operation. The gas cylinder is easily purchased at any hardware store, is quickly refillable, and is much cheaper than an acetylene tank. The torch and nozzle kit is not interchangeable with the oxy-acetylene kit, since detonations and flashbacks of the flame can be generated, even the torch could explode. The gas premix chambers are quite different for both systems. As an advantage, this technique can be used by hobbyists or workshops that make repairs in general. The disadvantage is that the flame formed by oxygen and propane does not reach 3,000 °C as with the oxy-acetylene welding method. 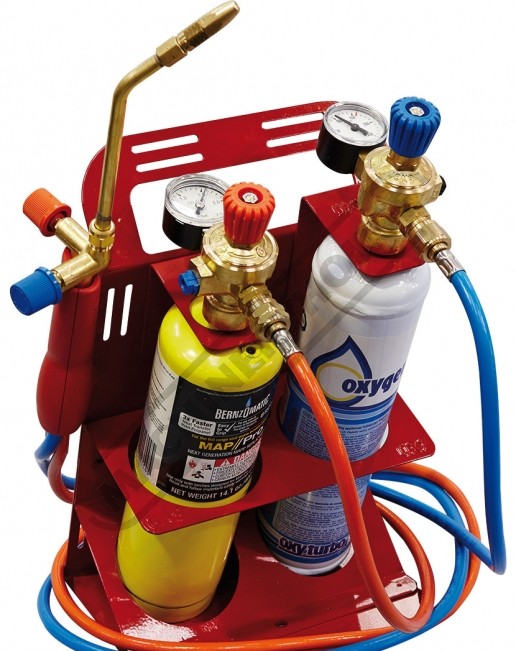 Another widely used method is oxy-gas welding. The gas used, in addition to oxygen, is also acetylene, with the difference that it is generated inside a cylindrical device called a gas generator, to which calcium carbide stones and water must be added. When purchasing such equipment, the manufacturer’s instructions must be followed. There are acetylene generators by immersion of carbide in water, those that combine immersion and dripping, and those that feed carbide with or without gas pressure regulation, among others. In general, the cylinder has two tanks, an upper one through which the water enters and a lower one, included in the first, with a hermetic opening and closing chamber where the carbide stones are placed. A drip system allows water to fall on the stones, generating a chemical reaction where acetylene gas is released and rises towards a gas trap.

Although this system is quite cheap, it has the disadvantage of having to constantly control the gas pressure, which must not exceed 1 bar, as mentioned above. When the acetylene pressure is dangerously close to this value, the water stopcock must be closed. Once the gas pressure drops to 0, water is supplied again and once the service pressure is reached, the water supply is cut off again. The gas generating equipment for the workshop operator available on the market ranges from 1 kg to 15 kg of capacity. It should be noted that larger cylinders are not easily transportable, which is why it is preferred to have them as permanent equipment on jobsites. On the other hand, it is not recommended to use ordinary water, if not distilled. The regular supply water tends to corrode the cylinders where the acetylene is generated, endangering the integrity of the operator and the surrounding facilities. As for welding techniques, those already mentioned in the second section of this article are valid. 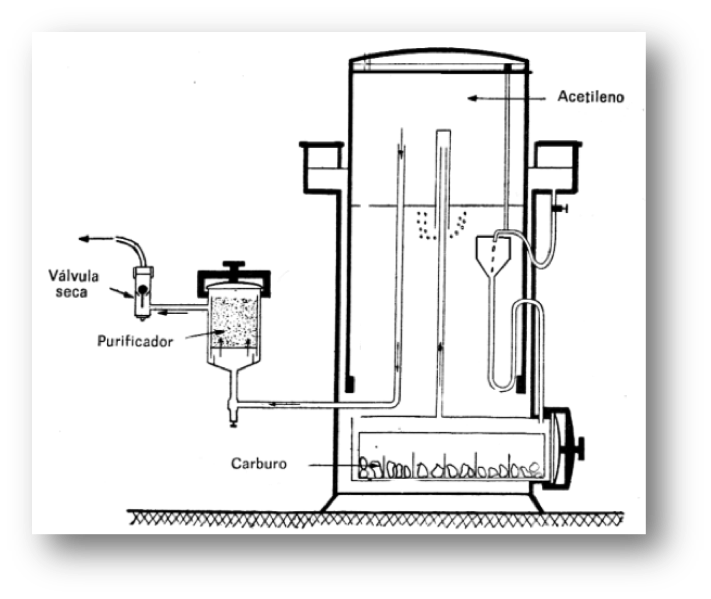 As a summary, below is a table with the advantages and disadvantages of each autogenous welding technique, including an indicative price guide in case you wish to purchase this equipment:

You are now in a position to decide which autogenous welding equipment meets your expectations.