What uses and practical applications does a temperature chamber have? 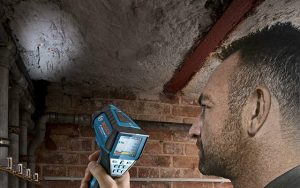 The temperature chamber (also called thermographic camera or thermodetector) allows us to visualize, on a monochromatic scale or in false color, the temperature differences in a given surface or area. This is very important to detect hot areas, frictions, short circuits and other physical phenomena whose manifestation is the increase in temperature, since otherwise we would have to apply much more expensive, cumbersome and indirect techniques.

In a previous article we saw the beginning of thermography; We will see below which are the most frequent uses, and which professionals are the ones who get the most out of it.

Every electrical panel is exposed to failure due to overheating. For example, it may happen that, due to an inappropriate calculation, a 20A and 220V thermal tap is exposed to much higher currents (when connecting a very powerful air conditioner, for example). In that case the temperature chamber or thermographic camera It will allow the problem to be easily detected by showing the overheated key directly to the operator.

Another heavy use of the temperature chamber or thermodetector it is the detection of hot spots in electric motors – generally in shafts, rotors or stators. An electric motor can overheat if friction occurs between moving and stationary parts, due, for example, to faulty bearings or damage to the winding causing unbalance or jitter.

In this case, it is important to detect these anomalies in time, to avoid permanent damage to the winding or mechanical parts (which could, on the other hand, start a fire if proper maintenance is not carried out).

Presence of rust on cutting elements

In medium and low voltage applications it is normal to have cut-off valves (the so-called keys L) for single-phase and three-phase elements. In the contact points of these keys, some carbonic deposits can be generated over time that act as resistors, generating a focal increase in temperature. The temperature chamber or thermographic camera It allows detecting and registering the points where this phenomenon occurs and preventing electric arcs or sparks, which could cause the beginning of fires if there are combustible elements in the vicinity of the panel.

In the field of mechanics

There are various machines that make intensive use of the bearingsBoth friction and bearing: lathes, milling machines, bench drilling machines, motors. They are also widely used in means of transport, mainly the railway.

Detecting bearings In all these cases, it is decisive for the correct execution of preventive maintenance. Early detection of unusual temperatures allows replacement of bearings defective and avoid costly repairs and material losses, such as replacements of axle tips, tires, axles and rails (in the case of railway wheels).

Detection of friction in other moving parts

Friction can also occur in moving parts that are not bearings: racks, gears, pulleys, hoists, etc. These frictions can be due to a number of reasons: lack of lubrication, inadequate lubrication, wear on bearings, loss of keys, excessive stresses (bending, torsion, etc.), rust on moving parts and breakage of mechanisms such as springs.

In all these cases it is important to detect the area in which this friction occurs; without the use of the temperature chamber or thermodetector it would be difficult and expensive to do so.

All fires occur due to the concurrence of three factors: oxidizer, fuel, and temperature. The fire potential is often referred to as fire load and it is important to maintain strict control of the temperature sources in those rooms where combustible materials are deposited.

The temperature chamber or thermographic camera allows a fast, safe and effective inspection of the environment, to detect in time any possible source of high temperature.

In homes with air conditioning or heating it is important to inspect the openings and other surfaces to find any point where there is a failure in the thermal insulation. These can occur due to damage or lack of weather stripping on the enclosures (doors and windows), or due to a lack of insulating material on the walls or ceilings.

Leaks can be easily visualized with the use of the temperature chamber or thermographic camera: they are perceived in a reddish color, similar to that of the internal temperature (if it is heating) or in a bluish tone if it is cooling.

Another interesting use exists for the home and industrial refrigeration technician: the analysis of the image of the radiator of a refrigerator can give a clue about possible breaks or micro-leaks of gas, or deficiencies of another type that prevent the correct transfer of heat from the radiator to the environment.

Comparison of different brands and models

Next we will see a table in which the comparison of different models and brands available in the market is made. There will be a separation between the basic models and the professional ones.

What is an Odometer or Topometer?

What are pipe or tube benders?